I would prefer, of course, to start this series on the Cochrans with the pioneer among them who was the first to land in America.  So far, that information has eluded me.   What I have instead is William Cochran, a sub-lieutenant during the Revolutionary war, migrant from Maryland to Pennsylvania, and father of the first Cochran to move from Pennsylvania to Ohio.  This prosperous William helped keep the Army’s books as a sub-lieutenant during the Revolutionary War and saw some involuntary action during the Whiskey Rebellion.

The information that I have about This early William Cochran comes almost entirely from a paper entitled The Identity of William Cochran, Sub-Lieutenant of Westmoreland and Washington Counties 1777-1783. This well-researched paper attempts to lay out the weaknesses in the evidence as well as the strengths.  It was sent to me by a distant cousin found through Ancestry.com (YAY!) but so far, I do not know when the paper was written, or by whom (SIGH!) The paper is footnoted (YAY!)

It might help to retrace my relationship to the Cochrans.  I have previously written about Emeline Cochran Stout, who was the mother of my great-grandfather, “Doc” William Cochran Stout.  I wrote about Emeline’s father, Col. William (grandson of today’s subject) in an article filled with doubts. After pursuing Emeline’s family, I threw up my hands in despair.

I have a complaint to lodge with the Cochrans of America, late of Scotland–you have too many Williams and Alexanders in too many branches of your family.  Therefore I must start every post about a Cochran with a disclaimer.  “I am presenting what I have been told. If it has been confirmed by some primary source, I will share that. Otherwise, take it all with a grain of salt.”

However that changed somewhat when a very helpful distant cousin surfaced with nearly twenty pages of documents about the Cochrans of Guernsey County, Ohio.  I was once more drawn into the world of interrelated Alexanders and Williams living in Ohio, Illinois, West Virginia, Iowa, and I now learned–California.

One thing that did seem certain–my mother was dead wrong when she claimed that Emeline Cochran Stout’s father or grandfather came over from Scotland.

According to this paper, William Cochran, soon to become a sub-lieutenant, arrived in Pennsylvania from Maryland about 1742.

Sells Salt to the British Army 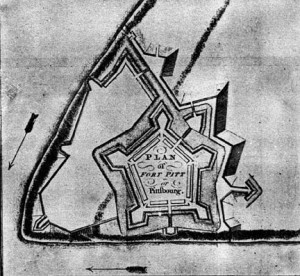 In 1761 A British Officer at Fort Pitt says that a William Cochran who lived just outside the Fort, was a member of the militia and sold salt to the British.

His son Alexander, was born in 1765 near Fort Pitt. He and his wife, whose name is unknown, had two more children, Mary Elizabeth and Jacob.

A main road ran from Fort Pitt along Chartier’s Creek to what is today Canonsburg and Washington.  Some well-to-do families lived in this area, called “Shurtee”–the English settlers version of the French name Chariters.  A William Cochran who lived here, had 220 acres called Newberry along MIller’s Run near where it flows into Chartier’s Creek.

What is a Sub-Lieutenant?

The document mentioned above says that William Cochran was appointed Sub-Lieutenant of Westmoreland County March 3, 1777.  By August 28, 1783, when he was released from duty, the area where he lived had become Washington County

During the Revolutionary War in Pennsylvania several men in each county were designated as Sub-Lieutenants of the County serving under the County Lieutenant who was the highest ranking militia officer and/or directly with the Supreme Executive Council of Pennsylvania.  Sub-Lieutenants may have had the militia rank of Major [see below for different information]. It is likely that the Sub-Lieutenant was a man of some social position who was entrusted to take care of the finances of the militia and or other government business.

The “Act to Regulate the Militia of the Commonwealth of Pennsylvania” passed 17 March 1777, and the the subsequent Militia Act passed March 20, 1780….

The act called for eight battalion districts to be created in Philadelphia and in each of the eleven extant counties. The geographical boundaries for each district were drawn so as to raise between 440 to 680 men fit for active duty as determined by information contained in the local tax rolls. A County Lieutenant holding the rank of colonel was responsible for implementing the law with the assistance of sub-lieutenants who held the rank of lieutenant colonel. Though they held military titles, these were actually civilian officers not to be confused with the military officers holding the same ranks in the Continental Army. The County Lieutenants ensured that militia units turned out for military exercises, provided the militia units with arms and equipment at the expense of the state, located substitutes for those who declined to serve, and assessed and collected the militia fines. It should be noted that these fines were not necessarily intended to be punitive. Recognizing that personal circumstances might in some cases make it inconvenient or even impossible for a particular individual to serve, the fine system was in part devised to provide money in lieu of service in order to hire substitutes. It also provided an avenue for conscientious objectors to fulfill their legal obligation to the state without compromising their religious convictions.

This indicates that this early William Cochran might have been called Colonel. It was a real war time title–just not a military title.

In 1783, There is a William Cochran listed on the Washington County tax list, living on 200 acres with a personal worth of 113 pounds.

In 1788, although his farm, Newberry, stayed in the same place, it was incorporated in the new Allegheny County.

In 1793, William Cochran and others petitioned for a Presbyterian Church to be chartered in the Chartiers area.  The author of the biographical paper says that a Reverend John McMillan came to the area in 1776 as the first settled minister in the area (as opposed to circuit rider). It is believed that Reverend McMillan married Alexander Cochran and his wife Sarah Adams.

Victim of the Whiskey Rebellion

In 1791, when Alexander Hamilton proposed taxing the production of whiskey to help the federal government pay off the Revolutionary War Debt, people in Western Pennsylvania rebelled after two years.  The Whiskey Rebellion was put down quickly, but William Cochran got caught in the middle.

William Cochran, according to tax rolls, had a saw mill, a grist mill and two stills. Although there is no evidence he was involved in the rebellion, his stills and mills were “deliberately broken”.

He apparently rebuilt because his estate appraisal on May 24, 1803, includes the mills and stills, along with personal property appraised ta a whopping $2171.  The bio states, “It is obvious from the inventory that his man lived in style as he had silver buckles for his shoes, a silver pocket watch and books in his house.”

Hundreds of graves at the old Presbyterian church in the Chartiers area were destroyed, which may be the reason that no one has found traces of graves of William Cochran (1723-1802).

The Identity of William Cochran, Sub-Lieutenant of Westmoreland and Washington Counties 1777-1783. Unknown author. After 1996. Paper e-mailed to me by Tom Fowler.

Some relevant footnotes from that paper:

Genealogical and Biographical History of Allegheny County, Penna, 1889 and 1975,[ Digital Library of University of Pennsylvania,] by Thomas Cushing. [p. 156–William in Whiskey rebellion.]

History of Washington County, Washington, Pennsylvania with biographical sketches of many of its pioneers and important men by Boyd Crumrine, 1882, p. 876