A child born in a hacienda in the central valley of California in the early California could have held citizenship in three countries before she reached the age of thirty. The growth of early California was tumultuous. After being Spanish at birth in 1820, she would have become Mexican in 1822 when Mexico won its Independence from Spain, and then become an American in 1848 with the Treaty of Guadalupe HIldalgo, ceding California to the United States.

The History of Early California

Although the first organized party of settlers to reach California by land arrived in 1841, the state evolved quickly into a powerful force.  Gold was discovered at Sutter’s Mill in 1848, triggering a mass migration within the North American continent. Covered wagons headed West until in 1866 railroads started coming across the mountains. After the brief U.S.-Mexican war (1846-1848), California became a state in 1850.

Coming from Scotland and Across America

Several of my ancestors were part of this migration. The Cochrans  came from a long line of feisty people willing to “follow the money”. Jane Cochran married Robert Moore, and the Moore family also had emigrated from Scotland. The Cochrans/ Cochranes, Scottish Presbyterians, were drawn to Ireland both by an opportunity to be paid militia, and later by King James of England, a Protestant who wanted to squelch the Catholics of Ireland.  So firmly Scottish were they, that the clannish Scots never thought of themselves as Irish, even though some families lived in that country for generations. (Read the history of the Cochranes here, and learn why there are so many Williams and Alexanders in the line.)

When the Catholic Irish became tired of the Presbyterians and the English crown no longer supported them, our doughty Scottish ancestors headed for America, the land of opportunity. Once there, they kept pushing inland, away from the already settled lands and towns into the forested lands of Pennsylvania, and when that became too crowded they moved on to the Northwest Territory where they were Ohio pioneers.

Once they had leveled the forests and started thriving farms, established churches, schools and towns in the new state of Ohio, they looked for more opportunity, and found it in fighting in the War of 1812, the U.S. Mexican War, and the Spanish American War. Then came California, and the lure of Manifest Destiny.  They were determined to once again break new ground and be the first to profit from the riches of California–which naturally they believed should belong to the United States. 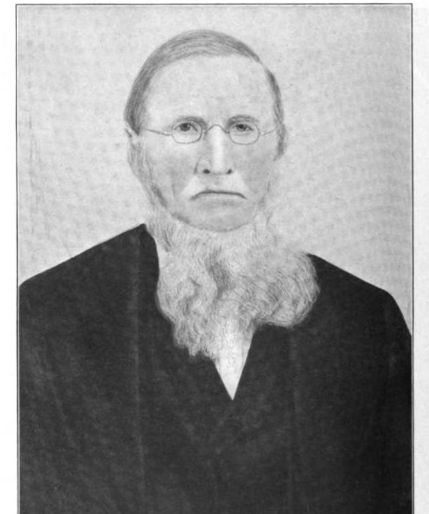 It might be helpful here to explain my connection to these California pioneers.

Who Went to Early California?

Jane Cochran Morrow Moore was the step-mother of Jacob G. Moore and George W. Moore, and the mother of Robert Alexander Campbell Moore who settled in California. Her other step children also moved to California when she and Robert Moore moved. Not all stayed.

Jane’s nephews John Henderson Cochran and Jacob Benjamin Cochran, and Alexander Cochran (sons of my 3x great grandfather Col. William Cochran) also went to California for varying lengths of time. There was also a James Cochran who went to California in 1852, but I have not determined his relationship to Jane, since there are several Jameses.

Robert Bines Moore fought in the U.S. Mexican War (1846-1848), and that was probably what gave him the idea to move to California.  Although I have not determined exactly when they moved their family, Robert had to be there prior to 1854, because he was elected to office in 1855. Their son, Robert A.C. Moore was born in Ohio in 1843, leading me to assume that there move was after the Treaty of Guadalupe Hildalgo in 1848.

Robert Bines Moore , known as “The General”, with his wife Jane Cochran Moore bought a portion of an old Spanish land grant called the Francisco Grant.  Once again, Jane, whose family pioneered in Guernsey County, Ohio, would become pioneers.

Their home was located in what would become Hamilton Township in Butte County. A busy town grew up near the Feather River and for some time was the county seat.  In addition to farming, Robert B. Moore also cashed in on the business generated by the Gold Rush by running a ferry in Butte County, over the Feather River. It was called the Hamilton Ferry, and he wills the license to his wife and son, but I can find no clue as to its exact location.

California became a state in 1850, but it took a while for the legislature to authorize the election of County Commissioners. When the first election for County Commissioners was held in 1855, Robert Bines Moore got the highest number of votes. A couple of years later, after new townships were organized, he again ran and again topped the number of votes.  He and his family obviously were very influential in their corner of early California. In 1862 his son, J. G. Moore was elected to the State Assembly. The following year he was elected as County Clerk, and at the end of his term two years later he was re-elected.  Meanwhile, son George was elected County Coroner.

Hamilton Ferry, however, disappeared. A history of Butte County states that “After the removal of the county seat to Bidwell the town languished and finally disappeared altogether.”  The town’s hotel burned down in 1865.  “Mr. Robert Moore [son of Robert Bines and Jane] is now the sole occupant of the town-site [ in 1882] and one visiting his pleasant home can hardly think what a busy little village was here.”

John was 32, married with a two-year-old and an infant in 1850. He kept a grocery store in Middleton, Guernsey County, Ohio. He and his wife had three more children in Ohio, and in 1857 they set off in a covered wagon for California. His wife, pregnant at the start of the journey, gave birth on the way across the Plains. He stayed in California the rest of his life.

Other members of the family engaged in gold mining. The 1860 census lists Jane’s nephew Jacob Cochran as a miner.  Like others who went off to strike it rich, he left his wife behind in Ohio. It is sad to see him listed in Butte County, California in the 1860 census, while his wife and six children, ages 5 through 14, are still in Guernsey County, Ohio.  He may have left Ohio as early as the end of 1854, at the first hint of the gold rush, since his youngest child was born in 1855.  After making some money in California, and serving a 4-month stint in the Civil War in 1964 (Corporal in Co. A, 142nd Infantry Regiment), he returned to his wife by 1870, but they were then living in Troy Iowa.

By 1880 Jacob Cochran was married to a second wife and they had a second child. Iowa was not his last stop as his 2nd wife and their large family had moved to Kansas by 1895. He would be an interesting character to research further, since he married a woman 30 years younger than he, and fathered his last child when he was nearly 70.  The circumstances of that 2nd marriage and what happened to the children of the first are a bit of a mystery. He died in Kansas

Another adventurer attributed his young man’s journey to the gold mining country as a great learning experience.  Alexander Cochran, another of Jane’s nephews (son of Col. William Cochran), went to California when he was nineteen (1951) and stayed six years according to a Guernsey County history. Alexander returned to Ohio with money in his pockets and helped grow the town of Cambridge before founding Quaker City.  Although he is buried in Quaker City, he died in West Virginia. The West Virginia death index lists his occupation as “capitalist.”

By 1860, the first Federal Census  conducted in California reveals a gold mine of information on these lands built around gold mining.

Son Jacob Gomber Moore (know as J.G.), 37, now married with two small children, is a Physician.  He owns $10,000 worth of land and employs four farm laborers and a Chinese cook, giving us an interesting glimpse into the life of wealthy American farmers. (As I mentioned above, he was elected to public office.)  But future census reports show his fortunes shifting, as he is living in California with no real estate value listed. He is working as a Clerk in the Customs House–no doubt a political appointment. He lived his life in California.

Who Were the California Settlers?

It is obvious that in Butte County, where Chico, California is now the County Seat, the attention had turned from gold to grapes (and wheat, olives, nuts and other crops).  Most of the people listed on the 1860 census surrounding the Moore’s are farmers. And the new residents came from every state and from many countries–Baden (Germany), Saxony (Germany), Ireland, England, Canada and China–especially China. 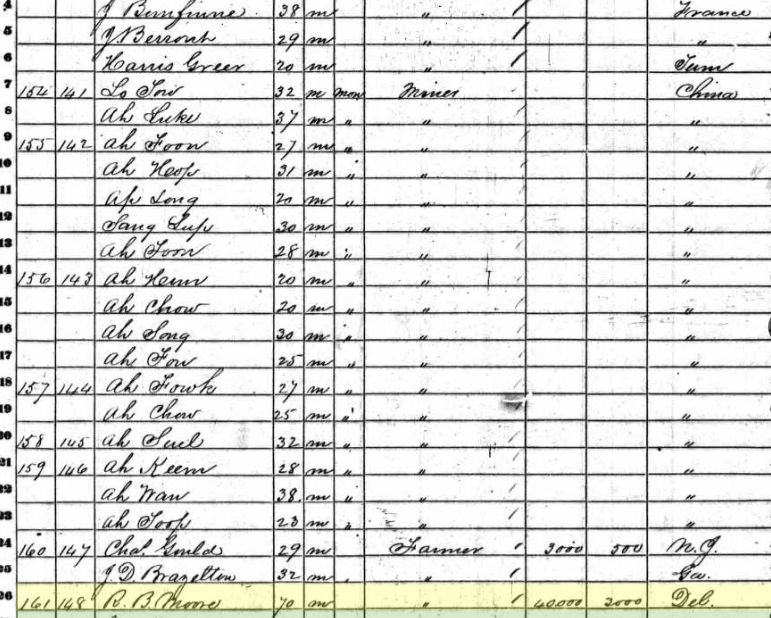 The exceptions to the farm occupations are a large number of neighbors with names like Lo Low, Ah Luke, Ah Long, Ah Foo, etc., all listed as miners–presumably gold miners, since this was a central part of the California gold rush territory. They are listed on three different pages in groups of two to eight or ten, which leads me to picture tents or small huts along the rivers where they panned for gold. All the non-Chinese on the census are engaged in agricultural activity. Only these Chinese are miners.

In 1850 fears by American miners that foreigners were taking away most of the gold, led to imposing a tax of $20 a month on foreign miners, but riots and unrest led to repealing that law the following year.  Two years later it was restored at $4 a month, showing that the resentment against foreigners was still there.

Another interesting fact turned up by this census is how very cheap land was in the early days of California. Robert B. Moore owned 1363 acres when he died in 1866, and presumably about the same in 1860.  In the census, his land was valued at $60,000 and personal property at $2,000.

History of Guernsey County, Ohio, page 368. excerpts on web site Ohio Geneaology Express. The article about James Cochran and others leaving for California published April 2, 1852 in the Guernsey Times.

1 thought on “Early California : The Cochrans and the Moores”