As you may have previously noticed, I have another blog called A Traveler’s Library. Although I don’t add reviews to that site anymore, I posted more than 1000 reviews over a five year period. Some were written by guest authors but most I wrote myself. It is hard to break the habit of reviewing books, so when I find one of interest to family historians or to apron-wearers, like this colonial book with colonial orange cake,  I share information here.

Today I want to share the book, The Midwife’s Revolt, by Jodi Daynard . I highly recommend this book, particularly because of its strong sense of time and place–the Boston area during the Revolutionary War. It takes place mostly in Braintree–now Quincy, Massachusetts.

Obviously the author is well versed in American colonial history and did voluminous research to present us with the details of everyday life in a young widow’s humble household. But all that accuracy does not slow things down. The characters are fascinating and the action simply flies along. The basic plot can be summarized as follows.

The husband of a woman in her twenties dies in battle on Breed’s Hill ( we think of it as the Battle of Bunker Hill). Our heroine, Lizzie, serves as community midwife in addition to keeping up with farm work. Her farm lies next door to home of Abigail and John Adams. Since John is gone much of the time–to Philadelphia and then as an emissary to France– Abigail and Lizzie become friends.

Lizzie’s life takes a more dramatic turn as she becomes dangerously involved in the fight for freedom.  The plot is exciting, but pinned solidly to earth by exposing us to the hardships faced by our ancestors in aprons who lived through the vicissitudes of the home front.

Lizzie copes with limited communications as she wonders if her brother is even alive.  Curtailed trade limits what people eat and wear and hunger becomes widespread as the war progresses. As midwife, she battles  smallpox epidemics as well as birthing babies. Her farm slowly dies off in a  drought. Lived so close to Boston  the “home front” faces real danger from the war with the British. And who can be trusted? It is a constant worry.

Another facet of the war is glimpsed when her long-missing brother arrives and she learns he has been on a merchant ship-turned sanctioned pirate craft.  He brings gifts to her that were destined for fancy Tory parlors in New England.  Among the gifts–oranges.

Lizzie makes a colonial orange cake and it sounded so good that I just had to try it.  Below I have the recipe as Lizzie presents it in the book, and then a slightly more modernized version. 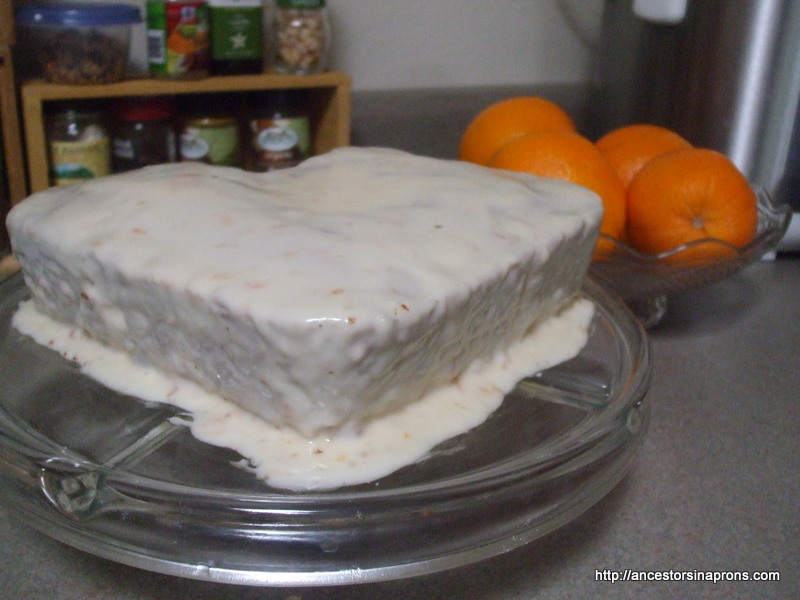 For the cake: Beat together eight soup spoons butter with one cup sugar until fluffy.  Mix in two eggs and three soup spoons juice from an orange.  In a small bowl, blend one and two-thirds cups of flour, a teaspoon baking powder, and half a teaspoon salt.  Add dry to wet mixture along with one cup buttermilk.  Blend well.  Stir in one cup raisins, half a cup chopped walnuts, and one soup spoon finely grated orange peel.  Pour the mixture into a buttered pan and bake forty-five minutes.  Cool before icing.

For the icing:  Stir two soup spoons juice of orange and two cups powdered sugar together until the sugar dissolves completely and the icing is smooth.  The icing should be thick enough to coat the back of a spoon.  If it is too thick, add more liquid; if too thin, add a little sugar.

I must mention that although the author, Jodi Daynard, went to pains to keep her recipe authentic (using soup spoon instead of the now standardized tablespoon), as all the details of Lizzie’s life and kitchen are, the book’s version is more helpful than most recipes you might read from Colonial times.  It is similar in that it does not specify a pan size or oven temperature (because, of course, Lizzie would KNOW what sized pan, and she would be cooking in a wood-burning oven.

However, Ms. Daynard’s book slipped up on one detail.  Her recipe for Colonial orange cake calls for one teaspoon of baking powder.  She probably meant to type soda and some well-meaning editor changed it for her. But Lizzie could not have used baking powder–it was not invented yet, and not in wide use until during the Civil War, not in use during the War of Independence. So the recipe you will find below is a more accurate reflection of how Lizzie might have made her cake.

I highly recommend both the Colonial orange cake AND the book! 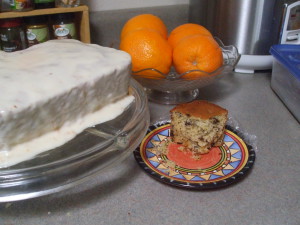 An authentic Colonial America orange cake with fruit and nuts.

The cake is delicious even without the frosting, but the frosting adds more orange flavor, and helps keep the cake from getting stale.

If you don't like buttermilk, don't worry. You can't really taste it in the cake. Although I have not tried a substitute in this particular recipe, it is generally fine to substitute an equal amount of plain yogurt or sour cream for the buttermillk. You can use leftover buttermilk to make Amish Buttermilk cookies and/or Better Buckwheat Pancakes.

If you use cake flour instead of all-purpose, use a full two cups.

If you use a glass dish, reduce the heat as suggested, and keep watch, because the baking time will vary.