It is time to follow my Dutch ancestors into the kitchen and make some Hutspot. 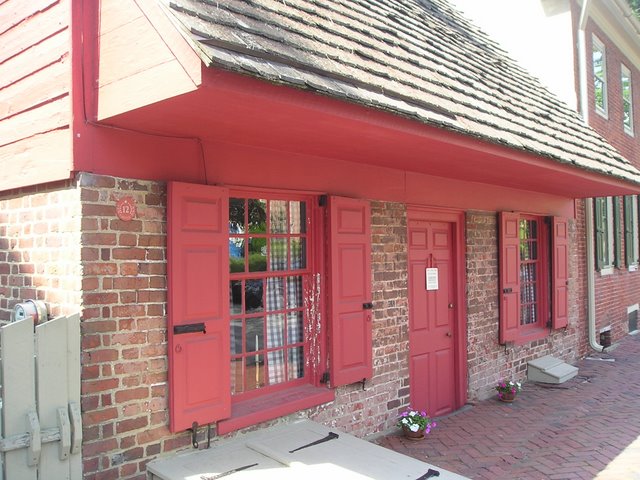 See the history of this charming house in Newcastle Delaware here.  While it has undergone many “updates” during its long history, the kitchen was restored with loving care to its early roots. 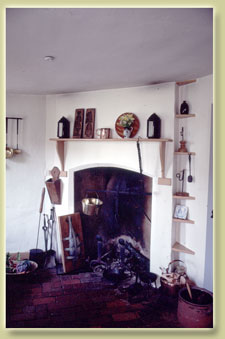 The kitchen of the Dutch House in Newcastle Delaware

As I browse the Internet looking for some typical Dutch food, I am reminded of the close connection between Holland and Indonesia.  Those sturdy Dutch burghers had some decidedly spicy foods in their repertoire.  But the Dutch American pioneers who settled Nieuw Amsterdam–some at the same time that my Puritan ancestors were populating New England–were up against the same constraints that the Puritans were when it came to exotic ingredients. So they probably stuck with mixing smashed vegetables with some cured meat.

Interestingly, one of the most popular group of dishes in the Netherlands today would not have existed in Europe prior to the settling of the Americas.  Potatoes made the trip from America to Europe in the 17th century, and the Dutch threw them into the pot to make a hearty supper that they had previously made with parsnips.

The one-dish meals, known as Stamppot, get their protein from cooking meat to make a broth, then cooking the vegetables (always including potatoes) in the broth. What makes it different than English stew is the fact that the vegetables are smashed–not left whole, and not finely mashed. The sliced meat is served on top or alongside the Stamppot.

According to Wikipedia (and numerous other sites), there is a legend that comes with the dish.

According to legend, the recipe came from the cooked bits of potato left behind by hastily departing Spanish soldiers during their Siege of Leiden in 1574 during the Eighty Years’ War, when the liberators breached the dikes of the lower lying polders surrounding the city. This flooded all the fields around the city with about a foot of water. As there were few, if any, high points, the Spanish soldiers camping in the fields were essentially flushed out.

So the Spanish soldiers fled, leaving a pot of parsnip (or potatoes) and carrots behind. The Dutch invaders unsheathed their forks and ate the “spoils of war”. The legend includes a holiday on October 3, when the victory over the Spanish is celebrated by eating a lot of hutspot.

Did you know that carrots used to be white or perhaps other colors, but when carrots arrived in Holland in 1740, they were bred to a bright orange color to honor the royal house of Orange 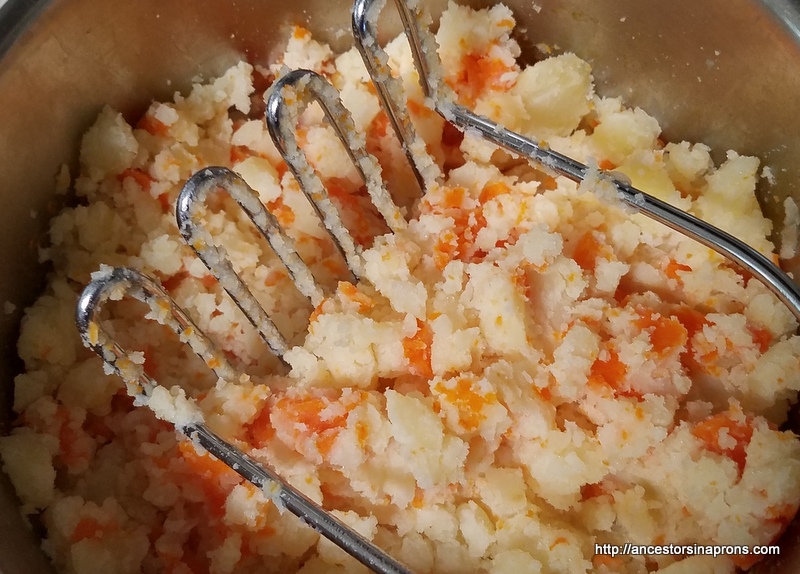 Hutspot is just one of an array of similar dishes that collectively are called Stampot–cooked potatoes smashed up with some other vegetables.

And on and on.

When I cooked Hutspot, I deviated from the traditional by leaving out the beef. Instead I served chicken with a Gouda cheese sauce, which allowed for dribbling some cheesy sauce over the Hutspot. Yum. 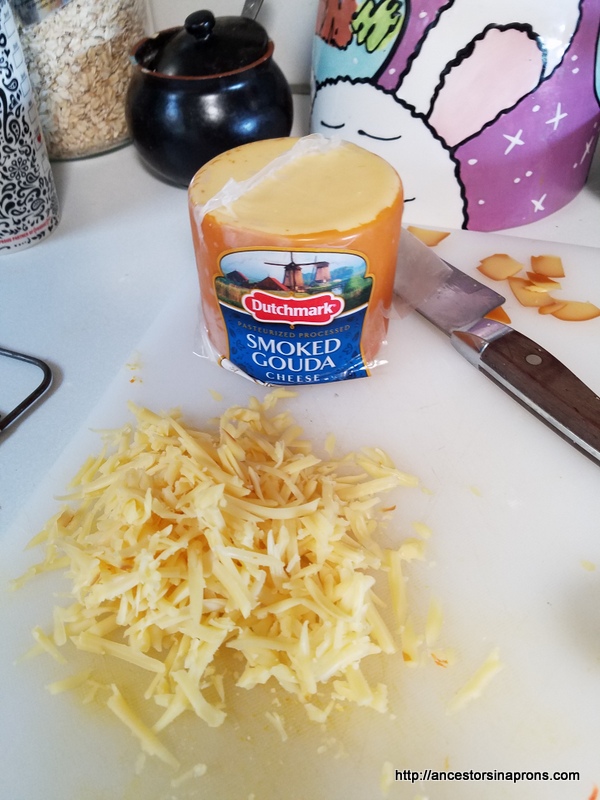 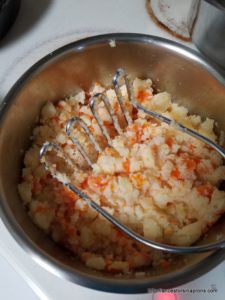 Hutspot is one of many Dutch one-pot meals smashing vegetables with potatoes and flavoring with meat.

Because I cannot eat onions, I left them out of my Hutspot. It would definitely be a different dish with onions, but I thought my version was very tasty. Since the Dutch use many varieties of this dish, the only "must" being the potatoes, feel free to experiment. Hutspot with potatoes, carrots and onions is just one possibility.

I also diverged from the traditional Hutspot by not preparing this with beef. The Dutch use a cut of rib that is not generally available in the U.S., but you can substitute Chuck. If you want to use it, cook the meat in water until tender, set the beef aside,keeping it warm, and use the broth to cook the vegetables. Serve the beef alongside the vegetables.

Do you want to learn more about Dutch cooking? I can see that as I investigate the lives of my Dutch ancestors, I will be returning frequently to a website called The Dutch Table.

This post is dedicated to my grandfather “Daddy Guy” (to the far left in the picture at the head of this page) and his mother, the all-Dutch Mary Brink Anderson.