NOTE:  Some readers of Ancestors in Aprons just want to hear the story. That is what you will find here. Some like to hear about the research. That is covered in a separate post.  If you want the details, read this.

When Abraham Brink (1780) and his adult children decided to relocate to Ohio in the mid 1830s, they were part of an enormous wave of people heading westward.  Ohio’s population tripled between 1820 and 1840. By contrast, it only increased by about 50 percent from 1840 to 1860. This huge influx was due to several factors.  The Indian wars had ended, the federal government was selling military reserve land, and roads, canals and railroads were entering the new state.

Abraham Brink (1780) was born around Bushkill, Pennsylvania.  He was born after the Revolutionary War, but before the United States Constitution was adopted in 1787, so county lines, and even state lines, were in flux.  His part of Pennsylvania, divided from New Jersey by the Delaware River, had been part of the colony of Virginia, and as his family went about their daily business, their land changed to Pennsylvania and their county, first Northampton and then Wayne, later became Pike.

Abraham, in later years, said he was born in New Jersey, but because his children were all born in Pennsylvania, they reported that he was born in that state, too.  All in all, a confusion of place dominates the Brink family story.

The area where he lived– from southern New York along the Catskill Mountains, northwestern New Jersey and northeastern Pennsylvania– had been settled mainly by Dutch families spreading out from New Amsterdam (New York).

Like so many early American families, the Brinks felt hemmed in by too many neighbors. After marrying, Abraham moved slightly north to Dyberry, the county seat of Wayne County, Pennsylvania.  This article points out the pleasures of that corner of Pennsylvania today, and a bit of its history when its economy was fueled by coal and a canal.

When they were in their late teens (16-18 years old) Abraham married a woman named Lucinda and they had at least eleven children between 1800 and 1824.

The family lived in Dyberry through at least 1830, despite reports on family trees that some of his children were born in other counties. In that decade, Abraham developed an itch to move further west. The new state of Ohio was calling.

After the Revolutionary War, the government set aside land in Ohio Territory to give to men who had fought in the army.  Those lands that were not used for that purpose, a Military District, were sold to settlers moving west into Ohio.

Abraham had apparently saved up money or was able to sell valuable land, because he bought four 40-acre parcels of land in Holmes County, Ohio, for which he would have paid $1.25 per acre.  Another two parcels were bought in the name of his son Mordecai, who would have been about 26 at the time.  All purchases were in the same section of land.

These purchases took place between 1835 and 1838 and by 1840, the family was settled in Killbuck Township, Holmes County, Ohio, with son Mordecai’s family living on an adjoining farm. Abraham’s wife Lucinda does not show up on the 1840 census, probably only Abraham W. and John, the youngest, are still at home. His oldest son, Jesse, originally settled in Richland Township, a neighboring area, but by 1850, he also was living near the other Brinks.

The daughters would have been old enough to be married by 1840. The 1840 census also shows two children between 10 and 14 that could be children who later died, or children of his older daughters who were living with their grandfather.

Deaths in the Family and Abraham’s Will 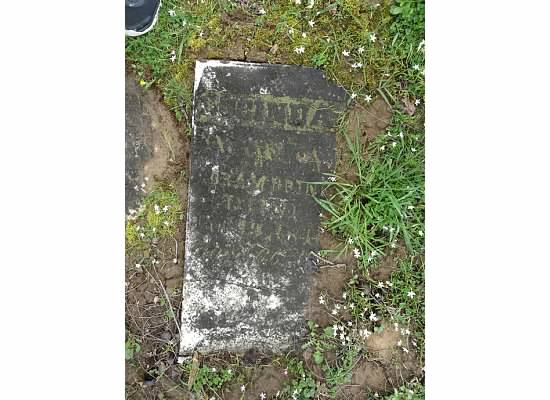 After Lucinda’s death ( in 1846 according to her tombstone at the Wolf Creek Cemetery in Holmes County) Abraham continued to live with his younger son John, even after John married in 1848. 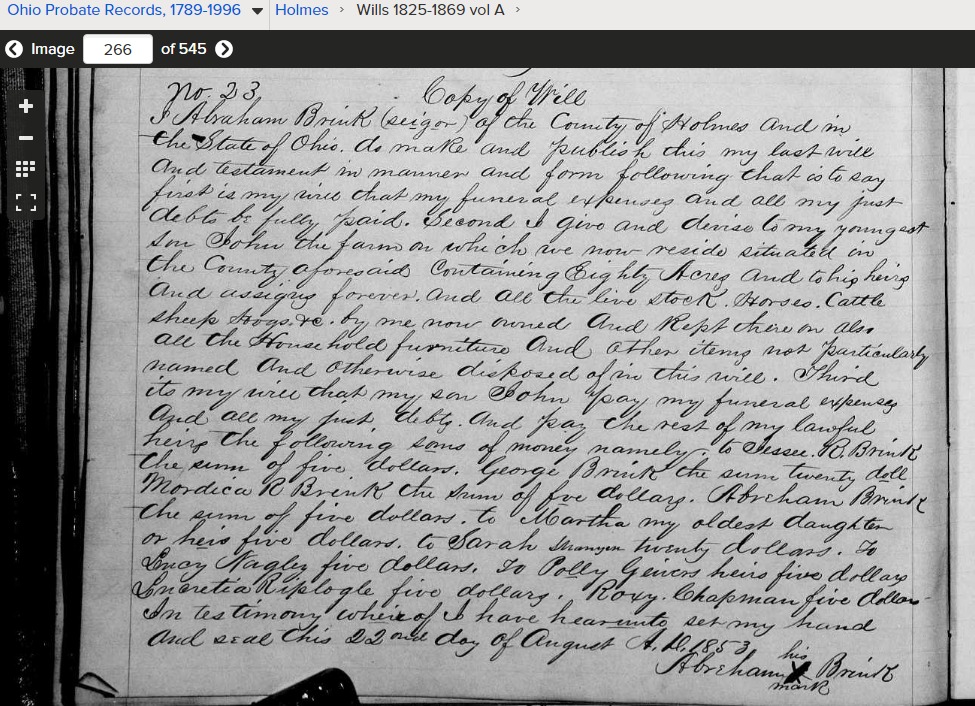 Abraham Brink the elder Will.

When Abraham Brink (1780) drafted his will in August 1853, it shows a man who had a substantial farm, and had plowed most of his money back into the land.  The property was all left to his son John who had cared for him in his later years, and the children received $5 each, except for two George Brink and Sarah S____ who received $20 each. It is an intriguing discrepancy that I may never be able to explain. I do know that George, unlike most of the family, was not a farmer. He was a shoemaker, who lives in a different county in each census year.

Abraham died in the month after he wrote his will and was buried at Wolf Creek Cemetery near his wife Lucinda.

While many of the family members continued to live close together in Killbuck Township, others migrated further west to Iowa and Michigan.  Even John Elisha Brink, who inherited the farm, moved to Michigan, apparently to be with a son who died at the young age of 39 of “dropsey.” (Accumulated fluid in tissues–perhaps congestive heart disease).

The story of Abraham Brink is not complete with his death. I am still missing a few important details.

If you want to know more details about the research behind this story, you can read the separate post dedicated to that research. (The usual notes on research can be found there, too.)