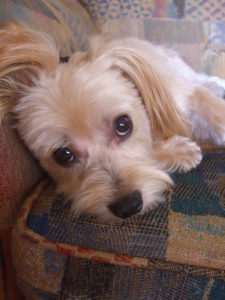 I’m a family member, too. 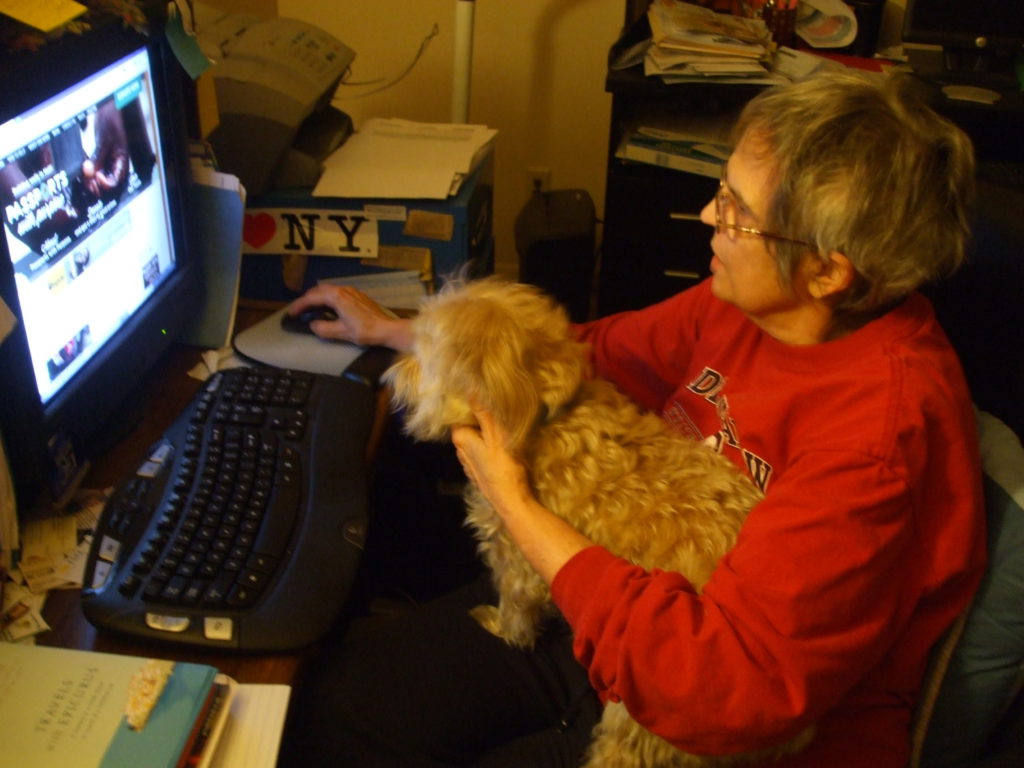 Bogie watches what I am writing. 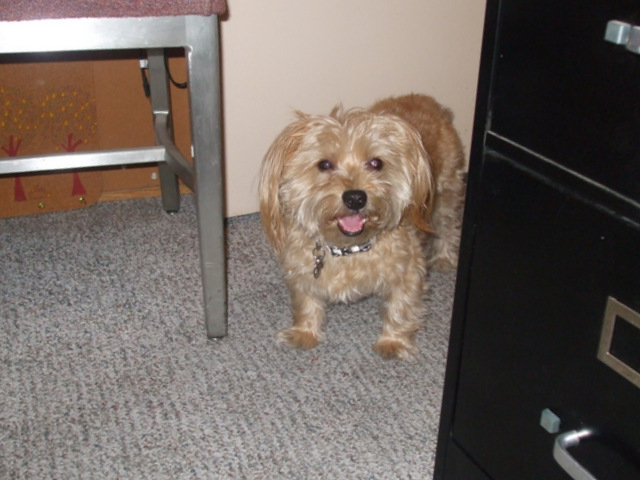 Bogie comes in the office as I’m writing. He has an urgent message.

Today he had a suggestion. “Are you writing about your family?” “Yes.” “How come there’s no one with fur or feathers in there?”

Bogie wants to know if there are other dogs in the family history, and so do I.  Has our family always been animal lovers? Most of the pets I have stories about come from recent history.

“A dog reflects the family life. Whoever saw a frisky dog in a gloomy family, or a sad dog in a happy one? Snarling people have snarling dogs, dangerous people have dangerous ones.”
― Arthur Conan Doyle, The Case-Book of Sherlock Holmes

The History of Animal Loves

The earliest ancestors on my tree were farmers and had a different attitude about animals. Animals worked just like everybody else. The Pilgrims, we know, included dogs on the Mayflower, although I don’t know about the Fortune, on which William Bassett sailed.

Jumping ahead to the 1800s, I know that my great-grandmother Isabella McCabe Anderson loved to ride her horse through the Ohio countryside, but of course although horses could become friends, they were a necessary adjunct to life.  My grandfather Doctor William Stout even had a barn behind his house in the center of Killbuck to keep the horses who pulled his wagon when he had to go on house calls in the countryside.

Speaking of Doc Stout, I have a picture of him and a matching one of his wife that would be absolutely wonderful had they not faded to unrecognizable blobs.  However, I can make out that there is a large dog sitting at the feet of Doc Stout.

And I have written about my mother’s pet Pony, Wrangles.

“If there are no dogs in Heaven, then when I die I want to go where they went.” Will Rogers

From the time my mother was in college until  I was a baby, grandma owned her favorite dog ,  Peggy. A snow white Spitz, Peggy bridged four generations of humans. She frequently sat for portraits, including one that shows my great-grandmother Hattie Morgan Stout who died before I was born. 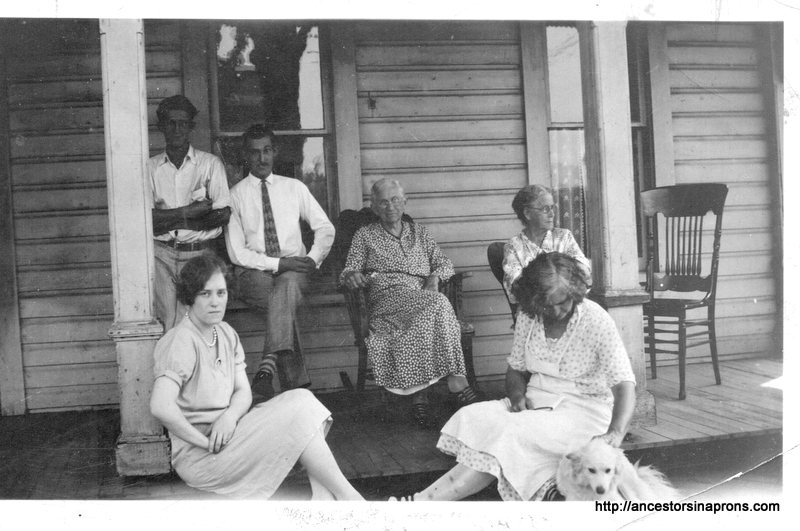 My grandmother Vera pets Peggy. In the center of the picture is my great-grandmother Hattie Stout, Vera’s mother. About 1925 when my mother was in college. 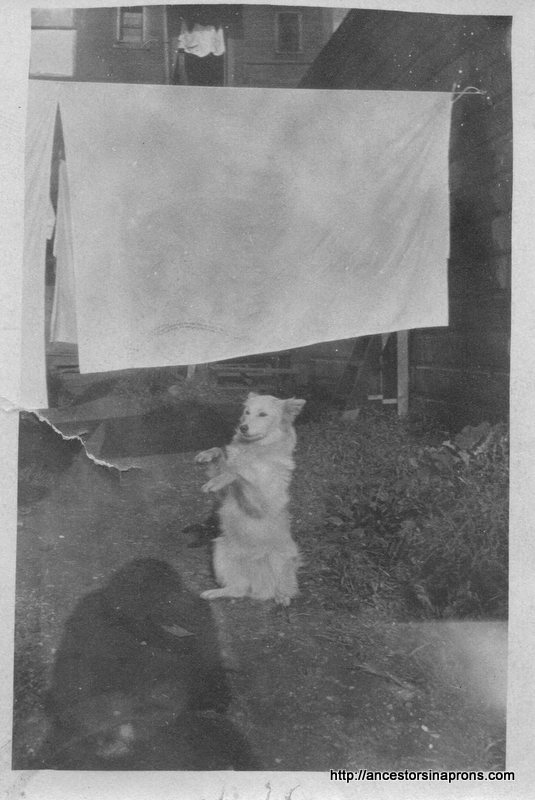 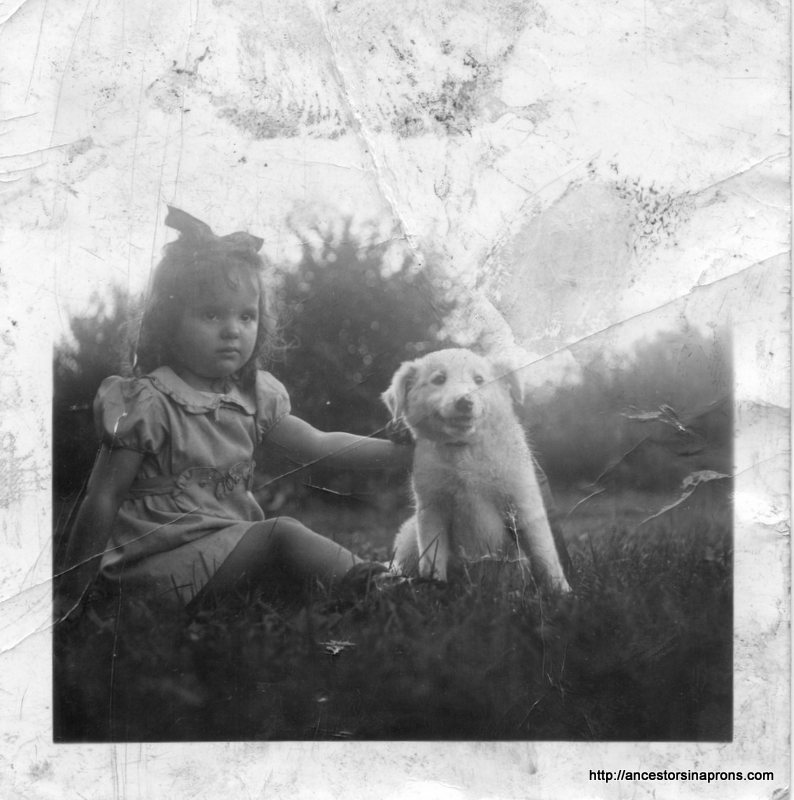 Me as a toddler with Peggy, circa 1941, Killbuck, Ohio

When I was in grade school, sometimes living at Grandma Vera’s house she no longer had dogs, but she did keep lovebirds in a cage. I indignantly thought that was cruelty. Birds should fly free. But they were beautiful and kept her from being lonely with their singing.

Mom and Dad in the 1930s with Banky and Wistful Lady

My mother and father adopted dogs before they were married, in anticipation of starting a family, but they apparently did not have much luck with the dogs. In July 1937, my dad adopted a Cocker Spaniel, complete with AKA papers. She was beautiful, and named Wistful Lady. Oddly, I never heard mother and dad talk about her, even when my husband and I later adopted a similar black Cocker Spaniel. We named the beautiful brunette after Elizabeth Taylor. 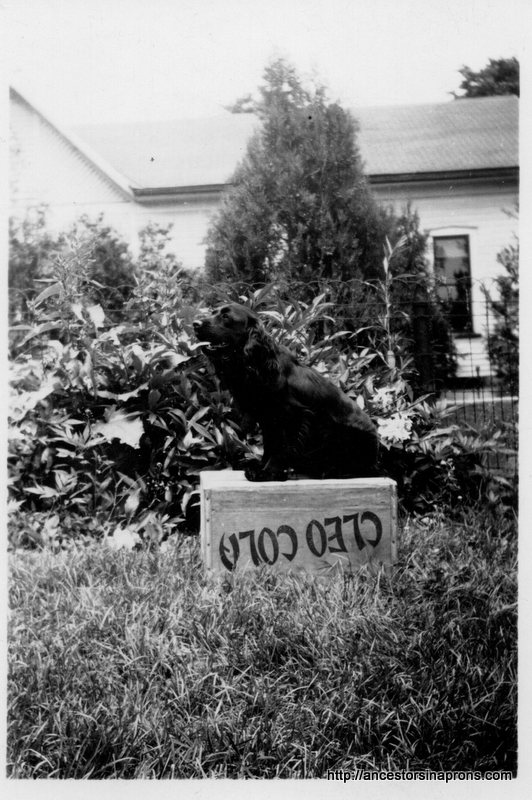 Back in 1938, in the letters exchanged during their courtship two months before they married my mother talks about a dog she had picked out, called Banky. I have no pictures, and no idea what breed it was, but it seems to be a sad story.

March 22, 1938
I went home last evening and I think Bankie is some better but still pretty sick. Mother saturated him with medicine then wrapped a towel around him and held him it seemed to help. Bob Cunningham sat and held him for a long time. He thinks it is a bad case of worms. Everybody has a new theory.

March 31, 1938
I really believe Banky is better, he was much stronger this morning and ate for me and ate some for mother today, but he surely does look sad.

I don’t think Banky is so good. He wants to eat all the time but gets weaker all the time. I am afraid he never will be a very swell dog. I guess I doomed him by picking him out for my dog.

My parents married just as World War II was starting, and took the war effort seriously.  In addition to planting a victory garden, they grew rabbits for food.  I vividly remember the raised rabbit cage that my father built in the garage, even though I could not have been more than three years old.  One time when he opened the cage to add feed, the tiny bunnies escaped and scattered around the neighborhood.  I thought it was great fun.  The raising of rabbits did not last long. I don’t know if my parents were too soft-hearted, or they didn’t want to traumatize me by killing what I saw as pets.

When my parents and brother and sister and I lived in Columbus, we did not have a dog, but I vividly remember the two ducklings that first swam around in a plastic dishpan in the back yard. They grew up, and learned to open the gate from the yard and neighbors discovered them waddling down our driveway and exploring the neighborhood.  Those were probably Easter ducklings.  I think they may have been released in a nearby park to live in the pond there.

Back then, around Easter time, you could buy colored chicks (and sometimes ducks) at the grocery store, hardware store, dime store, or just about anywhere. After we had moved to Killbuck, we had a clutch of those colored chicks.  It was not a good practice to sell chicks to people who didn’t know what to do with them, but my mom and dad had it all figured out.  There was a ramshackle chicken coup on our property, which Dad repaired, and the chicks grew to be great producers of eggs.  For a short while, I was the typical farm girl out collecting eggs in the morning.

One of the great tragedies of my pre-teens was the short time that we had a lovely German Shepherd puppy that I named Rex.  I had spent a lot of time with Rex and taught him quite a few commands.  When my parents decided that Rex was going to be too large for a town lot and would enjoy life more in the country, they contacted a farmer to come pick him up.  I sat in an upstairs window and commanded Rex, who was hiding under the porch to STAY. And no matter what they used to try to lure him out, he stayed.  Finally my dad came upstairs and marched me into my back bedroom and commanded me to stay quiet. Which I did–except for the tears.

Just as Ken and I followed in the Kaser footsteps by adopting a Cocker Spaniel, we later had two German Shepherds, Mack and Suki for characters in Three Penny Opera. I am amazed to learn we have no photographs of these two wonderful family members who lived in our new Scottsdale house until they both became too ill to continue.

Kitchen the Cat and others

Soon after , Rex was wrenched away, The Kaser family adopted a calico cat that I named Kitchen, because we had just redecorated the kitchen in the colors she sported–yellow, black, brown and white.  Kitchen soon had kittens, a varied lot of four, whom I named Sugar, Spice, Salt and Pepper. (Suppose this was foretelling my early interest in cooking?) 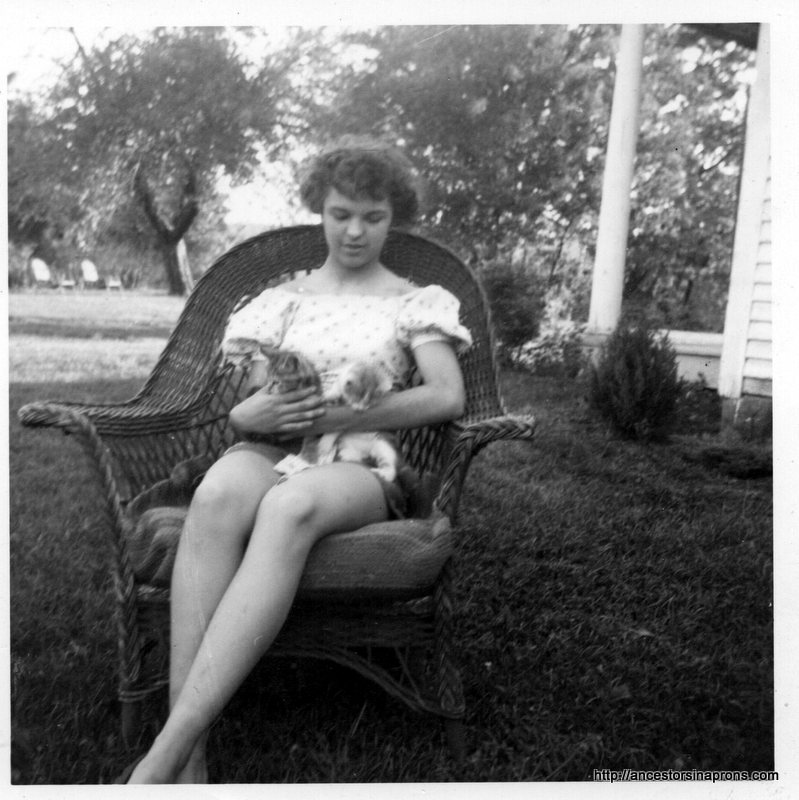 Me in 1952 with some of Kitchen’s kittens at our Killbuck house.

Later, when the Kasers moved to Hilliard Ohio and I was in college, cats started adopting mother and father, and there were always cats around from then on.  When my father went out to start his car on a cold winter morning he always had to check under the hood to see if there were any cats keeping warm.

So Bogie–those are the stories of some early pets in my family including those I grew up with. Now, if you want to know about those who joined our family after Ken and I were married, read on.

——————
A fellow genealogy blogger decided to join me in this effort with her SECOND post on pets in her family. You can see her furry family members on her blog, Cow Hampshire