This week I had a perfect example of why it is dangerous to assume that my genealogical research is complete.  All you have to do is copy it to yours, and you’re set.  Wrong! I’ll say it again: Genealogical Research is NEVER Done.

In this case, if you were relying on me to provide you with the complete story about Jedidiah Brink, you would have been led astray.

When I told you the story of my great-grand uncle, Jedidiah, brother of my great-grandmother Mary Brink Anderson, I included a list of the children he had with his first wife, Susan Fortune.

This week I got an e-mail from helpful Susan Brink, whose husband is descended from Jedidiah. Susan sent me links to information about a Jennie Brink.  Susan had found many listings on Family Search.org about Jennie Brink.  Many of them were obviously some other Jennie, since they were women who were married to a Brink instead of having the birth name Brink.  Others were born far from a date that could reasonably have been a child of Jedidiah and Susan.

But the links included this marriage license. 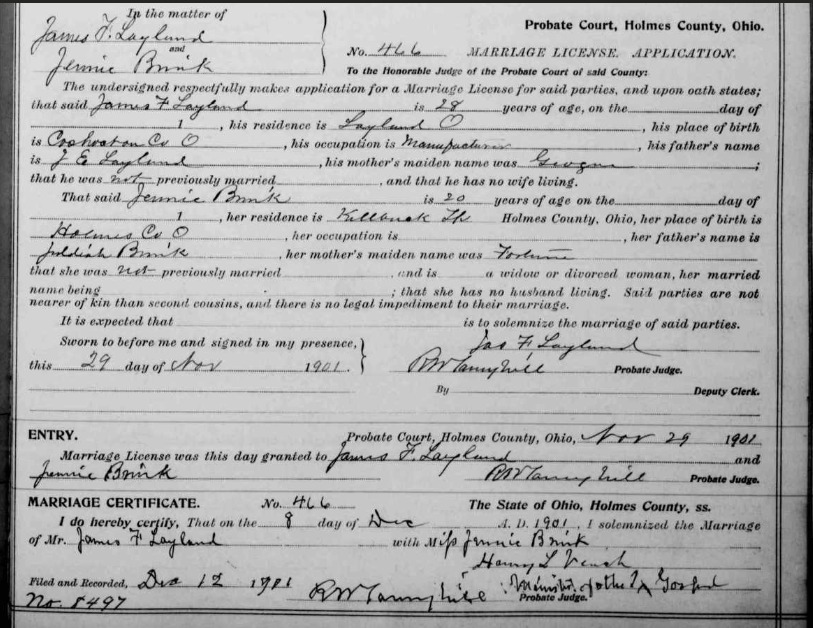 So I took this bit of information and went looking for more information on Jennie at Ancestry.com.  It turns out that she was born in June 1880, the same month that the census was taken in Killbuck Township, Holmes County, Ohio.  The census was mid month, so Jennie apparently was born AFTER the census and so she doesn’t appear.

There are no 1890 census records available–almost all were lost in a fire–including this part of Ohio.

In the 1990 census, Jennie Brink reappears (HURRAH!) in Killbuck Township, Holmes County, Ohio. She was not living with her father or we would have spotted her earlier.  Instead, she was living as a servant with a Clow family.  This makes sense, since Jennie’s mother died in 1899, and there was another sister in the family old enough to take care of Jedidiah’s youngest children.

Jennie did not work as a servant for long, as she married in 1901, as we have seen. Her father also remarried quickly, and the other children scattered. (See article on Jedidiah/Jeddiah).

Jennie and James Layland–Unraveling Some Mysteries

By Looking at Their Children

Neither Jennie nor her husband James F. Layland show up in the 1910 census. What happened? Finally, by searching for James Layland, I found that he died in March, 1905. Find a Grave has his gravesite, but no wife, and no link to Jennie Brink Layland.

I  spotted the obituary of a daughter of Jennie Brink and James Layland, born in 1902. Ruby was born in 1901 according to her marriage certificate, but probably actually 1902. Seven-year-old Ruby was living with her grandfather in 1910, according to the 1910 census. When she was married at 16 years of age, a C. T (?) Layland was listed as her guardian, so both her parents had died by 1910.

Then, as I was typing this, I went back to Family Search.org to look again at Jennie and James’ marriage license, and found that according to death records,  they had another child, James R., born December 5, 1905. I was thinking that Jennie would have become pregnant just before her husband died–probably not aware yet that she would have his baby after he was gone. However, Ancestry coughed up a Birth Certificate for James that indicates he was actually born December 5, 1904–months before his father died! Sometimes records are wrong–which is another genealogical research lesson–try to get a 2nd and 3rd source.

At any rate, James had a short life, dying at 19 years old in Akron, Ohio where he worked in manufacturing.

Since I can find no more information in Jennie, I am assuming that she died soon after James R. Layland was born.  I have not found a death record for Jennie, so I cannot pin that down, but I am satisfied with adding her to Jeddidah’s family and leaving the death year blank for now.  After all, she is a 1st cousin twice removed, making her probably tragic story a lower priority than other people on my tree.

But Wait, There’s More–Who is Viola?

In searching for Jenny, I went back to that 1880 census to have another look at Jeddidah and Susan Brink’s Family.  It is one of those record where the writing has faded and is very difficult to read, however, there definitely was a surprise.  Right between Ida V. (8 years old) and Samuel (1).

There’s yet another daughter I did not know about. Viola Brink, age 6 in 1880. This is somewhat more confusing since Ida, her older sister, is Ida Viola.  When I wrote about Mary Brink Anderson, I explained that her middle name Viola, was passed on to my mother as Violia, which mother roundly hated. Jeddidiah used his sister’s middle name for two of his daughters.  I had even less success in finding this Viola in any other records. That makes me suspect that Viola died in childhood.

So I started this week in the “firm knowledge” that Jeddiah/Jedidiah Brink had SIX children, and am ending the week knowing that he had (at least) EIGHT. Are there more that have eluded me?  And what about the mysterious and probably sad life of Jennie Brink? Did her son James R. die in an industrial accident?  And what happened to young Viola, the daughter of Jeddiah? Genealogical Research is NEVER FINISHED!

2 thoughts on “Why Genealogical Research is Never Done”