As my brother and sister and I took out each precious antique, somebody wondered what the oldest heirloom is that we have had passed down to us.  We will never know how old my sister’s hand-carved wooden bowl is (although it looks like it could have been 17th century) or how old my brother’s pieces of pewter might be.

The Antique Chest Full of Heirlooms

But thanks to my great-grandmother, grandmother and mother, we have dates and names on nearly all the items in our 2x great grandmother Mary Bassett Morgan’s chest.  I wrote about Mary and her chest, and you might want to look at the history of its travels.

When my brother and sister visited recently, we opened the chest and saw this treasure trove. 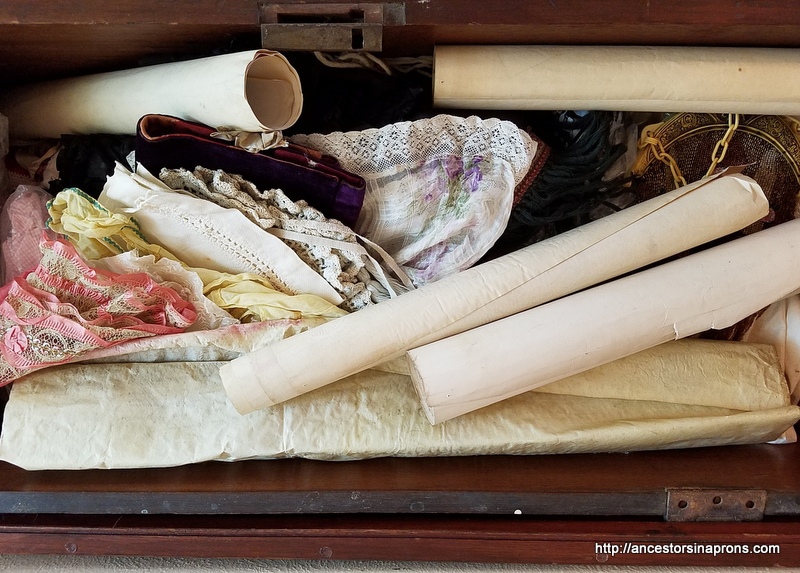 Since the chest itself belonged to 16-year-old Mary Bassett when she traveled to Ohio in 1826/27. It surely had been made some years before, and that makes it one of our older possessions. But there was a much older item to be found.

We saw this stack of cloth items, stitched loosely together with a note in the handwriting of our great-grandmother Harriet Morgan sewn on top.  She identifies a collar made on a loom in 1835 by her mother Mary Bassett Morgan (the original owner of the chest).  That means Mary made this lace collar when she was 25 years old, six years after her first marriage. 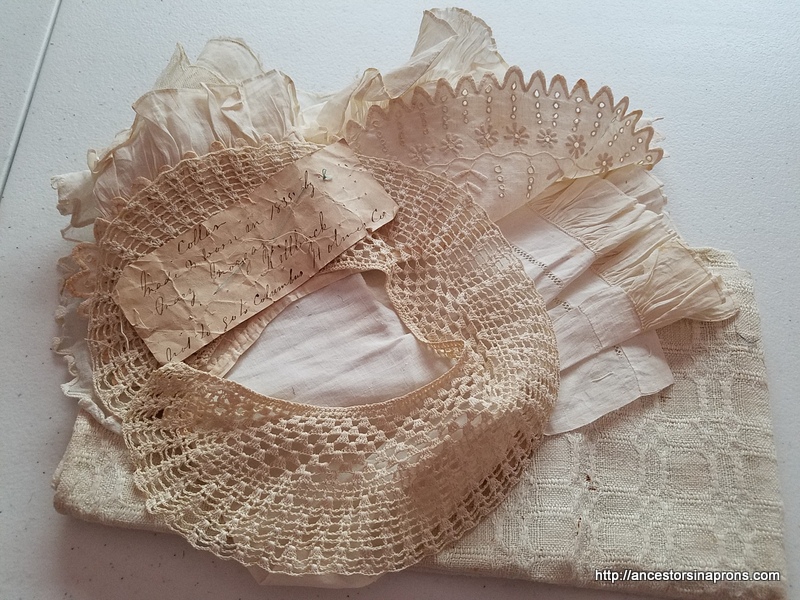 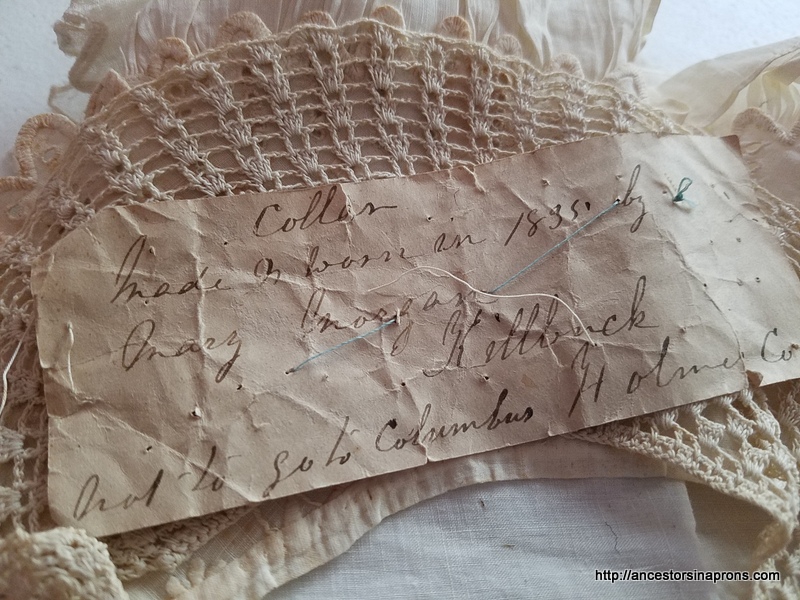 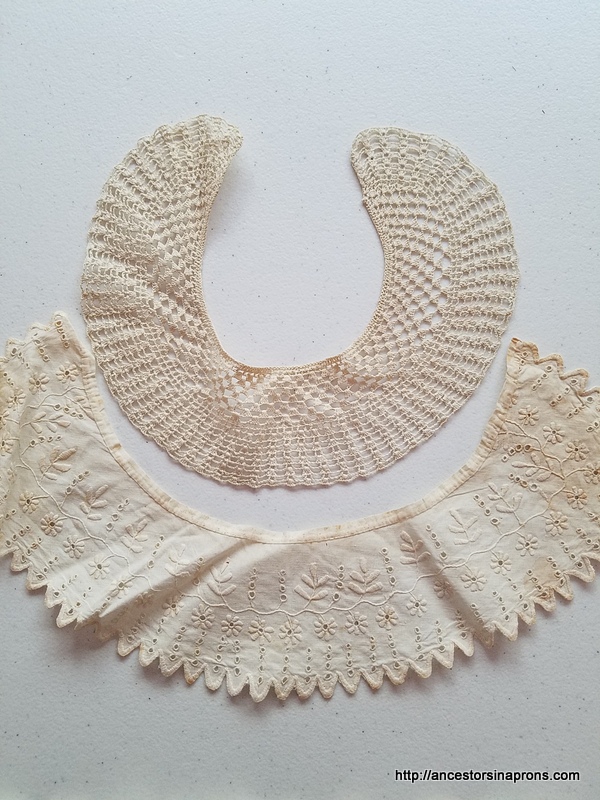 A closer look at the loom-made collar and an embroidered collar saved together.

Not to go to Columbus   Holmes Co.

What Does That Mean? 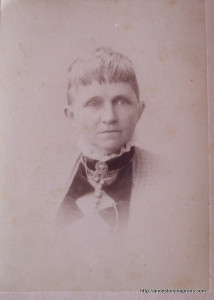 That note takes a little explaining.  Why is this package “not to go to Columbus”?  When and why did Harriet Morgan Stout write this note?

Happily, I already sleuthed out the participation of Harriet and “Doc” William Stout in a huge celebration in Ohio to mark the founding of Marietta, Ohio’s first official city in 1788.  The statewide celebration included expositions in each county of memorabilia by “pioneers.”  Please read that earlier article, and see the newspaper article describing the festivities.

That celebration took place in 1888, so we know that “Hattie” Stout wrote the note that year.  And we now know that the reason it says “not to go to Columbus” is that these precious family antiques were not to go on the road. Mary Bassett Morgan, Hattie’s mother, was still living (she died in 1890) and she probably took these items out of her well-traveled wooden chest and loaned them to Hattie and Doc for the Holmes County exposition with instructions that they be returned safely to her.

However, the collar, now preserved for 181 years, is not the oldest item.  Underneath the collars, in the first picture, you can see a woven piece of cloth. It also has a note written by Hattie Stout attached loosely with thread. 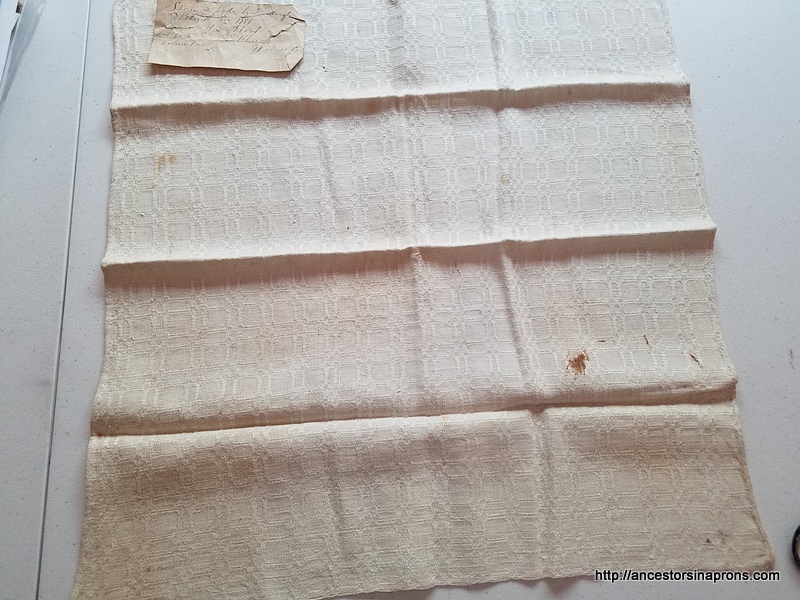 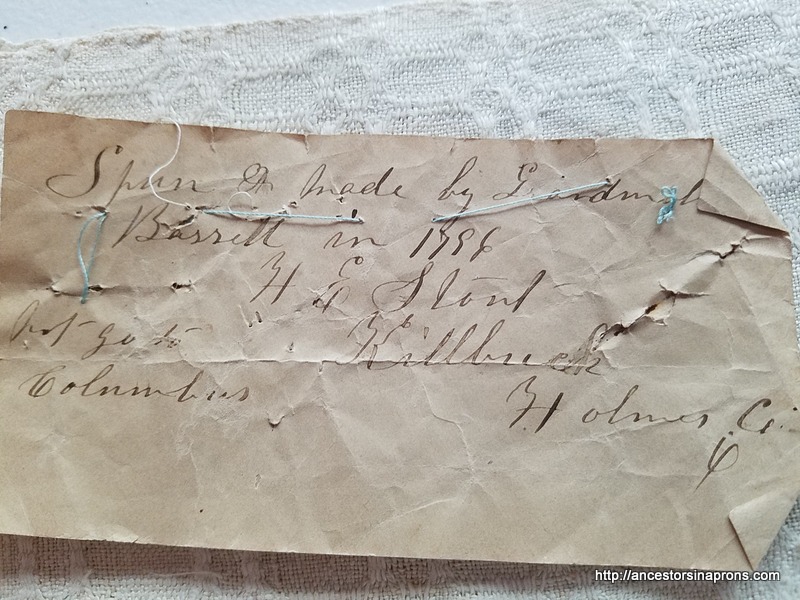 It takes me a moment to absorb that information.

Our Great-grandmother is identifying a piece made by HER grandmother, Elizabeth Stone Bassett, our three times great grandmother.

Elizabeth Stone, in 1796 when she wove this piece was 23 years old,  unmarried, and living in New Hampshire. Eight years later she would marry the last of our long line of William Bassetts. They had five daughters, including my great-grandmother Mary Bassett Morgan. If you click over to the earlier story about Elizabeth Stone that I linked above, you will learn that she died soon after she and her family moved to Ohio.

I know nothing about lace making, and a quick search on Google showed me a wide variety of types of lace and types of looms on which to weave them.  If any readers know more about this, I would love to see what a loom would look like that was used by Elizabeth Stone.

I do know a bit about flax growing and use, as you can see in this item I wrote earlier about my husband’s ancestor Rudolph Manbeck. So Elizabeth may have been using a spinning wheel like this. 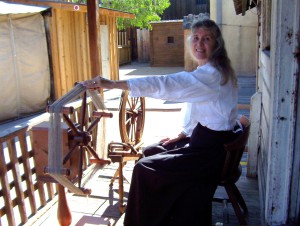 And of course we still don’t know if 1796 is the earliest heirloom that we still have in the family.

Others writings on familly heirlooms

This has been one of my occasional posts on Heirlooms. To see more, type heirlooms into the search box in the right hand column.

Other family history bloggers who write about heirlooms from time to time include:

4 thoughts on “Heirlooms –The Oldest”