Mary refolded the letter home that contained promises and husbandly instruction, and placed it carefully in the wooden chest that she had brought to Ohio as a girl. When Jesse Morgan set out by wagon, stagecoach, riverboat or horseback to travel the western fringes of the United States –Illinois! Iowa!–he wrote detailed letters to his wife back in Killbuck, Holmes County, Ohio.

The earliest letter home had an instruction to his wife that must have caused her great pain. You can read about that story here.  But it also contains the best postscript I have ever read in a letter.

When Jesse Morgan’s first wife died in Killbuck, Ohio, he was left to care for four children.  The two boys, 8 and 10, were sent to live with relatives, but the two girls stayed in Ohio.  Jesse met Mary Bassett, widow of Asahel Platt, perhaps in Keene, Ohio, where she grew up, and where she had  attended the Keene Academy.  Mary’s father William Bassett and her first husband Asahel Platt had both died in 1833, and she moved back to Keene.

Jesse and Mary, widow and widower, were married in 1840 and moved back to Killbuck, Ohio, where their daughter, Harriet (Hattie) was born in August of 1842. According to family legend, Jesse was a teacher, but after he married Mary and they moved back to Killbuck where they both had lived for a time with their first spouses, whatever he was doing for a living, he was also busy helping Mary with the long-drawn-out settlement of the estate of her first husband.

If Jesse was a teacher when he married Mary, he soon wanted to search for his fortune in other places.  He set out to buy and sell horses throughout the Mid West.

Jesse’s journey from Keene Ohio to Astoria Illinois by river and stagecoach road took nearly a month. Today by car, that trip would take a short day. The remoteness of the territory and the fact that most inhabitants had recently arrived, made it fertile territory for people who wished to transport and sell goods and animals. 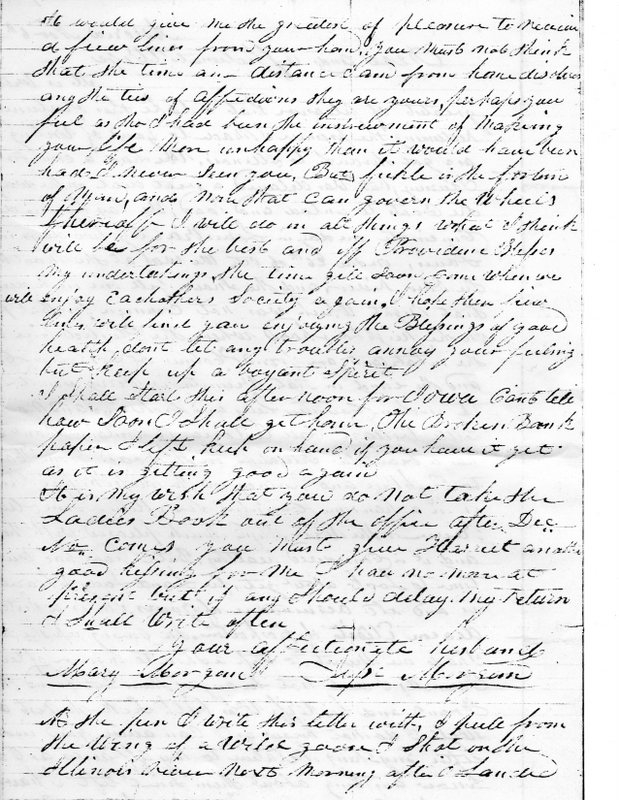 The transcription, with a few notes, is below. As usual, I have added paragraphs and some end of sentence punctuation and capitalization. I left spelling as it was, only marking “sic” on items that might be confusing.

It is with the greatest of pleasure that I take this opportunity of reclaiming the promise I made to you of writing as I got through to Illinois.

We had a comfortable journey, but was delayed a great deal on the way for the boats to unload and load. We lay by one day in Cincinnati one day in Louisville, two days in St. Louis, on the 26th of Oct. We was at the Mouth of the Ohio River and the Snow fell one inch deep on that night which was not common for that place. [He would have traveled by wagon from Holmes County in the northeastern part of the state to Cincinnati which would take several days, then by river boat on the Ohio River to the Mississippi River. He then could take a stage coach on the stagecoach road to the center of Illinois before going on to Iowa.]

In the neighborhood where the Husteds  live 3/4th of the inhabitants are from Holmes or Coshocton Counties and the land in that vicinity is very similar to what it is in them counties, hilly and broken. [I am struck by how many people Jesse knew along the way.  It reminds me how small the population of the Midwestern Territory was compared to the many cities and large population today.]

I am now in a little village call Astoria. It contains about 30 houses has a beautiful situation on the Stage road from Havana to Rushville and Quincy on the Mississippi River. is in a hansom(sic) country six miles from Illinois River In the West. [The little village of Astoria is still a little village, with a population of around 1000 people.]

I am much pleased with the place and it is considered healthy. But I have had too little time to look about yet.

The Landlady whare(sic) I am is an old acquaintance of yours. She is a sister of Deacon Elliott of Coshocton. In coming up the River, I had one minute to step ashore to inquire after the Farwells. I did not see any of them but found that Frank and his wife were both sick. The rest are well.  [I located a Francis Farwell family not far from Mary in Keene in the 1840 census.]

I do not know as I can avise (sic) you in this letter anything relative to my affairs as I do not know anything. Since I left I have now[no] doubt that you will try to do for the best. I hope you have written to me at Burlington that I may hear from you. [Iowa—on the western bank of the Mississippi River]

It would give me the greatest of pleasure to receive a few lines from your hand. You must not think the time and distance I am from home disolves(sic) any the ties of affection. They are yours. Perhaps you feel at tho I have been the instrument of making your life more unhappy than it would have been had I never seen you. But fickle is the fortune of man and none that can govern the wheels thereof. I will do in all things what I think will be for the best and if Providence helps my undertakings the time will soon come when we will enjoy each other’s society again. I hope these few lines will find you enjoying the blessings of good health. Don’t let any trouble annoy your feelings but keep up a buoyant spirit. [This paragraph is particularly ironic, given the fact that it turns out that Mary’s life probably would have been happier had Jesse never met her. It also shows that he has a gambler’s spirit and an optimistic attitude that everything is gong to be better tomorrow. This attitude turns out to be a disaster for him and for her.]

I shall start this afternoon for Iowa. Can’t tell how soon I shall get home. The broken bank paper I left keep on hand if you have it yet because it is getting good again. [In the last post, about Jesse in Chautauqua County, I talked about the serious recession that affected the country in the 1830s. His mention of bank paper getting good again probably refers to the bank specie that became worthless when President Jackson degreed that the federal government would only accept gold and silver.]

It is my wish that you not take the Ladies Book out of the office after Dec no. comes. [See the details on this order from Jesse here.] You must give Harriet another good kissing for me. [My great-grandmother would have been 15 months old as he wrote this letter.] I have no more at present but if any should delay my return, I shall write often.

M. The pen I write this with, I pull from the wing of a wild goose I shot on the Illinois River next morning after I landed.

[While this letter home is packed with interesting details, I still get chills when I read the postscript.  How wonderfully it sheds light on the life that he was living. We know, for instance, that he traveled with a gun.  We know that wild geese flew along the Illinois River in the fall. And we know that people were still write a letter home with a feather. It did a pretty good job for a pen, didn’t it?]

My great-great grandfather, Jesse Morgan, was 38 years old when he wrote this letter home to Mary Bassett Morgan, his second wife. If Mary was looking for some safety and security in marriage, as I supposed when she married Asahel Platt at the age of 19, she was disappointed.  And it seems that she was destined to be disappointed again with the get-rich-quick yearnings of her wandering second husband, Jesse Morgan.