This simple recipe for a traditional Welsh food, Welsh Skillet Cakes produces a nice little breakfast cake, or a snack for tea time.  One site describes them as half way between biscuit and pancake. It is also closely related to the scone. 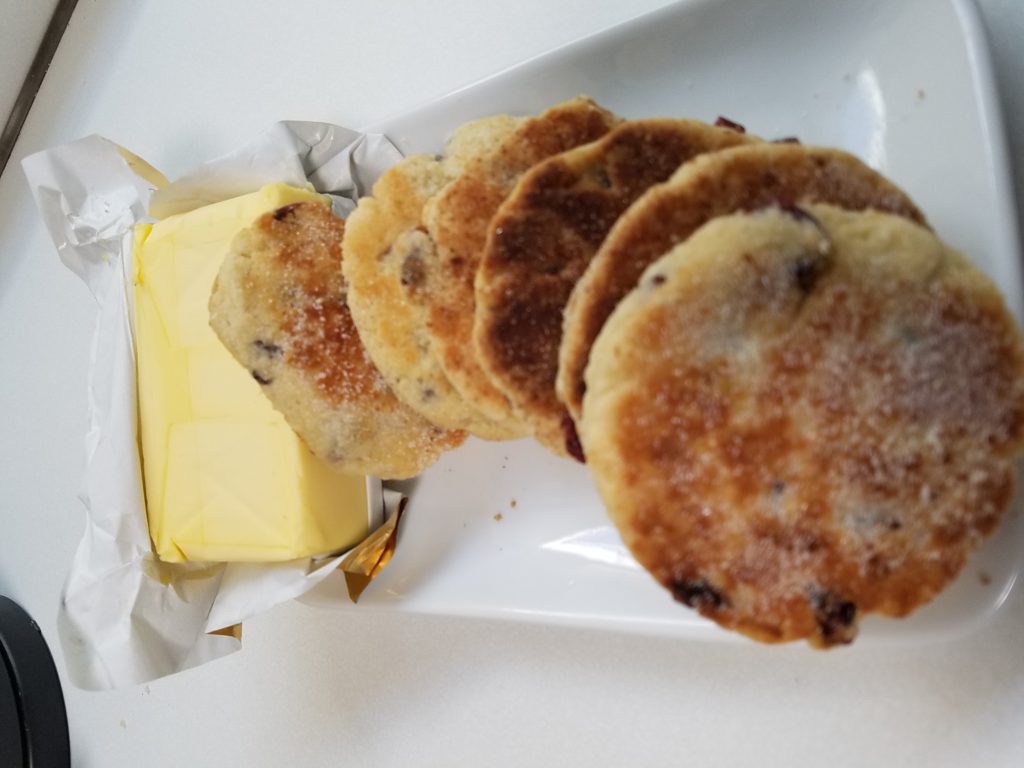 I used the official Wales website for the Welsh skillet cakes that I made, and that is the recipe that I am going to give you. (Unfortunately, they have removed the recipe from their site, but you can find it other places if you Google.)

This recipe calls for measuring by weight, so if you don’t have a scale, you may want to take a look at this Americanized recipe for Welsh skillet cakes, which I have not tried. I compared the two, and besides the fact that the All Recipes recipe makes about 4 times the quantity, it leaves out the little bit of spice in the Welsh recipe I used.  It uses more baking powder and more shortening. (I’m sure you could go with all butter instead of half lard, although the lard undoubtedly contributes a flakiness.)

As I point out in the notes, I did not use any milk at all, so I would suggest Judging by the feel of the dough, rather than just automatically adding milk in a specific amount.

Although the recipe I used did not suggest resting the dough in the refrigerator before rolling, that probably would make the Welsh skillet cakes easier to handle, so next time I will take the extra time to to that.

Breakfast or tea time–eaten cold, or warm from the stove, or rewarmed in the toaster–these easy-to-make treats will become a regular in our house. A tip of the hat to my Welsh ancestors in aprons as I make this traditional Welsh food. 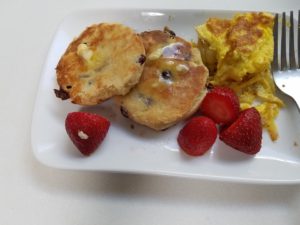 Welsh cakes are a cross between a biscuit and a pancake. Similar to a scone, they are baked on a griddle or iron skillet and delicious for breakfast or for afternoon tea.

Welsh Cakes are quite adaptable. Although the traditional way of making them is with currants, I used dried cranberries. The Wales.com website suggests "as an alternative you can use mixed dried fruit or tropical fruit. Some grated lemon or orange rind is also good. An unusual but delicious addition is 1 teaspoon of lavender flowers with some citrus zest. Add a little orange juice, zest and icing sugar to some soft butter to serve with the Welsh cakes."

I served the Welsh cakes for breakfast, but if you were going to serve them for tea, you could certainly use any of the heavenly clotted creams or curds that you can buy or make.

I indulged by buying Irish butter to spread on my Welsh cakes.

4 thoughts on “Welsh Skillet Cakes: A Tribute to Welsh Ancestors”