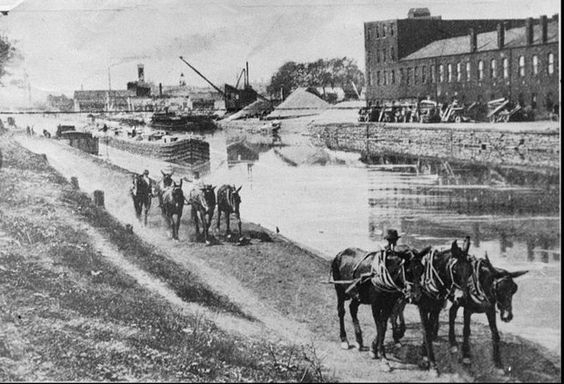 Mule Train on the Erie Canal at Clyde, Ohio

When Jesse Morgan went “on the road” in 1846, the road was a watery one.  He chose canal and lake travel through Ohio and New York and perhaps even up to “Canadi”. These two letters are packed with interesting hints at his life–how he traveled, what it meant to be a horse trader, and even his state of mind.

What or who is my Great-Great Grandfather hiding from? Is there cause for his paranoia? Does his penchant for secrecy explain his later disappearance from home and family?

In his letter to Mary Bassett Morgan in 1843, Jesse Morgan gave details of his travels, but did not specifically say why he was traveling. Although his 1843 letter was sent in November,the timing of the surviving letters, at least in 1846, seems to indicate this was a spring and summer enterprise, perhaps after his school teaching duties were done.

These 1846 letters lack some of the enthusiasm for travel seen in the 1843  letter. Instead, these letters that he wrote to Mary in 1846, in June and July, focus on his business–horse trading. Perhaps the novelty of constant travel has gotten old?

LETTER FROM JESSE IN June 1846

Agreeable to promise, I drop you a few lines hoping that you will not be surprised in finding a letter mailed at Wooster—when I had started for Illinois, such has been my conclusion hoping for the better I am now on my way to York State with horses.

I feel well satisfied in the way that I have lain out my money, taking in to consideration that I had to make some disposition of the mare and could not short of going whear (sic) horses would fetch money I have come to this conclusion, and really believe that I can make a goodly profit in the horses that I bought and turn the mare in to money also. I have a finer pair of horses than I ever seen raised in Killbuck and in this place considered worth eighty dollars I gave $105 for them.

Don’t let any body know where I am. You need not let Mrs. Woods know everything. Keep everything right at home if you can. I will wright or send a paper as soon as I get throw (sic) if I do not sell immediately. Don’t borrow any troubles(?) on my account. I can take care of myself.

So, to clarify what Mary is reading here–she said goodbye to Jesse as he set out to travel south to the Ohio River to go on to Illinois. But in mid June, she gets a letter from Wooster, Ohio–a town that is 25 miles north of Killbuck, where they live. Although that is very close in today’s thinking, it could have been a two day journey for Jesse by horseback.

It seems to me that Jesse is being a little defensive about how well he is handling his money, and his confidence that he can make more profit on his horses by traveling east to New York rather than west to Illinois. I picture him sitting at an Inn or Tavern and shooting the breeze with other traveling salesmen about where business is good.

But why is it necessary for Mary to keep Jesse’s whereabouts secret?  The Woods family appears more than once in the letters, so they must have been friends, so why does he have to warn Mary not to tell her friend everything.  All that, and then he tells her not to worry, he can take care of himself?  Poor Mary is getting mixed messages at best.

LETTER FROM JESSE IN July 1846

As usual I have been delaying writing with the expectation of soon being ready to start for home. Mr. Scott and my self have had good offers and had ought to have taken them, but the market is always a little better further ahead. We have now come to a stand aside determined to sell out but horses are no higher here than at Syracuse and our expenses have been considerable. We have 2 or 3 chances of selling our Match Span [Two horses harnessed together, matching in size and perhaps color for pulling together as a team] but I cannot think we will get more than $225 for them. They will probably be sold by Monday next. Then I shall go back to Canadi [sic] again to sell the Mare. I left her in good pasture and if she improves as I think she will in so long a time and I can make her drive well, I can get a good price for her, if so I shall be able to get home with $75 or $100 clear of all expense besides turning the mare into money. I feel anxious to get home. I want to see you all. When I see a little girl about like Harriet, I think about home more especially. My health is very good and hope these lines will find you enjoying the same blessing.

By July, Jesse is in New York State. Apparently he went from Wooster to Massilon, Ohio, where he got a canal boat on the Ohio & Erie Canal to Lake Erie. Then probably a quick trip across the border to Canada and then back to New York, and to Syracuse before going to Albany. it is tempting to assume that he may have stopped in Chautauqua County to see his father and some other members of his family–perhaps even his sons who had been farmed out to live with family.  However, that is pure speculation, and according to my admittedly sketchy map, would have been too far out of his way.

The Ohio & Erie canal would have taken him to Lake Erie, for further transport by boat. At the peak, Ohio had 1000 miles of canals throughout the state. In 1836 there were 3000 canal boats –one leaving every hour from ports. Ten years later the business was still thriving.

In the map below, you can see how handy the canals were, reaching across the state from the Ohio River to Lake Erie. From Jesse’s home in Killbuck, Ohio, he could reach the Erie canal by a short journey to the South at Coshocton, or to the east. 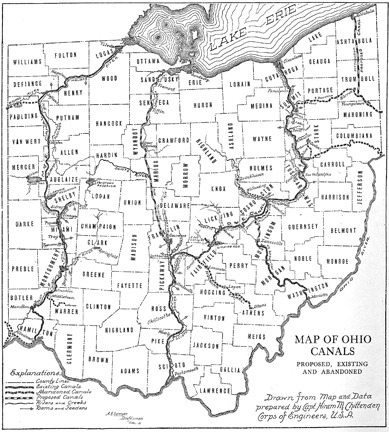 Map of Ohio Canals prior to 1919. Jesse’s home is in Holmes County, and his first letter is from Wooster in Wayne County, directly north of Holmes County.

By the 1840’s steam boats had replaced most of the schooners that previously sailed the Great Lakes.  Mary might have been concerned about his safety, because shipwrecks were common, although more numerous in the fall before the traffic closed entirely for the winter months.

The canal and lake boats were economical. For instance, early fares from Albany to Buffalo was $14.52 including meals and $1 per hundred pounds of goods. After 1840 passage from Buffalo to Chicago on the lake cost $12 for a cabin and $2.50 to $10 for a horse.  As one writer says, “In 1835 as the spirit of land speculation had commenced west the number of passengers crossing the lake was increased….the cost of travel by land was immeasurably higher.”

New York State, likewise had a fully developed canal system that he could have taken advantage of when he arrived back on shore in New York and traveled on to Syracuse and Albany (where he wrote the letter) before his planned trip back to “Canadi”. Presumably he was buying and selling horses along the way.

This letter deepens our understanding of Jesse.  “We ought to have taken them, but the market is always a little better further ahead.” He is the consummate optimist, convinced that the end of the rainbow is just over the hill. This desire to not settle for the bird in the hand draws him farther and farther on his travels.

Note:  I have no idea who Mr. Scott is and have not spotted him in any of the places where Jesse lived, although Jesse himself seemed to evade the census takers in 1840 and 1850.

As in the 1843 letter, when he sent kisses to his baby girl, he mentions the now four-year old  Harriet (Hattie Morgan Stout, my great-grandmother) but oddly does not mention the two daughters from his earlier marriage in any letters. They both would have been living with Mary in Killbuck, Ohio, according to the stories my mother told me, and the 1850 census shows one of the girls still living with Mary.  One married in 1851 and the other not until 1861.

See the post immediately beneath this one for more information about horse trading.

In the next letters (1847) we will learn more about Jesse’s occupation of horse trader plus more about the mysterious desire to be secretive.

The site of the old Erie & Ohio canal that Jesse must have traveled regularly, is now a National Heritage Area.  See the website for more about all the activities available, and detailed maps of the area. We visited Ken’s mother (Agnes Badertscher, now deceased) twenty-some years ago, and took her from her nursing home to visit Roscoe Village, a reconstruction of a pioneer town just outside Coshocton Ohio.  There you can ride a short distance on a canal boat pulled by mules.