Horse trading, land speculation, investments, and teaching. My great-great grandfather was not only a horse trader and some time teacher, he also dealt in financial and land deals. And here we are, reading his mail again.

During the years of 1844 and 1845, if Jesse Morgan was traveling as a horse trader, we have no record of it.  He may have been at home in Killbuck, Ohio teaching and attempting to help settle the will of Mary Bassett Platt Morgan’s first husband, Asahel Platt.

At some point, perhaps a trip for which no letter survives, Jesse acquired land near Crystal Lake in Illinois.  It is also possible that land belonged to his wife, as the widow of Asahel Platt, who had some investments in Illinois according to my mother’s family stories. Asahel may have been doing some land speculation, too.

At any rate, Jesse received a letter from a prominent citizen of the community regarding his property in Crystal Lake.  From the letter, I get the impression that Benjamin Douglas thought that Jesse was going to settle on his land in Crystal Lake rather than engaging in land speculation.

The mention of the Academy may have been because Jesse was interested in education, or it may have been simply to emphasize the prosperity of the growing community.

Yours of the 26th is Recd in due season & I should have ans sooner if I could. I waited until the Register [registrar?] Returned home & until the Road was Located along the north line of your farm which is now done

I sent my son in Chic [Chicago?] with your letter to the Land office and find that your Paiment(sic) is duly Recd so you can Rest assured of your having a Clear title to that(?) Section. The line runs some further west so as to include some of those Beautiful shade Trees so you will have a fine building spot. The last time for breaking pr______ is the month of June so it will be very Rotten in time to sow Wheat the last days of Augt. I find a friend of mine has forty or eighty acres of good timber he will sell you at a fair price near by.

NB. We are going build a large accademy this spring of brick that will cost Several Thousand dollars. 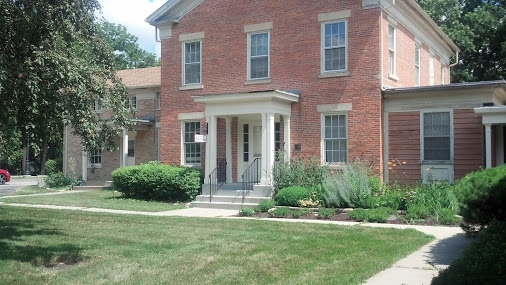 Benjamin Douglas was apparently an important man in Crystal Lake.  In February 1845, a law was enacted by the Illinois legislature to authorize the Crystal Lake Academy and naming Benjamin Douglas, J. T. Pierson and a list of others as Trustees.

The academy ceased operation in the mid 1850s when a public school act passed.( Academies were founded as high schools before public high schools were available.) The house was occupied as a home by the Tarpley family and then passed to ownership of St. Mary Episcopal Church. It is still known as the Tarpley House–one of the oldest buildings in Crystal Lake.

Meanwhile, back in Holmes County, Jesse had applied for a teaching certificate. I can almost hear the family conversations about his long absences and lack of steady salary. What did Mary think about the horse trading and land speculation? Toward the end of the year, Jesse, perhaps vowing to turn over a new leaf, got serious about teaching. However, as we will see in the letters from 1846 and 1847, the urge to wander was not squelched by this piece of paper. 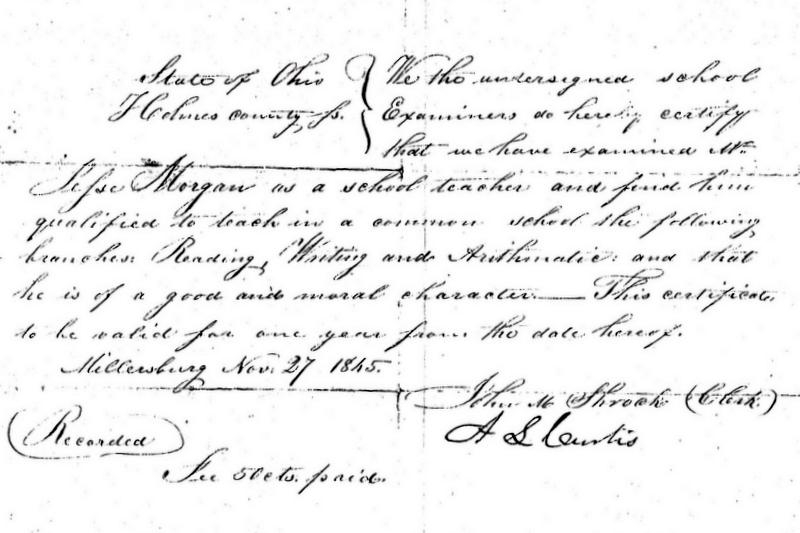 Jesse Morgan’s teacher’s certificate Nov 1845. This is a scan of a photo copy. The original is missing.

Jesse would have gone before the board in Millersburg, the County Seat, who tested his knowledge and paid his 50 cent fee. The testing was done close to home because the people of Ohio long resisted central government, and kept such matters as this at the county level until the late 1840s.

The requirement that the would-be teacher have a knowledge of “Reading, Writing, and Arithmatic” had only surfaced in 1834. Prior to that, according to “A Brief History of Teacher Training in Ohio Beginning in 1910”, an unattributed paper found on the Internet, the primary qualification to teach was the inability to do manual labor.

Early 19th century teachers were certified by a local or county board of examiners. They were required to pass a test proving their competence to teach reading, writing, and arithmetic. Geography, grammar, and orthography (spelling) were later added to required subjects. Examiners also judged the “moral character” of teachers.

We the undersigned school examiners do hereby certify that we have examined Mr. Jesse Morgan as a school teacher and find him qualified to teach in a common school the following branches: Reading, Writing and Arithmatic and that he is of a good and moral character ____________This certificate to be valid for one year from the date hereof.

Jesse, A Man of Good and Moral Character?

As I read this certificate, the part about certifying Jesse as a man of good and moral character strikes me.  This characterization becomes important as we read more about Jesse’s life through reading his mail.

Any readers who can help with the transcription of that one long word starting with a ‘p’ in the letter from Mr. Douglas?