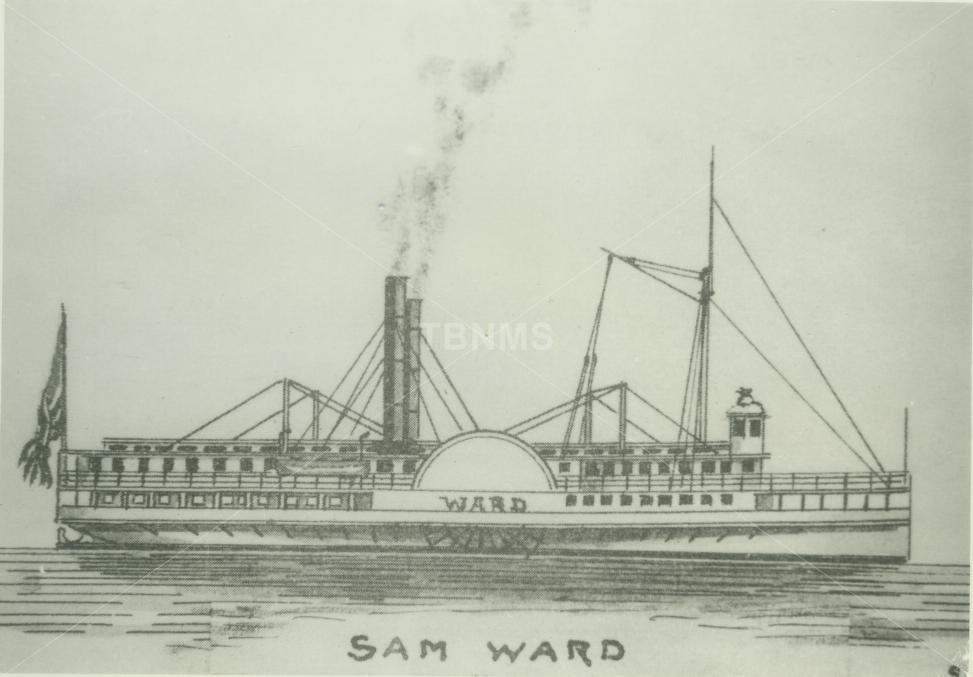 Drawing of the Samuel Ward  steamboat that Jesse sailed on from Buffalo to Detroit on its maiden voyage.

Jesse Morgan, my 2nd great grandfather, continues to travel by steamboat on Lake Erie and the canals. The last four letters from her second husband Jesse Morgan that Mary Bassett Platt Morgan kept  may well have been the last she ever received from him.  I have read and re-read these letters trying to determine if Jesse is on one long trip, stretching from March through August, or if the traveling man was going home in between some of the letters.

At any rate, the one-year teacher certification seems to have been set aside. That certificate was valid through November 1846, and unless Mary did not bother to keep the renewal certificate, that was the end of his official teaching career.  The first letter of 1847, written in April, says he has been on the road for a month–certainly well before the school year is over.

The letter is written on both sides of rather thin paper, so the photocopy shows a lot of bleed through. Additionally, some of the first page got cut off on the right side when it was copied. 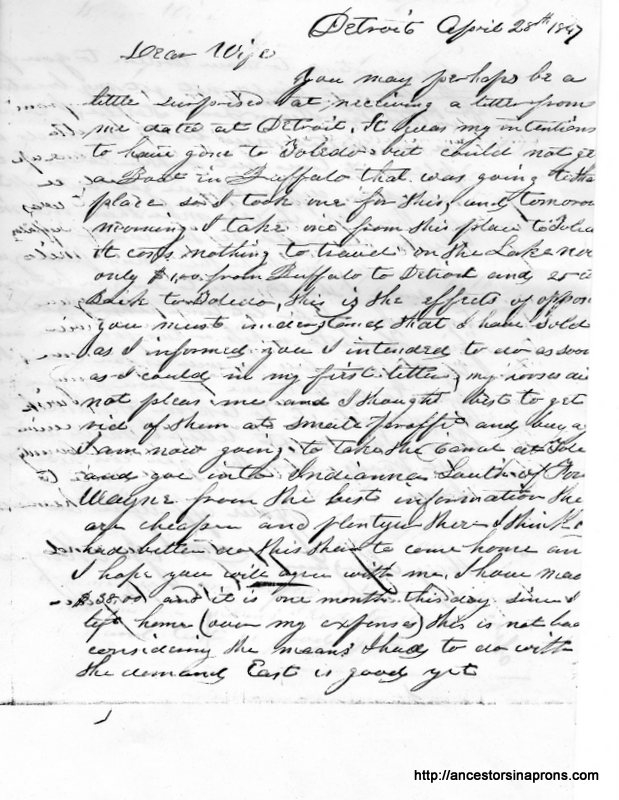 The Travelling Man Goes Both East and West Again

It appears that when Jesse left Ohio at the end of March, he headed East, because he then took a steamboat at Buffalo to Detroit when he could not get one to Toledo, his intended target.  He wanted to get to Toledo so he could take the canal into Indiana, since he has heard that he can buy cheap horses somewhere south of Fort Wayne. Fort Wayne is only about 103 miles south of Toledo Ohio, probably two days journey for him by land.

Mary Is Surprised By a Letter from Detroit

This letter was in an envelope postmarked Detroit April 30 to Mrs. Mary Morgan, Killbuck, Holmes Co., Ohio with a 5 cent red stamp.

You may perhaps be a little surprised at receiving a letter from me dated at Detroit. It was my intentions to have gone to Toledo but could not get a boat in Buffalo that was going to that place so I took one for this, and tomorrow morning I take one from this place to Toledo.

It costs nothing to travel on the Lake [Lake Erie] now. Only $1.00 from Buffalo to Detroit and 25 ct back to Toledo. This is the effects of oppose (?)[opposition—i.e. competition?]

You must understand that I have sold as I informed you I intended to do as soon as I could in my first letter. [That first letter is missing from the collection.] My horses did not please me and I thought best to get rid of them at small proffit [sic] and buy again. I am now going to take the canal at Toledo and go to Indiana. South of Fort Wayne from the best information the horses are cheaper and plentyful (sic) there.

I think I had better do this than to come home and I hope you will agree with me. I have made $38.00 and it is one month this day since I left home (over my expenses). This is not bad considering the means I had to do with. [Meaning he had few or bad horses?] The demand East is good yet.

I did intend to have written to you from Buffalo but could not get my breath after friessing(sic)  on the__________ until the steamboat started. I came up on an entire new boat we had a pleasant time but rather cold. It was with some difficulty we got out of Buffalo for the Ice. It was more than one mile before we could see the water.

I am well and hope this may find you the same. I should like to see you but will try make up for lost time when I get home. Give Harriet a kiss or two for me and try to get along as well as you can. I wish you to write to me as soon as you received this. Direct it to Akron, Summit County, Ohio.

This next letter I shall write to Doc Woods [a year ago, Jesse had cautioned Mary not to “let Mrs. Woods know everything.” . ] and know you can hear whear I am.

Apparently  Jesse hopes to go from Ft. Wayne back into Ohio and then head for Akron, in the northwestern part of the state, and quite close to home. Perhaps he was going back East from Akron before going home, because–horse trading.  It seems he counts on buying cheaper horses in Indiana, and returning eastward to sell them, since he mentions that the market is still good in the East.

If Mary is worrying about Jesse while he is traveling, the information about ice on the lake must have been unsettling.  Conditions on the Great Lakes are so dangerous to the steamboat in the winter that all shipping closes down.  Jesse is traveling in March and April, and reports there is still ice covering the lake a mile out from shore. Shipwrecks were frequent, and mostly weather related.

I particularly treasure the details he mentions, like the ice on the lake and how cold the trip was. Because he says he was on a brand new ship, we can trace the name and description of the ship he traveled on to Detroit.The brand new ship could have been the Sam Ward, which launched out of Detroit to Buffalo in 1847 and ran back and forth to Detroit.

All the letters that Mary Bassett Platt Morgan saved have a few things in common. People, in order to get their money’s worth for their postage, strove to fill both sides of a piece of paper, except for space to write an address when the letter was folded.  (Jesse, however, frequently writes one-sided letters) 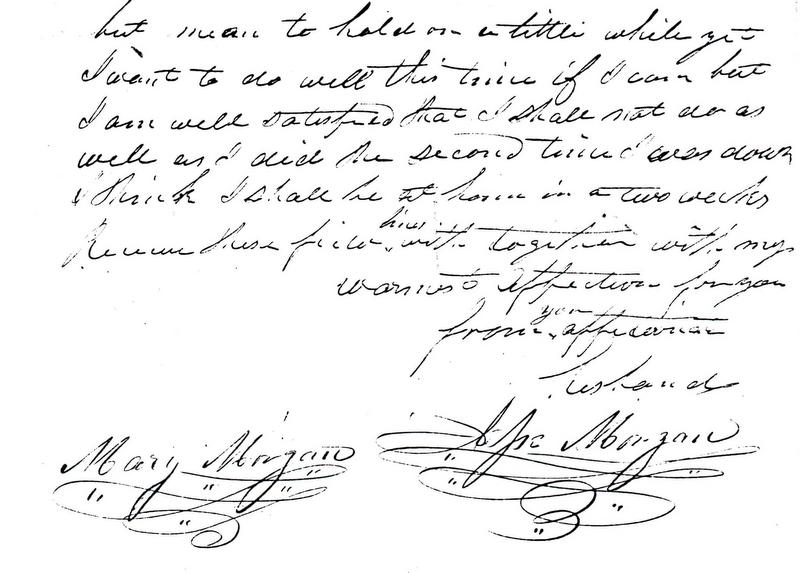 Jesse’s signature on letter August 1847–the last one

These 19th century letters seem obsessed with the health of the sender and the recipient. Sure, we still say, “How are you?” in greeting–but I get the sense that health was a major concern. People in this age did not expect to be healthy and live long lives. Thus ill health was an ever-present concern.

When Jesse writes his  next letter in June 1847, it is a bit rushed because he has had an unsettling experience. It appears that he may have been home between trips.

When I relate his later letters, you will learn who this “Doc” Woods is that is mentioned so frequently, and see what I learned about his business in Illinois.