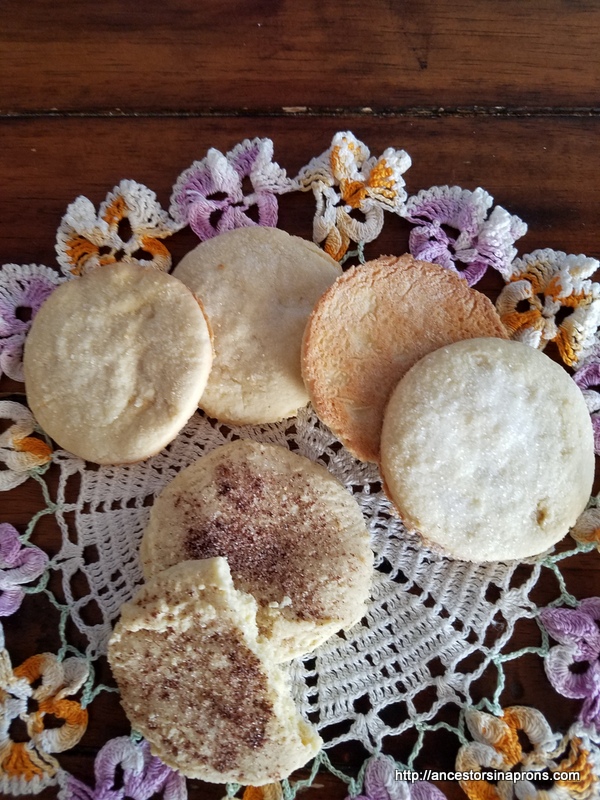 When I offered a plate of these little cookies to a friend and assured her that Mrs. Beeton’s rice cakes are gluten free, she asked in surprise, “Mrs. Beeton had gluten-free recipes?”

Well, yes and no.  The recipe was certainly not labeled as gluten free, so it is almost an accident that it fits with one of the dietary concerns that people have in the 21st century. Do they look like sugar cookies? They also taste pretty much like sugar cookies, but that term was not in use yet, so they were called “cakes.” Or if you’re British and persist in calling cookies biscuits–that’s possible, too. 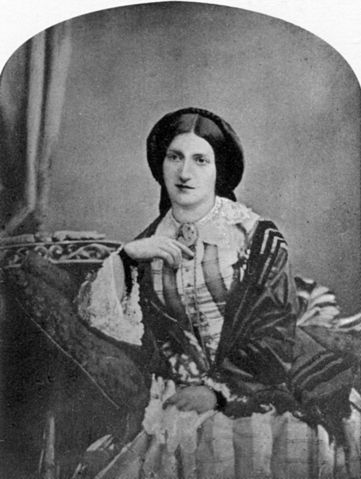 The British wife of a publisher wrote Mrs. Beeton’s Book of Household Management. When the book packed with helpful hints and recipes was first published in 1861, it quickly achieved block-buster success. Isabel Mayton Beeton’s book sold two million copies in its first seven years in print.

Do you remember Hints From Heloise, newspaper column from the 50s and 60s?  Mrs. Beeton’s book combines practical hints worthy of Heloise, or a Family Circle magazine along with detailed recipes and small essays on food worth of today’s staple of the kitchen, Joy of Cooking. Like Heloise, Isabella Beeton’s book was first published as monthly installments in a magazine, and later compiled in a book.

The book was not necesssarily written with you in mind.  The full title is:

The Book of Household Management Comprising information for the Mistress,Housekeeper, Cook, Kitchen-Maid, Butler,Footman, Coachman, Valet, Upper and Under House-Maids, Lady’s-Maid, Maid-of-all-Work,Laundry-Maid, Nurse and Nurse-Maid, Monthly Wet and Sick Nurses, etc. etc.—also Sanitary, Medical, & Legal Memoranda: with a History of the Origin, Properties, and Uses of all Things Connected with Home Life and Comfort.

So while the Mistress of the house was included, it appears that Mrs. Beeton had in mind a book that would help the mistress (Upstairs) in the instruction of her many servants (Downstairs). It is ironic that this class-concious book was embraced by the do-it-yourself ground breaking women of America as well as the British aristocracy.

I hold Isabella Beeton in high regard. A person setting out to write a book this comprehensive today would have a staff of a dozen. And she incorporated so many innovations.  Just think what she might have accomplished, had she not died in 1865, when she was only twenty-eight years old. But her book goes on and on.

Although Mary Morgan would not have had the book in her kitchen in the 40’s and 50’s, it is appropriate because Mrs. Beeton would have been writing about tried and true techniques that had been around for a while. Cooking equipment had not changed much by the 1860s.

Her recipe for Rice Biscuits or Cakes is a typical example of the detail she goes into, even in a very simple recipe.  Each recipe is numbered, and they are arranged by category. This one comes in Chapter 35, Breads, Biscuits and Cakes, under the heading Baking: Recipes. (As opposed to Baking: General.)

Mrs. Beeton pioneered the now-familiar technique of separating the list of ingredients and the method of preparation.  She goes a step further and tells you how long it will take, what it will cost and how much it makes.  Thank goodness Bob’s Red Mill makes rice flour for me, so I don’t need to make my own. But if I did–Mrs. Beeton to the rescue.  She even is aware of her International audience–British and American. What a woman!

Mode.—Beat the butter to a cream, stir in the rice-flour and pounded sugar, and moisten the whole with the eggs, which should be previously well beaten. Roll out the paste, shape it with a round paste-cutter into small cakes, and bake them from 12 to 18 minutes in a very slow oven.

Sufficient to make about 18 cakes. Seasonable at any time.

GROUND RICE, or rice-flour, is used for making several kinds of cakes, also for thickening soups, and for mixing with wheaten flour in producing Manna Kroup. The Americans make rice-bread, and prepare the flour for it in the following manner:—When the rice is thoroughly cleansed, the water is drawn off, and the rice, while damp, bruised in a mortar: it is then dried, and passed through a hair sieve.

Although the cookies melt in your mouth and are satisfyingly sugary, I found them to be quite bland, and am looking forward to trying them again with a little more flavor–like lemon rind, cocoa or even cardamon.

But nothing could be simpler than these little cookies. Just four ingredients, stir, cut, bake, and eat. 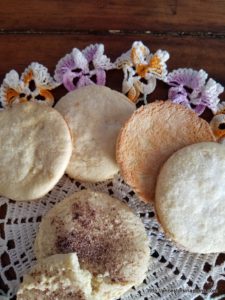 Only four ingredients in this mid-19th century recipe for cookies made with rice flour. Yes, they are gluten free.

If you use unsalted butter in the rice cakes, be sure to add a pinch of salt.

The dough for the rice cakes will be easier to handle if you chill it before patting or rolling. My dough was far too sticky to roll, so I just patted it out.

This dough is very delicate, so I do not recommend using fancy shapes--just round rice cakes.

If you wish, sprinkle sugar or cinnamon sugar on top before the cookies go in the oven.

Since the rice cakes are a little bland,you can experiment with other flavors, such as a little lemon rind, a few drops of peppermint extract or some cocoa powder, but don't tell Mrs. Beeton. That lady did not even use any vanilla for flavoring in these "cakes."

The cookies are pictured on a delicate hand-crocheted doiley that I love.   Unfortunately, I do not know who made this doiley.  Best candidates are two aunts on my father’s side of the family--Irene Bucklew or Blanche Kaser.  Aren’t those pansies adorable? Every time I see this, I have a pang of regret that doileys have fallen out of favor in our no-nonsense age.