A Slice of My Life: The Cleveland Indians 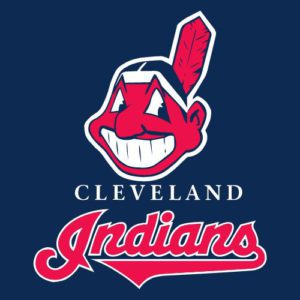 I grew up in Northeastern Ohio in a small town called Killbuck. Back in the day, on a long summer evening you could walk through town and hear play by play of the Cleveland Indians game. No, we did not have Walkmans or I-Pads.

People would leave the screen door open, or maybe have the windows up as they sat on their porch swings, listening to the Cleveland Indians game on the radio. And since EVERYBODY was listening to the game, you could walk all the way through town and never miss a play. Bob Feller was a god.

When the Indians weren’t playing, we’d go up on school house hill and watch the town men and boys playing baseball on a sandlot beside the high school. Since we lived catty-corner across from the lot, we couldn’t resist crossing the road to the ball field. Besides, everybody in town was there.

The elementary school was built on the spot in 1953, and the ball field moved farther behind the school.  I remember the bleachers and I remember that someone was selling snacks. Although I have no idea who sold the snacks, I would wheedle a quarter out of my Uncle Bill Anderson so I could buy a candy bar.

Summer evenings meant singing “Take Me Out to the Ball Game,” joining in cries of “We wuz robbed” and “kill the ump”, breathing in the soft, warm dusty air, and catching up on town gossip. The men retired to their cars to grab a beer in between innings, and played until the air turned cool, the crickets chirped and the stars came out. Baseball didn’t just belong to the Big Leagues, but the Indians mania was strong in the ten-year stretch from 1947 to 1956 all over Ohio.

When the Cleveland Indians made it into the playoffs, we could shuffle through the brightly colored oak and maple and elm leaves as we strolled down the sidewalk, listening to other people’s radios. Even when my family moved too Columbus for a couple of years, the magic wove its spell.

I still remember the pudgy, blond math teacher I had in fifth grade in a Columbus Ohio school and his radio. He had a glassed-in office at the back of his classroom, and when the Indians made the World Series in 1948 (the last time they WON a series), he even let the kids forget about multiplication tables and cluster around his radio. ‘It’s history!’ He explained. Little did he know!

For a ten-year stretch, there, the Cleveland Indians won more games than they lost every year. Then I graduated high school and moved back to Columbus for college and Buckeyes’ football.  My sister reminds me that during that period, my father used to say, “The Indians never win a game after the 4th of July.”

If he could see them now!