Ever hear of Hogmanay? Ever hear of wrapping a cake inside a pastry and calling it Black Bun?

If you answered yes to either of those questions, you are way ahead of me. Despite my Scottish ancestry, I did not know that while we are celebrating New Year’s Eve by singing Auld Lang Syne by the Scot’s favorite poet, Robert Burns, the Scots are celebrating Hogmanay. What’s more, an important ingredient for Hogmanay is a rich dessert called Black Bun.

While you’re celebrating Hogmanay–a tradition that grew out of Viking end-of-winter celebrations–don’t forget about first footing.  Send a dark-haired man outside to enter your house just after midnight bearing gifts of coal, salt, bread and, of course, whiskey.  Maybe he could bring a nice big Black Bun also.

According to Wikipedia, the Black Bun was originally made for Twelfth Night, but has shifted to the Hogmanay celebration.

I couldn’t let an enticing recipe like that go untested.  So here’s the recipe for Black Bun.  It yields a fruit-rich, overall very rich cake–its heaviness set off by the flaky pastry wrapped around the outside. Fortunately, my recipe for Perfect Pastry once again proves its perfection in this recipe.

The richness encouraged me to attack it in small bites.  Here’s a view of a cut end of the Black Bun and you can see the niche where I have cut out TWO day’s portions. 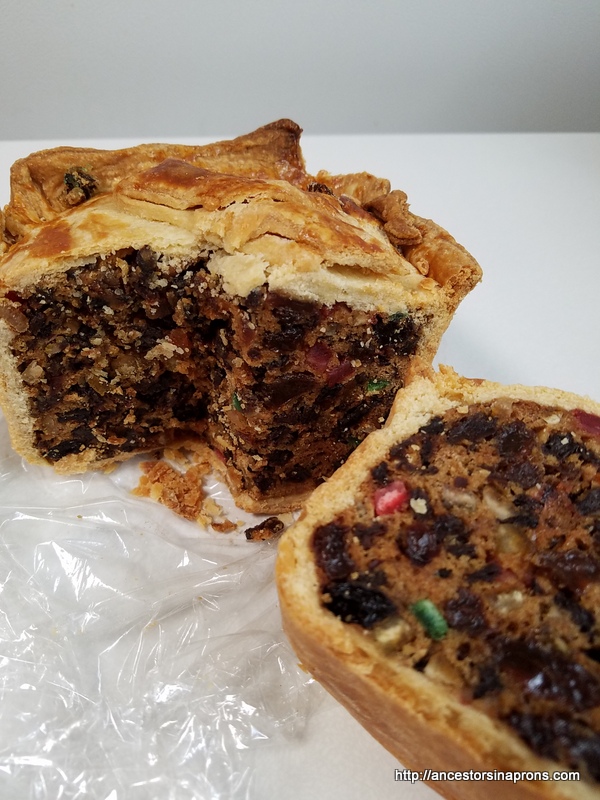 Black Bun with piece cut out.

It wasn’t really difficult to make, once I figured out how to measure my pan and cut the pastry to fit. The original is loaf-shaped. 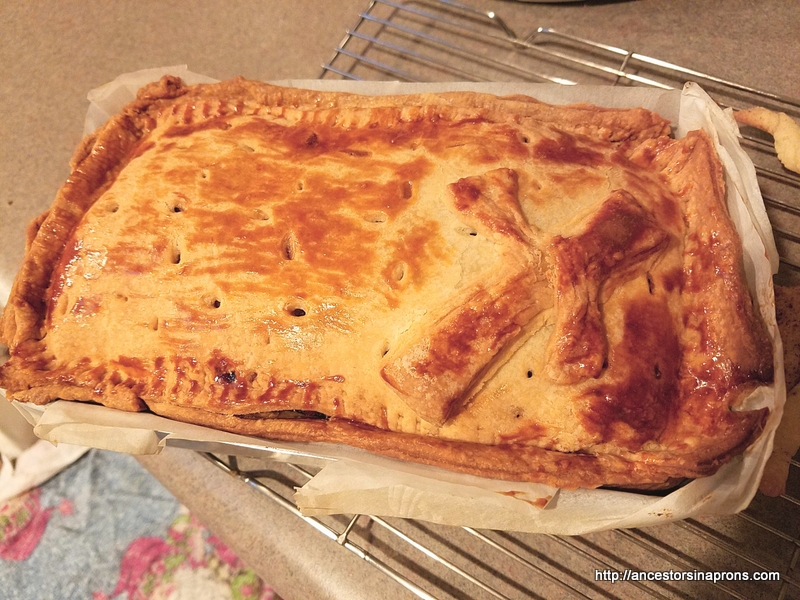 I attempted a bow on top, but I think it turned out looking more like either a cross or a “K”.  I would say it is a K for Kenneth, my husband, however he does not like raisins.  If you have an anti-raisin person in your house, forget trying to get them to eat Black Bun. It is all about raisins and currants.

I adapted this recipe from the BBC web page, a really good source of authentic recipes from Great Britain.   Other recipes include nuts or double up on the spices, so once you’ve tried the basic recipe, you can adjust it to suit your own tastes. 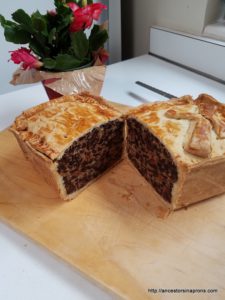 The Scottish celebrate New Year's Eve with a holiday called Hogmanay. They also bake a fruitcake inside a pastry wrapper for the occasion. This is a recipe for the Scottish Black Bun.

The BBC site from which I adapted the recipe for Black Bun used grams and ounces. I add the equivalents in cups, although your most accurate measure is still by weighing ingredients.

I used my Perfect Pastry recipe to make this pastry to wrap the Black Bun and it worked like a charm, although I did not get it sealed perfectly on one side. I used the equivalent of 3 single crust pie pastries. That left me with quite a bit of dough, which I made into pie cookies.

Here is the recipe for British spice for desserts like Black Bun from the BBC site: