Mac and cheese, spaghetti and meatballs, chili mac–the comfort foods of the midwestern America. Pasta has a surprisingly long history in American cooking.

Macaroni swept London in the 1770s as fashionable young men did the Grand Tour of Italy and brought back macaroni dishes. The craze for Italian, art Italian fashion, and Italian food carried across the Atlantic into the colonies as well.  British satirists had a field day with Italy-crazed young men, calling the wearers of foppish fashions “Macaronis”. A drinking song satirized the stupid Yankee Doodle dolts (as they were seen in England). The American soldiers, the British sang, didn’t know the difference between a feather and fashion.

For a detailed explanation of the phrase, “Stuck a feather in his cap and called it macaroni”, see this web site on political satire of the American Revolution period.  Just as Hillary Clinton fans gleefully took the title “Nasty Woman” and Donald Trump fans adopted “Despicables” during the 2016 presidential campaign, the American revolutionaries purloined the English song that mocked them.

Our Love Affair with Pasta Goes Way Back

Meanwhile, American housewives imported macaroni (and other pastas) and found new ways to use them.  Later, Italian immigants opened restaurants where they catered to American tastes and American Italian food strayed from the original. Mrs. Beeton‘s wonderfully thorough household guide, published in 1860, explains the differece between various pastas, the wheat used to make the best pasta, and gives numeous recipes for using pasta–in soup, in macaroni with Parmesan cheese, and in macaroni puddings. According to Paul Freedma in Ten Restaurants that Changed America, macaroni was a mainstay on restaurant menus throughout the 19th century.  Even the classiest New York Society hang-outs offered macaroni and cheese.

Although I have been able to document the absolute origin of Chili Mac, most sources seem to think it came from Cincinnati, where the famous cinnamon-flavored chili is served on spaghetti to this day.  But there is that little nagging problem of “Why is it alled Chili MAC if it is really Chili GHETTI?” The chili part is never in question. Originally, it probably depended on canned Hormel chili, a cheap and quick way to get a filling meal into a family. As you will see in my recipe, I eschew the old familiar canned stuff and strike out on my own. Cincinnati or not, there is no doubt in my mind that Chili Mac is a typical middle western dish, as is Johnny Marzetti. 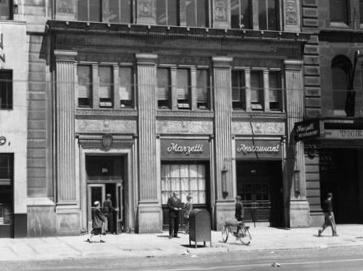 Johnny Marzetti is easier to trace. Marzetti’s restaurant in Columbus Ohio near the Ohio State University campus mixed noodles with canned tomatoes and tomato sauce, ground beef and cheese and baked the mixture. (That link takes you to the original recipe).  Ms. Marzetti the restaurant’s owner, named the dish for her brother Johnny.  She popularized the comfort food in the 1920s, right when my mother was attending Ohio State University. No wonder Johnny Marzetti became a staple on our dinner table.  The nutrituous, make-ahead casserole, also starred on school lunch menus (all that government donated cheese!) and still shows up on Midwestern potluck tables. Every cook may have a different recipe–my sister and I differ on the kind of noodles to use–I prefer flat noodles for Johnny Marzetti and when I use macaroni the dish becomes chili mac.

I suspect that although both variations of noodles-beef-tomatoes may have originated early in the 20th century, they both got a big boost because of the Great Depression.

Chili Mac soothes and fills the empty tummy on a chilly MidWestern winter day. It is inexpensive, easy on the cook and a perfect comfort food. 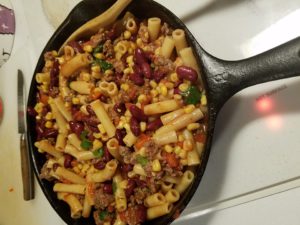 Feel free to adapt and use what you have on hand. This recipe is abundantly flexible.