The love story of Harriet Morgan and newly minted doctor William Stout starts on the bridge just outside Killbuck, Ohio. Before I show you some of the things that my great-grandmother saved from her wedding in 1860, you can click on this link and read about how the couple met.

If you have been following the story of Harriet’s mother and father–Mary and Jesse Morgan–you will understand why Harriet’s mother, Mary, may have been cautious about this young man who showed up at her doorstep with her daughter. At any rate they married. The newly weds stayed in Killbuck, perhaps a requirement by Mary or perhaps because Harriet did not want to leave her mother alone. Doc Stout started practicing medicine at a time when there were already two doctors practicing in the tiny town.

My mother told the romantic story over and over. The fact that mother knew the story so well, indicates to me that great-grandma Harriet (Hattie) Morgan Stout liked to tell the story herself.  Thank goodness for her romantic soul. Without her devotion to preserving famly memories, my family history would lack all this tangible reminders of my ancestors.

We got a peek at great-grandmother Harriet’s wedding dress when I photographed the crazy quilt that she made with the help of her mother-in-law in the early 20th century. 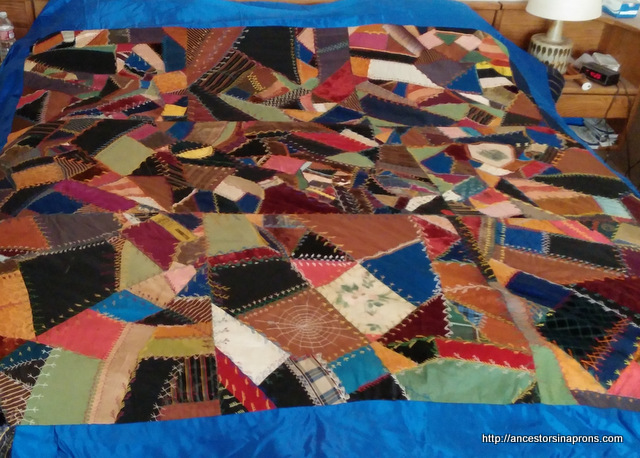 The small pieces of green material were from Harriet’s wedding dress.  The embossed silk material does not show up to the best advantage in this picture. And why green?  After all, when Queen Victoria married in 1840, she wore white, starting a trend that now rules bridal choices.  At any rate, Hattie chose green. Perhaps the material was easily available, or marked down. Most likely she wanted a material that could be reused for something more practical in the future. The material is shiny–slightly duller in the background than the very shiny embossed design, which made it dificult to photograph.  The color is actually a bit deeper than I could persuade my camera to reflect. 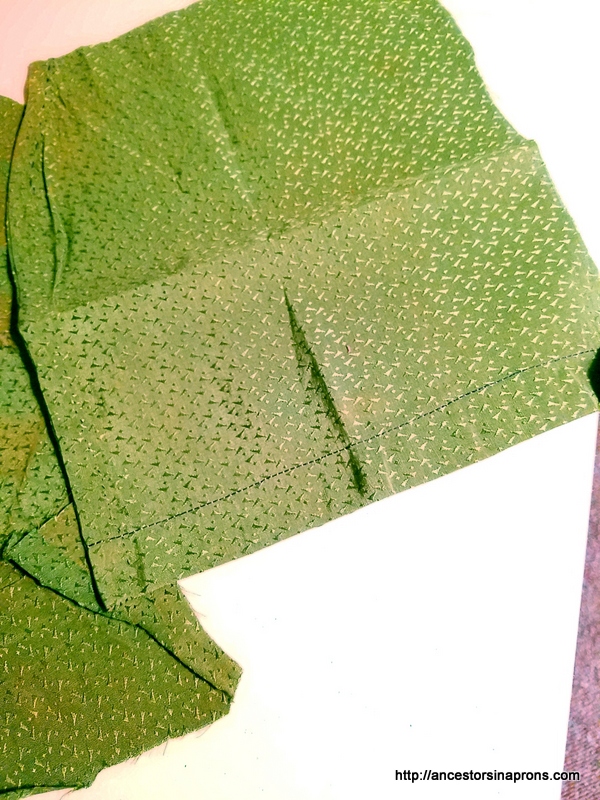 Mother’s note, pinned to the scraps of material, says that the wedding dress had three skirts made of this material.  Harriet’s mother was a seamstress, but nevertheless it would have taken some time to make such a complex dress. Although no wedding picture survives the-is picture from the Metropolitan Museum helps me imagine what Hattie might have looked like in her green wedding dress. 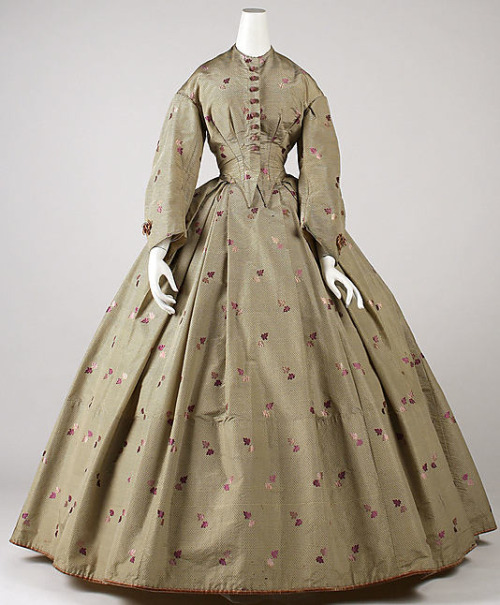 How practical my grandmothers and great-grandmothers were! It would not occur to me to cut up a preciouis dress and make something else out of it–like a quilt.  But Great-Grandma Harriet Stout remade more than the dress. Here is what happened to a vest belonging to “Doc” Stout. (I do not have a record indicating that it is a wedding vest, but doesn’t that seem likely?) I have read that white was the common color for men’s waistcoats/vests in the 1860s, but I wonder if Hattie would have bothered to save a piece of any old vest 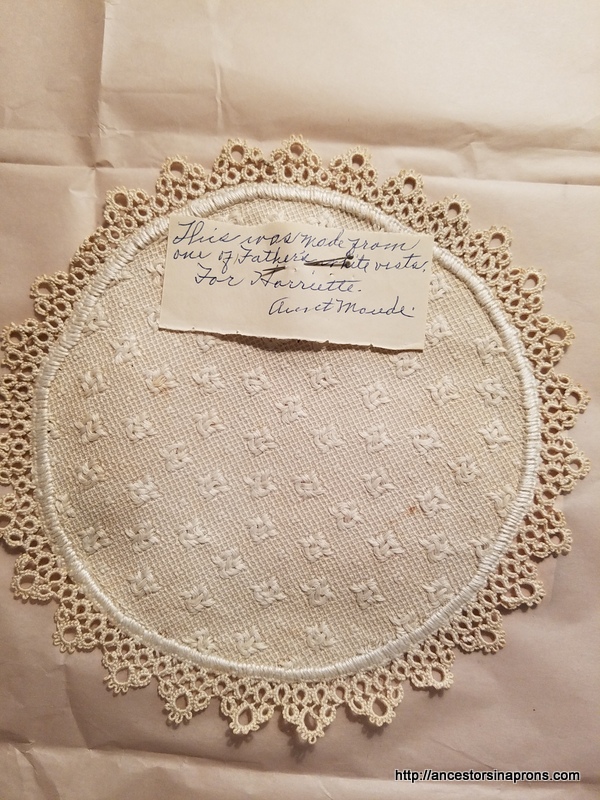 Doc Stout’s vest made into a doily, Maude Bartlett’s note.

The crocheted edge is beautifully executed as is the embroidered edge around the circle to serve as a hem. Someone–I assume it was Harriet–worked very hard on this beautiful little gem.

My Great Aunt Maude Stout Bartlett wrote the attached note identifying the piece. (Thank you Aunt Maude!) She also added “for Harriette.”  For the last ten or fifteen years of her life, this childless woman sorted her family treasures, from furniture to tea cups and put notes on them as to who was to inherit them.  Her determination to control her belongings beyond the grave become a family joke. When my sister and brother were visiting last summer and we went through Mary Morgan Stout’s chest of treasures, my sister Paula found a beaded bag with a note I had stuck inside “For Paula when I am gone.” As I get older, I am no longer laughing at Aunt Maude’s attempt to be sure that precious memories would go to someone who would appreciate them.

Back to Hattie and Wiliam’s wedding–In Victorian times, no lady would go out of the house without gloves or without a pretty handkerchief. In fact, this tradition continued for the next one hundred years. As a newlywed in the 1960s, I would wear gloves even if I was making a trip to the department store. Paper tissues had not yet pushed aside handkerchiefs in the 1960s, either. But I never have seen such a gorgeous handkerchief as this one from the 1860 wedding. The wide border of delicate lace is absolutely stunning. 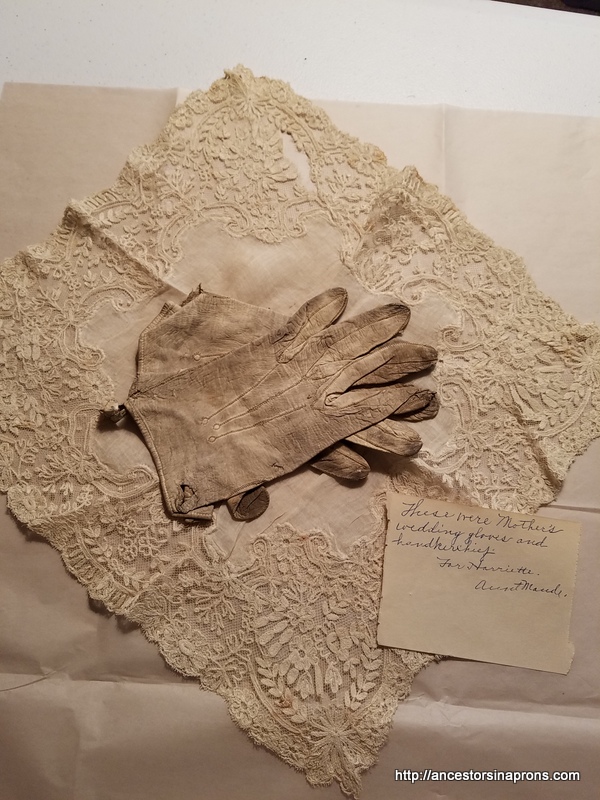 I tried to put on these soft leather gloves that belonged to Harriet Morgan Stout, but they are way too small. It surprised me because I have pretty small hands, and pictures we have of “Hattie” in later years show a fairly “substantial” lady. She must have been quite petite when she married.

Not to be outdone, William Stout also carried a fancy handkerchief (known as a pocket square). When I say fancy, I am implying that it is decorative rather than practical!  Silk,  in taupe, with a gold embossed design. 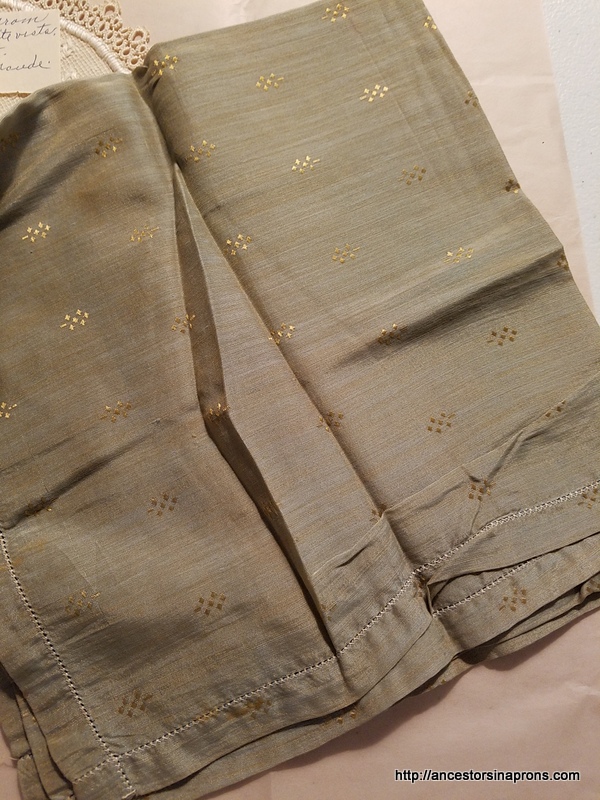 I wish I had a photograph that could be identified as a wedding picure of William and Hattie, however we’ll have to settle for these pieces of the wedding clothing–not a bad substitute, in my opinion.

All of these famly heirlooms came from Mary Bassett’s wooden chest.

Jeanne Bryan Insalaco, Everyone Has a Story to Tell,  started a Family Heirloom challenge in November 2015 asking fellow bloggers to join me in telling the stories of their family heirlooms. Here are some of the bloggers who who also blog about heirlooms.