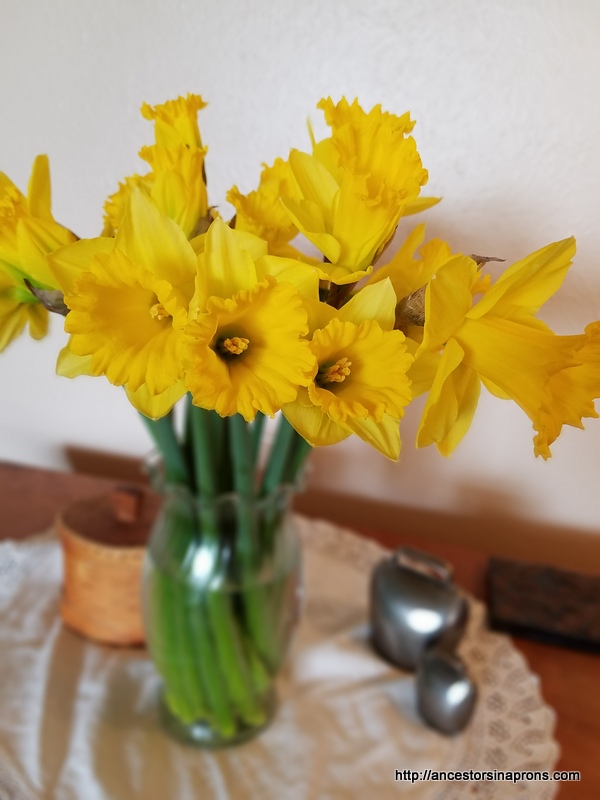 On March 1st, I’ll be celebrating St. David’s Day.  “Who/What?”  Well, think another Celtic country celebrates its national day–David instead of Patrick, Wales instead of Ireland and leeks and daffodils instead of Shamrocks. And some home-made Welsh Cawl. 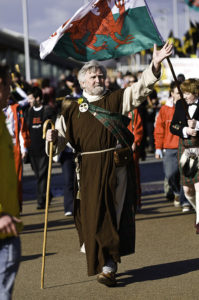 You can learn more about St. David and his day from this article in The Telegraph.

Of course, my special occasion planning goes straight to “What do we eat?”

The answer to that question for St. David’s Day seems to vary, but always includes some Welsh Skillet Cakes and the Welsh soul food, Welsh Cawl.  Pronounce it like “owl”. Make it with winter vegetables. Sup it from a bowl with some crusty bread.

Like beef vegetable soup or stew, this dish is quite flexible, so feel free to toss in what you have on hand. But the basics that make it uniquely Welsh Cawl include lamb, leeks and potatoes. If you read that article on St. David, you might have picked up that the saint recommended the Welsh wear leeks in their caps when they went into battle. Smelly, what?  However, a more practical reason for leeks in the soup is that they  are widely available in late winter/early spring. 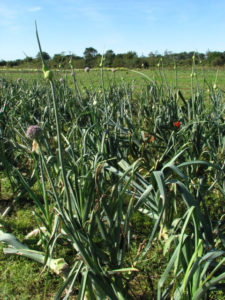 The other vegetables that might be included in your Welsh Cawl could be carrots, rutabagas, parsnips and even some greens, like spinach or kale (which I’ll toss in to mine when I reheat it.)

Although this is a simple recipe, it takes a while to make it, and everyone recommends leaving it in the fridge for a day before you eat it. So plan ahead. The flavors have a chance to meld, and to me the most important reason for the day’s delay is that the fat accumulates on top and you can skim it off.

Peasant Food Isn’t The Bargain It Used To Be 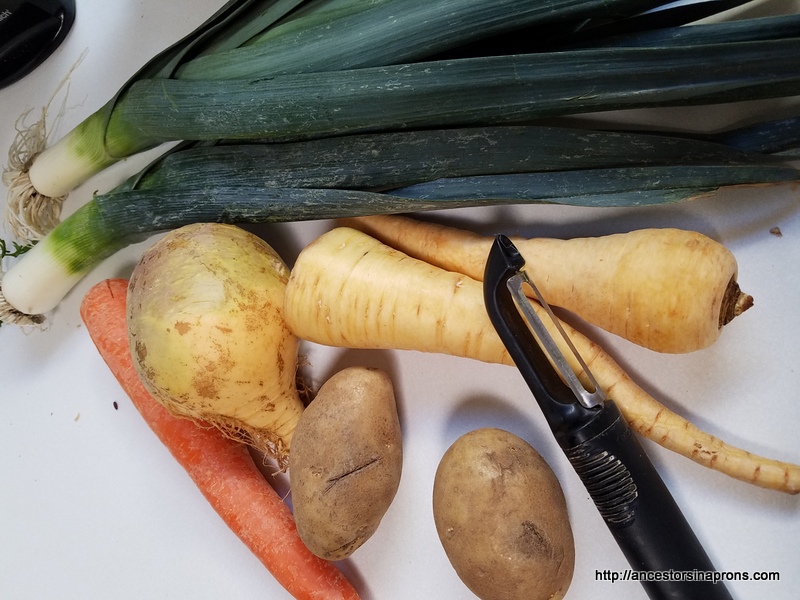 Our peasant ancestors made this soup for its taste–but also for its economy.  In Wales on their small farms, they always had lamb available at this time of year, and they ate every cheap cut of meat from it. Generally they used neck for the Cawl. While lamb may still be abundant in parts of Europe (and New Zealand and Australia),  lamb in 21st Century America has graduated to a luxury item.

I could not buy lamb neck, even at a specialty butcher shop, and I wanted a piece of meat a bit meatier than the second choice, lamb shanks. So I went with another cut I had seen mentioned in online recipes–lamb shoulder. It was expensive.  $24.45 for less than three pounds. And a good deal of that was gristle and fat which got trimmed away after the initial cooking.

Of course it was not Welsh lamb–it came from Australia, which is fine, because I suspect that a good number of the sheep farmers in Australia originally emigrated from Wales.

Then there were the vegetables. Potatoes and carrots are standard, but not as many people like parsnips and rutabagas as I do.  Plus they don’t grow in the winter here in the Southwest.  So I paid $1.50 for one rutabaga and $1.99 for a pair of parsnips.

But the real shock came with the leeks at 2.49 per pound, I paid 1.77, and of course, threw most of them away, because I used only the white part.

On the other hand, the combination of lamb shoulder and veggies made over a gallon of soup, which will make at least 12 servings. 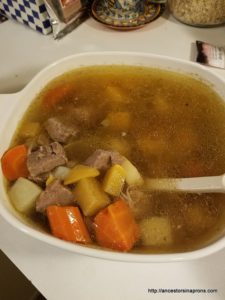 On St. David's Day in Wales, the traditional comfort food is Welsh cawl--a hearty soup of lamb and winter vegetables.

Lamb neck is suggested as the favored cut for this recipe, in which case you would need to pick the meat off the bones after the initial cooking of the meat, and the cooking time would be shorter.

The same would be the case with lamb shanks, another possible cut of meat.

As the meat simmers, you may need to skim off fat. Add water if needed, to keep the meat covered at all times during cooking.