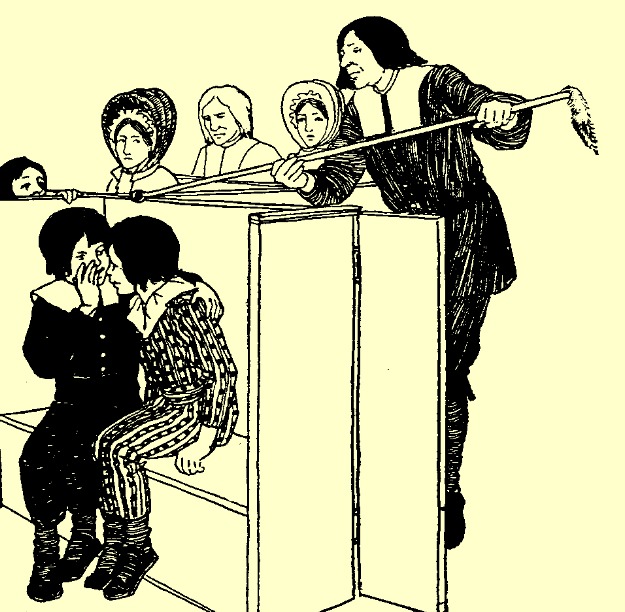 Tithingman illustration from Stories of the Pilgrims by Margaret B. Pumphrey

John Bent Jr. was the fifth child of John Bent, Sr. and his wife Martha. The family arrived in American in 1638, on the ship Confidence, sailing from Southampton.  Since John was only two years old, he surely didn’t remember anything about his native land, but we know that he was baptized in Penton Grafton, Hampshire County, England on January 24, 1636.

John would have been 7 years old when my 7x great-grandmother, Martha Bent was born in their new home in Sudbury, Massachusetts. In Sudbury he saw  his 23-yr-old brother Robert die in 1648.

From Sudbury to Framingham with 1st Wife Hannah Stone

He grew up in that small Puritan village and met and married Hannah Stone* of Cambridge on  July 1, 1658.  They had a daughter, named Hannah** for her mother, in 1661 and then like so many young men, John apparently decided he need to move away from Sudbury to take advantage of more land available nearby.

In 1662 John Bent Jr. bought land in what is now Framingham “near the Fordway over the Cochituate Brook on the west side of the  old Connecticut Path. ” (The link here takes you to an excellent Wikipedia article on the history of the path). There he built one of the first houses in Framingham.  The Bent Family History describes the “old Connecticut Path” in a footnote:

“This old Indian trail was the only way eastern settlers [meaning those migrating east from the first settlements around Plymouth] had to reach the towns on the Connecticut River.  It ran west along the north bank of the Charles River, then to the northern end of Cochituate Pond and Southwest through South Framingham.”

Roadways were few and far between, and John Bent’s location on the side of the old Connecticut Path would be a very important location. Cochituate Pond is now Cochituate Lake. The old Connecticut Path still exists in portions of Rt. 9 and of Rt. 126 through Wayland where it splits with the Bay Path, later called The Boston Post Road. The Boston Post Road runs past what was Howe’s Tavern–now Longfellow’s Wayside Inn.  Just think, a road trip through Massachusetts may take you along a path followed by American Indians more than 500 years ago. If you are traveling in the area, you can find many articles on the internet specifying routes to take, wild areas and parks along the way, etc.

John Bent Jr.’s father John and his brothers Peter and Joseph had moved to the new town of Marlborough, where tragedy befell as I told before in the stories of Joseph (died in 1675) and Peter (died in 1678).

The map below shows a current day view of the portion of the old Connecticut path that went through John Bent’s farm, the location of Sudbury and Marlborough.  The distances are short–about five miles from the center of Sudbury to John’s property. Click on markers for more descriptions and a surprise.

Of course for John Bent, it was not just a scenic drive–it was his livelihood. In 1680 his daughter married John Adams.  However, once again John Jr. lost a younger sibling, when sister Martha Bent Howe ( 7x great-grandmother) in 1680 at the age of thirty-seven.

Apparently John Jr. was prosperous, because in 1683 he bought another 60 acres adjoining his farm.

John’s wife, Hannah, died about 1689 and on November 29, 1689, John Bent married his second wife, Martha Rice.    Martha , born in 1657, was twenty-one years younger than her husband, now in his early fifties. The marriage created one of those complex relationships that came from choosing spouses in a small community. Martha Rice ‘s father, Matthew had a brother, Edward Rice married to Martha’s new husband’s sister.

Although the Bent Family History assigns three children to John Bent and his first wife, Hannah Stone, the birth dates indicate that John’s two sons were born to his second wife, Martha Rice. In fact, John Jr., born in 1689, might explain why John married Martha, since they were married in November that year.  Two years later, another son, David, arrived.

Like most of my ancestors in Puritan villages, John Bent did his civic duty. In his case, the record shows that in March, 1701, he was assigned the job of Tithingman.He had reached the advanced age of 65. The Bent Family History describes tithingman as a position of authority both on Sundays and throughout the week. In fact, this New England Historical Society.com article, calls the men who were tithingmen, “The most powerful men in New England” and relates how one may have challenged George Washington. [NOTE: I have removed the link from this site because I have learned they are content scrapers–stealing content from other writers and websites. They are NOT affiliated with the REAL New England Historical Genealogical Society site, which is called www.americanancestors.org. I am sorry that I cannot credit the actual writer of the piece I cited. Please do not support scraper sites!]

Like Sudbury and Marlborough, Framingham fell prey to Indian attack. They suffered an attack in 1707.

Although I have been unable to find a place to get a copy of his will, or a recorded date of death, the Bent Family History quotes his will saying it was made in the first year of King George, which started in August 1714 when John was 79 years old.  The will says that he was frail and weak of body. An Index from ancestry.com and A History of Framingham says that he died September 15, 1717, in which case he would have been 82 years old.

At any rate, he lived much longer than most of his family. Only his older sister Agnes, who died at the age of 79 in 1715 proved as hearty as John Bent, Jr. His will left property divided equally between his two sons and says that he had previously given his daughter Hannah her share.  One record I have seen shows an Adams with property adjoining John Bent’s land, so perhaps he gave Hannah and her husband John Adams part of his land.

The Bent Family History does not mention a bequest to his wife Martha Rice. I have only found one record that gives an approximate death year for her of 1717. On the other hand, a descendant states on his tree that she must have died before 1716, because her father’s will does not mention her. I also have been unable to locate her father’s will.  So mysteries remain.

**Hannah Bent, John Bent Jr.’s daughter, married John Adams. Not THE John Adams, and not even a remotely close relative of THE John Adams as far as I can see.