When the Census Taker Gets It Wrong

We rely a great deal on Federal Census reports when piecing together family histories in the United States.  Sometimes the census taker lets us down.  This interesting example highlights the household of Benjamin B. Stone of Cambridge Ohio. Since I searched for Sarah Bassett, her name is highlighted in yellow.

The information as given on the census (W.M. and W.F. means White Male or White Female) with errors highlighted:

Despite the errors, once I had it figured out, putting this 1880 census together with the 1870 census told a sad story.

Ten years earlier, in 1870, Sarah lived with her sister and brother-in-law, but Lura and Benjamin Stone’s only child, Maro Farwell Stone and his wife and children also lived with them. Maro and his father both taught music.

A 14-Year-Old At Her Father’s Funeral

A family member has Mary Augusta’s journal. She shares it on line, and it includes poignant pages of the 14-year-old’s reactions to her father’s death and funeral.  Reading between the lines, I imagine that the body was in an open coffin in the living room of grandfather Benjamin Stone’s home in Cambridge, giving the family opportunity to visit and say goodbye as friends came to call. 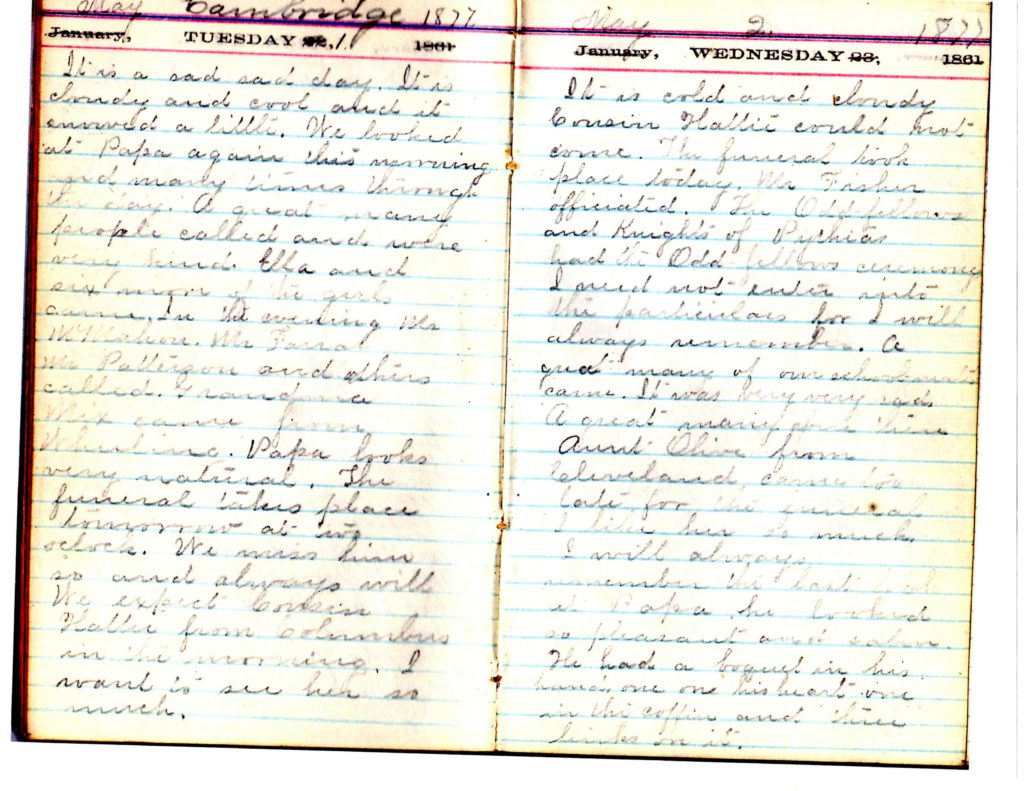 May  Tuesday 1, 1877. It is a sad, sad day.  It is cloudy and cool and it rained a little.  We looked at Papa again this morning and many times through the day.  A great many people called and were very kind.  Ella and six more of the girls came in the evening.  Mr. McMahon. Mr. Farrah. Mr. Patterson and others called.  Grandma Mix came from Wheeling. Papa looks very natural.  The funeral takes place tomorrow at two oclock.  We miss him so and always will. We expect Cousin Hattie from Columbus in the morning.  I want to see her so much.

May Wednesday 2, 1877. It is cold and cloudy Cousin Hattie could not come.  The funeral took place today.  Mr. Fisher officiated. The Oddfellows and Knights of Pythias had the Odd fellows ceremony. I need not enter into the particulars for I will always remember  A great many of our schoolmates came.  It was very very sad. A great many were there. Aunt Olive from Cleveland came too late for the funeral. I like her so much.  I will always remember the last look at Papa. He looked so pleasant and calm.  He had a boquet in his hands one on his heart one in the coffin and three limbs on it.

Personal Journal of Mary Augusta Stone, in possession of a descendant of Miss Stone.

Genealogical Notes of Mary Augusta Stone, in possession of a descendant of Miss Stone.

(The Mary Augusta Stone records are posted on Ancestry.com on public member trees.)