When the F.B.I. arrives in town, they create a momentary distraction from war worries and thoughts of family far away at Christmas time.

I estimate my grandmother Vera Anderson wrote this letter  to my mother, Harriette Anderson Kaser, about December 22 1943.  (The first page of the letter is missing and Grandma usually wrote the date or day of the week on that page).

Vera confirms the date that her son William (Bill) had sailed away from the states , December 11, and her plaint is that of so many during World War II. “Only wonder how he is and where he is tonight.” (That sounds kind of like a lyric to a WWII-era song.) Click on the image to get yourself some appropriate music)

I suspect I am missing two pages in this letter  since there is no greeting, and she usually starts with the date or the day she wrote the letter. Grandma  fills at least four pages with the usual rather mundane mentions of family–news that has arrived in letters, including a death of a cousin; the gas company leasing a right of way at the farm and the money goes for taxes; Grandma Vera , who has been working long hours, will send money rather than shopping for presents.

She mentions a card from her brother Will and sister-in-law, Jean.  Vera’s brother recently retired from work as a company lawyer, and does not send her a check as he has in the past.

The girls and Sonny refers to her grand daughters JoAnn and Romona and “Sonny”, their brother Herb who frequently stayed overnight at her house when they had school activities that kept them later than the school bus that headed out toward their farm. They had a nice Christmas program (probably at school) and Grandma had attended.

The news of a death in the family arrives in a note from an elderly aunt, “Aunt Lib”–Elizabeth Stout Cunningham who has been living with her daughter Mary because of Aunt Lib’s poor health.  May Hayes, the cousin who died, had signed Vera’s autoraph book when they were young girls. These members of the Stout branch of the family lived in Guernsey County, but May had moved to Columbus where she died, and no one sent word to the family members back in Guernsey County.,

But aside from family doings, the big news is the bank scandal, which Grandma Vera has pieced together from the various rumors racing through town.

From what Grandma has heard, the Killbuck Savings Bank was short of money, and at first it was believed that someone had robbed the bank. But when the F.B.I. investigators could not find anyone on the outside, they investigated employees. That is when they discovered that an employee had been forging bank notes.  Although he offered to pay the money back, he was arrested anyway, and is currently out on bail, thanks to his father-in-law.  Grandma feels sorry for his wife, but has no pity for him.

The story turns out to be even more dramatic than that told by Grandma.  I found articles in the Coshocton Tribune that spelled out the sequence of events. 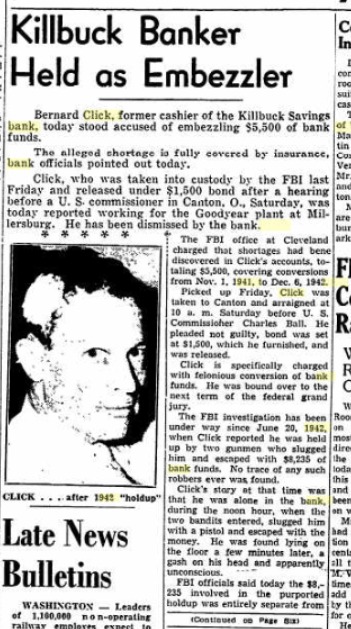 December 21, a front page story in the Tribune tells us that in late 1942, Bernard Click, a clerk at the Killbuck bank had reported two robbers came in an knocked him over the head and stole $5,500.  He was found lying on the floor with a gash on his head, apparently unconcious.  But as Grandma said, no outside source of the missing funds could be found. Ironically, when Click was fired by the bank, he went to work for the Goodyear plant in Millersburg–the place that Grandma Vera Anderson worked.

On the day Grandma wrote her letter, December 22, the Tribune revealed that when he was fingered, Click offered to pay back the $5,500. Nobody knew how that would affect his case, but he was out on bail and the Grand Jury would hear the case.

December 30, the paper reported that Click was charged with stealing $16,000 from the bank and would serve four years in jail.

Yes Wm sailed Sat Dec. 11. Only woder where he is and how he is tonight.  I know he would have been dissapointed if he couldn’t have gone.  He sent Bob a beautiful pen for Xmas.

I bet the dolly is cute. I hope I get a letter telling me your letter got there with the money.  Willa Berta intended to register that letter and she was sick that morning and Emmit sent it on not knowing I wanted it registered.  It will just be my luck for it to be lost.  I thought you could get what you wanted better than I could.  I do hope you got it. I sent it last week.

I never told you the Gas Co gave me $90.00, so much a rod for going across farm with a gas line. I paid it on taxes at farm.  I also paid the taxes on house here in town today. They have made a location for a deep well not far from where Wm had that gas well so lets hope we will get something good.

Now for the scandal.

The F.B.I. men picked up Click last Fri.  They say he has forged one note after another.  I heard first the bank was short but now they say he has made these notes.  Mr. Williamson just told me he heard he had the money to give them but they wouldn’t take it.  He is out on bail. I guess her father helped him.  Clifford Hyatt is in [the] bank.  The Inspectors have been here for several days. I understand they said they did not find anything out about the robbery on outside so decided they would look inside.

I feel sorry for ____[wife of the man accused] and girls but I don’t pity him.  Will let you know about it as it develops.

Sarah is at a sorority supper tonight.  I guess they are going down home this weekend.  Irene just came in Thought I would go to show but I don’t want to go.

A nice Xmas card from Will and Jean but not the usual check.  I expect they don’t have as much as they used to when he was working.  I hope he keeps well.

Haven’t heard from Maude. She owes me a letter.

The girls and Sonny was here last night. They had a nice Xmas program last night. I went for once.

A card from Aunt Lib telling of cousin May Hayes death.  She was still in Columbus and they never sent word until after she was burried.  Aund Lib said they was at Mary’s as she wasn’t able to do anything.

I must send them a card. I will not be writing you again before Xmas so want to thank you again and hope you get my letter with your Xmas. And hope Bunny gets her box.  Wish I could have sent you all more. I just gave Sarah and Bob also Herberts money and told them to get what they need most.

Wish you could be with us but as you can’t I wish you a happy Xmas. Give Bunny a big Hug (I don’t care if you squeeze her so hard as ‘the mudder’ did in the poetry.)  I know I could give her a big one if I had a hold of her.

Again wishing you a very Happy Xmas. We will be thinking about you.

With lots of love to you all and many thanks.

[Just a bit of information: I am an affiliate of Amazon.com. If you order something after licking on the album image in this post, I will get a few cents from Amazon to help support the site.]