Vera Anderson’s letters to her daughter reflect that although the war changes lives, the most important things continue.  Grandmas wrote her last letter to her daughter Harriette five days ago, and it seems there is much family news to pass on in this letter written on a Wednesday.  Illness, a musical interlude, a new baby coming, and a report to Harriette about the Christmas baked goods she sent back to Ohio from Iowa.

All her letters are addressed to both my parents–Harriette and Paul–but this one in particular answers Paul, who had written a letter to Vera and Guy. He apprently apologized for his terrible hand writing! I’m sure he was amused to hear grandma Vera’s description of his sister Irene, who worries when she doesn’t hear from him. 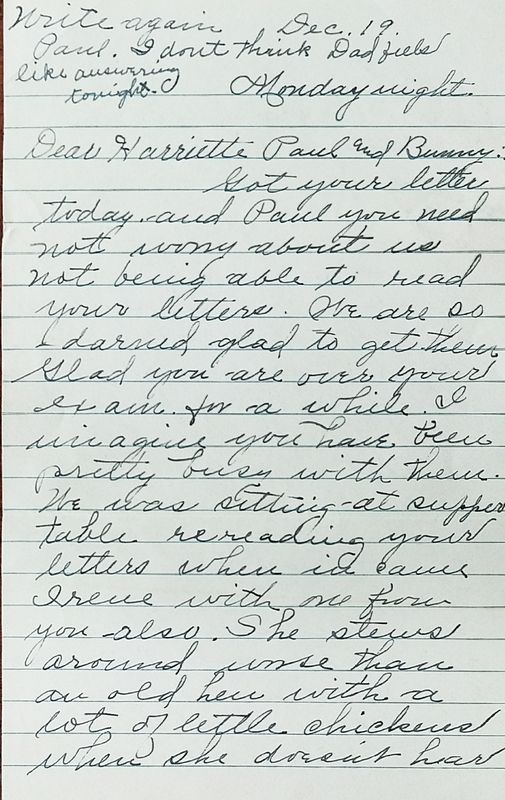 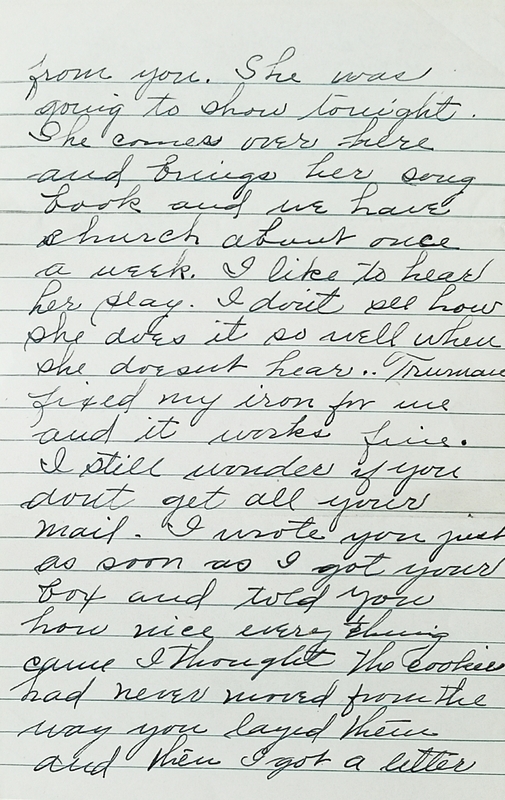 “She stews around worse than an old hen with a lot of little chickens when she doesn’t hear from you.”

That is a metaphor that would come easily to grandma, since she always had some chickens in a coop in her backyard and was familiar with their behavior.

It is cold season in Holmes County. She has been sick, 1/3 of the people didn’t show up for work, and Daddy Guy spent the night coughing.  She says she took the day off because of his coughing, but apparently she did not bother to take time off when she was sick And even though it is a day off, she has plenty of work to do.

Yet, she is worried about her son Herbert’s long hours and doesn’t see how Harriette could make all those cookies and cakes for Christmas. (Even though the baking probaby was keeping my mother sane, since she was lonely in Iowa and desparately missed her teaching job.)

Apparently, Grandma has decided–or perhaps mother urged her–to open the Christmas package containing cookies and cake before Christmas.  I wonder if Mother was making Mrs. Lanham’s fruitcake that year? I imagine she probably used the same recipe as Grandma used for Sugar Cookies. Whatever she baked was certainly appreciated, and grandma put some in her “pail”–her lunchbox and shared them at work.  Remember because of war time and sugar was rationed.

Names mentioned regularly in these letters include:

William (William J. Anderson, Vera’s son and my Uncle Bill); Sarah (Sarah Anderson, wife of my Uncle Bill who was sailing into the Pacific.)  Sarah and their son Bob (a high school student in 1943) lived on the farm that once belonged to my great-grandfather, but later she moved in to town and lived in Grandma’s house.

Will and Jean (William Morgan Stout, Vera’s brother, my great-uncle, and his wife Jean. They lived in New York City)

A New Baby To Join the Family

In this letter, she also mentions Frank and Ruth Fair. Frank is Guy’s grandson through his first marriage and his daughter Rhema Anderson Fair–the handome pilot and his girl. They have some big news when they come to visit. 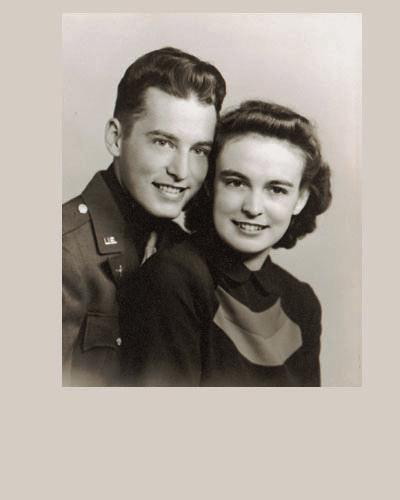 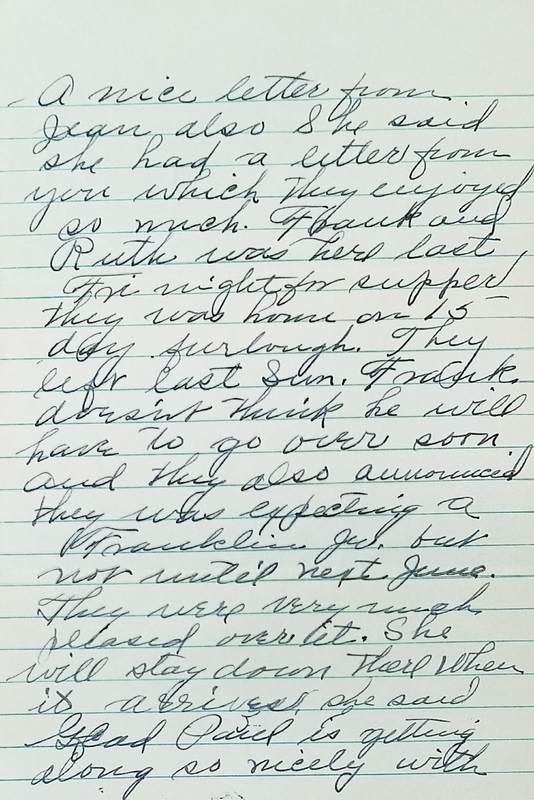 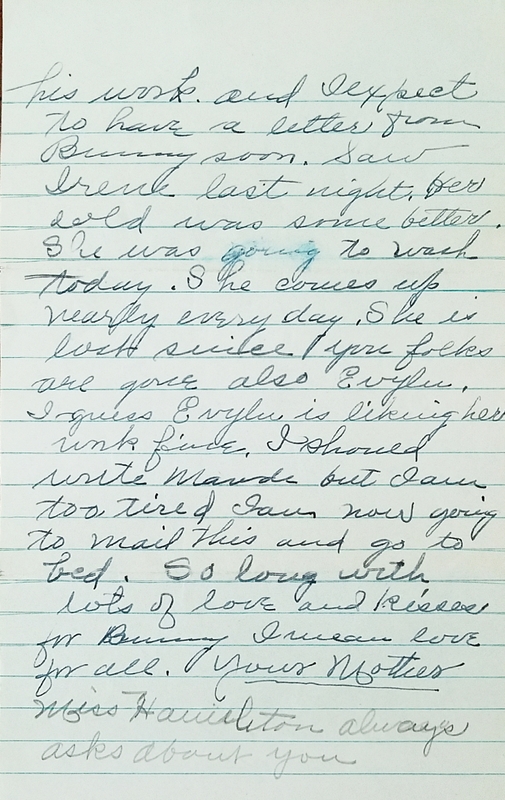 Got your letter today and Paul you need not worry about us not being able to read your letters. We are so darned glad to get them.  Glad you are over your exam for a while I imagine you have been pretty busy with them.  We was sitting at supper table re-reading your letters when in came Irene with one from you also.  She stews around worse than an old hen with a lot of little chickens when she doesn’t hear from you.

She was going to the show tonight. She comes over here and brings her song book and we have church about once a week. I like to hear her play.  I don’t see how she does it so well when she doesn’t hear.

Truman fixed my iron for me and it works fine.

I still wonder if you don’t get all your mail.  I wrote you just as soon as I got your box and told you how nice everything came I thought the cookies had never moved from the way you layed them and then I got a letter wondering if it had come.

I have delivered Keiths & Irenes.  Also gave Sarah & Bob theirs.  I gave Sarah & Bob, Irene & Herberts all some cake and cookies.  I don’t see how you ever made them all and they were so pretty and good.  Your fruit cake is delicious.  I put some in my pail and I gave the ladies that eat with me all a taste and they thought it was fine.

I didn’t work today as Dad had an awful night coughing last night.  I guess he took my cold.  I have just been sick.  1/3 of the people that worked was off with colds.  They did not get the shop warm those cold days and we just stood around and shook.  My cold is better. I took tablets every 1/2 hr for 2 days.

I made use of the day today. I washed and went to Millersburg with Herbert and drove his car back as he was going with boys.  He worked 12 hrs yesterday came home at 10:30 went back at 3:30. I don’t see how he stands it.

We are going up there Xmas day, but Herbert has to work so it will be a hurry up dinner.

A nice letter from Jean also. She said she had a letter from you which they enjoyed so much.

Frank and Ruth was there last Fri night for supper. They was home on 15-day furlough.  They left last Sun.  Frank doesn’t think he will have to go over soon and they also announced they was expecting a Franklin Jr. but not until next June.  They were very much pleased over it.  She will stay down there when it arrives she said.

Glad Paul is getting along so nicely with his work and I expect to have a letter from Bunny Soon.  Saw Irene last night. Her cold was some better.  She was going to wash today.  She comes up nearly every day.  She is lost since you folks are gone also Evyln.  I guess Evylin is liking her work fine.

I should write Maude but I am too tired. I am now going to mail this and go to bed. So long with lots of love and kisses for Bunny. I mean love for all.

Miss Hamilton always asks about you.