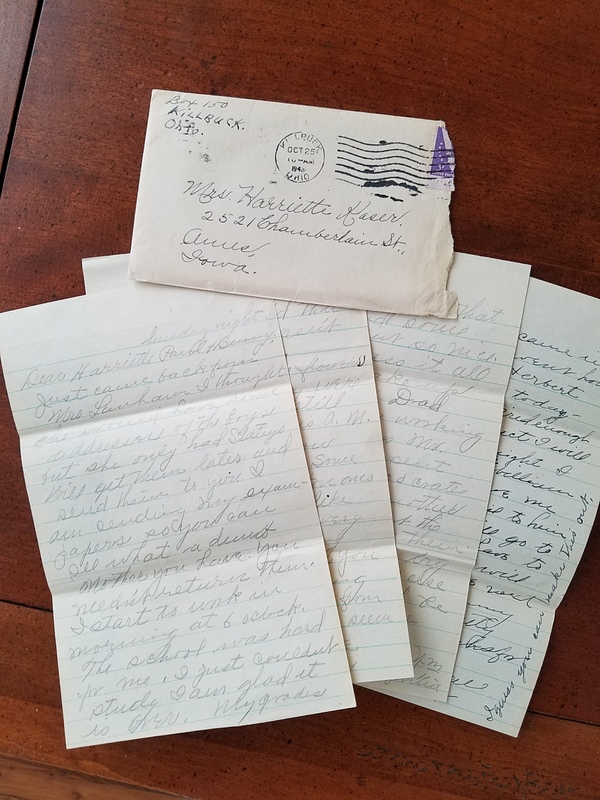 Letter and envelope with 3 cent stamp, October 25, 1943 from Vera Anderson to her daughter Harriette A. Kaser

My favorite photograph does not exist.  It is a picture of my Grandmother, Vera Anderson, as a “Rosie the Riveter.”

The collection of old photographs passed on to me by my mother and to her by her mother and to her by her mother, contains many gems.  I have shared many of my favorites from those photos–Grandma Vera Anderson in her baseball uniform; the whole clan of Andersons and Stouts in front of a farm house that still exists; my mother and her two brothers dressed up like fancy dolls when they were toddlers, the Anderson family during World War II….and many more.

But the photo that I have only in my imagination shows my grandmother as a Rosie the Riveter. You’ve seen the popular poster of Rosie, who went to work in factories building war materiel during World War II. 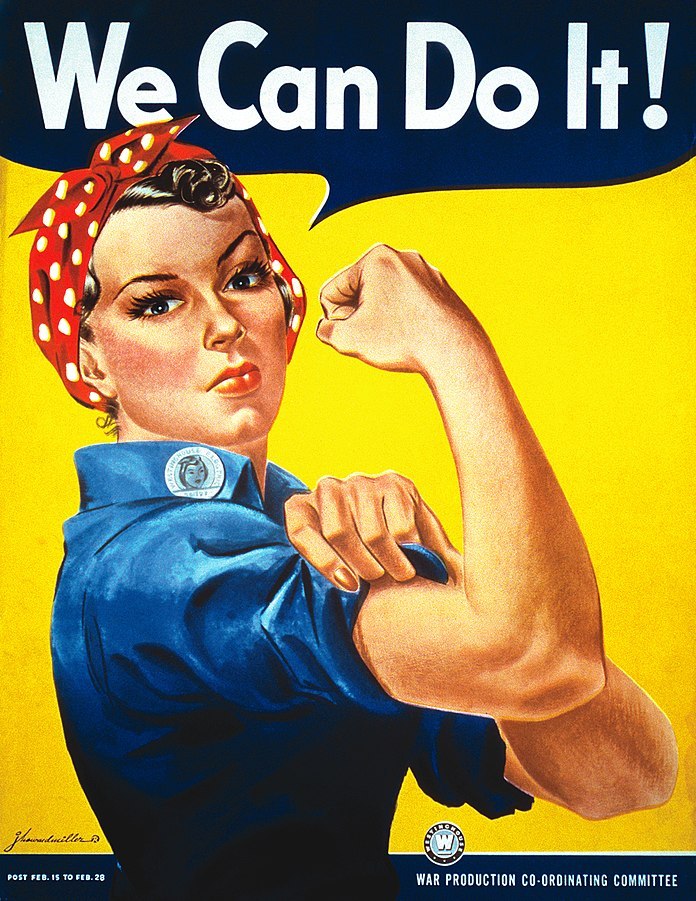 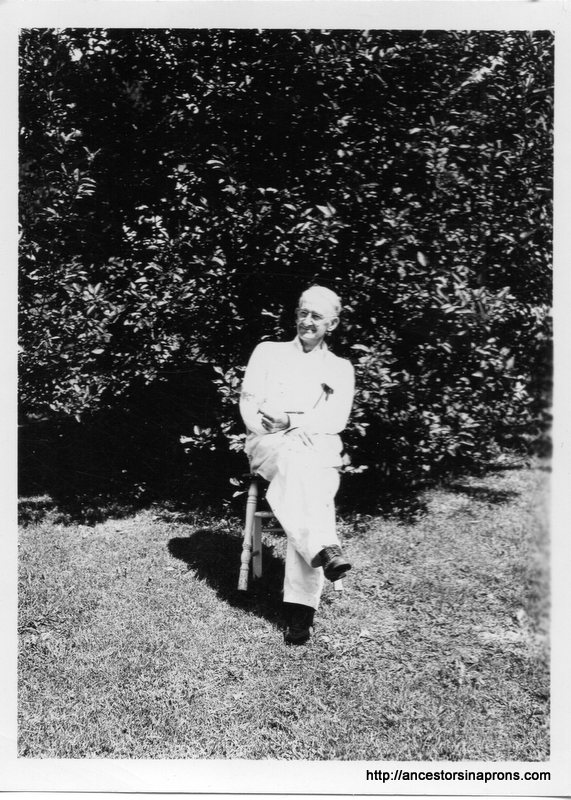 Mom is going to work Mon. morning  at Goodyear. She has her slacks (Hell) and all that goes with the job.

Later in the letter he says:

I may get job caring for three Parks in Holmes Co. $124 year around. I am afraid of inflation. Mom working and if I get parks I can work in Williamson about 4 days a week but just so it doesn’t inflate Mom’s Slacks I don’t care.

He and grandma did care for parks for a while. I remember going with them when I was a small girl.  And Williamson refers to a man who roomed with them, and ran a factory putting together wooden boxes. 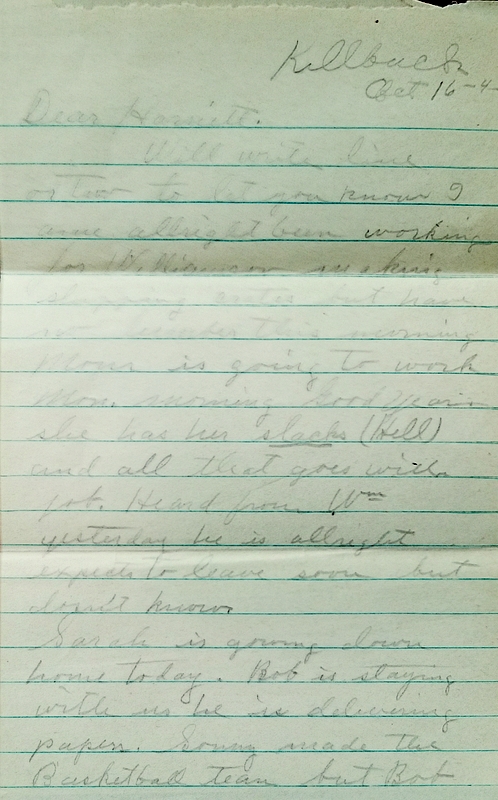 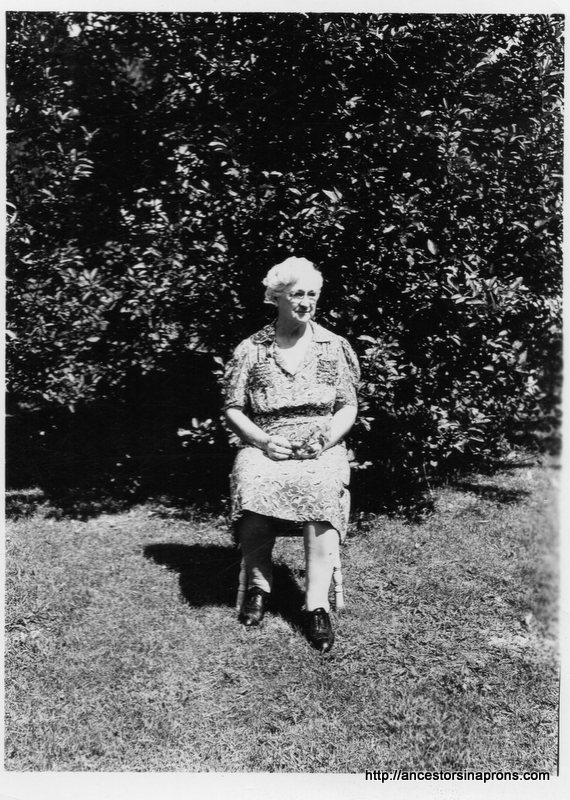 Since Grandma did not leave behind a picture of her in the slacks that my grandfather hated so much, I have to rely on a picture in words from her letters in 1943 to recreate her life as a Rosie the Riveter factory worker during World War II.

Daddy Guy had more reason to resent Grandma’s job than just the slacks.  He almost had the job himself.

In late September or early October, Grandma wrote to mother:

Dad got notice to come and take ex{am}. For work at GoodYear in Millersburg today at 60 cents an hr. He is all excited about it. I wonder if he will pass. I think we could get along but he seems to want to try and that will be a good way for him to find out. I hope he can for it would be better for him to being doing something and I think he would be happier.

However in the next letter we learn it is not to be.  Grandma and Daddy Guy had closed the restaurant (pictured at the top of the page) when Daddy Guy had a severe heart attack. He had not had a regular job since then.

Dad thought he had a job. They called him and told him to bring birth certificate Social Security Card and come up so he did and they said you go to Dr. Cole for examination and come back here in morning at 7:30. So he did but when they opened the letter from Cole. The man said he was very sorry but Dr. said No. He had a bad heart and there wasn’t any thing they could do. Dad was awful disappointed.

Mr. Williamson said for him to come up to {his} place and see if he could stand to make crates. He could work just as fast as he wanted to or as long as he wanted to as it would be piece work. So I guess he will try that.

On October 16, Grandma tells Mother that she will start “school”–training for her new job–at the Goodyear Plant in Millersburg. At the age of 62, Vera Stout Anderson is becoming a “Rosie the Riveter.” Just a couple weeks after her husband was turned down because of his health, she has been hired. He writes his comments about slacks that you read above, and Grandma says:

Yes I am starting to school Monday. 8 hrs until we go through school which is 6 days then we work 10 hours. I am riding with Mrs. Bernard Smith and Priscilla Spellman at 7 a.m. but at 6 when we work. I am still going to help out at the show as I won’t work night shift. I will not stay if I have to.

I am sending my exam papers so you can see what a dumb Mother you have. You needn’t return them. I start to work in morning at 6 o’clock. The school was hard for me. I just couldn’t study I am glad it is over. My grades in shop were 92% -85%, 97-94. Not so bad for an old woman. We only went 8 hrs to school {a day} but will work 10. I will tell you all about it after this week. 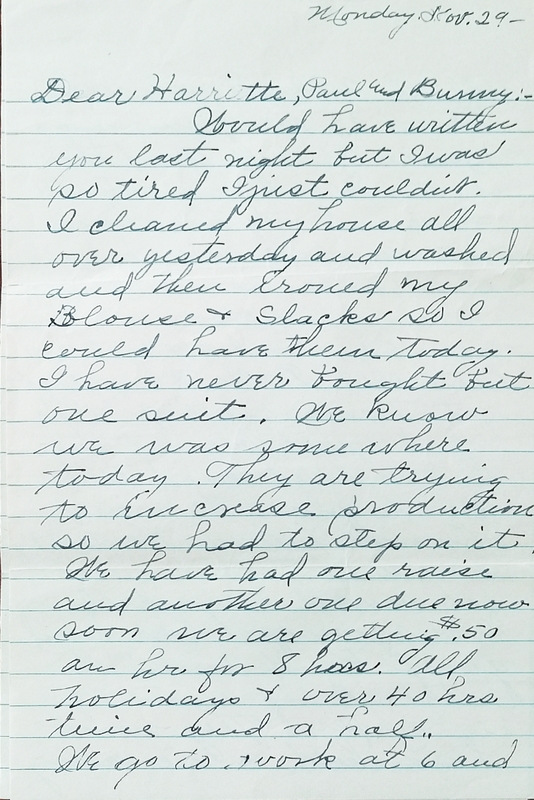 Vera’s letter to her daughter about her WWII factory work Nov 29 ,1943

Her factory work was not her only contribution to the war effort. [Delmar Alderman was the owner of the hardware store and good friend of my father. You can see his picture here.] 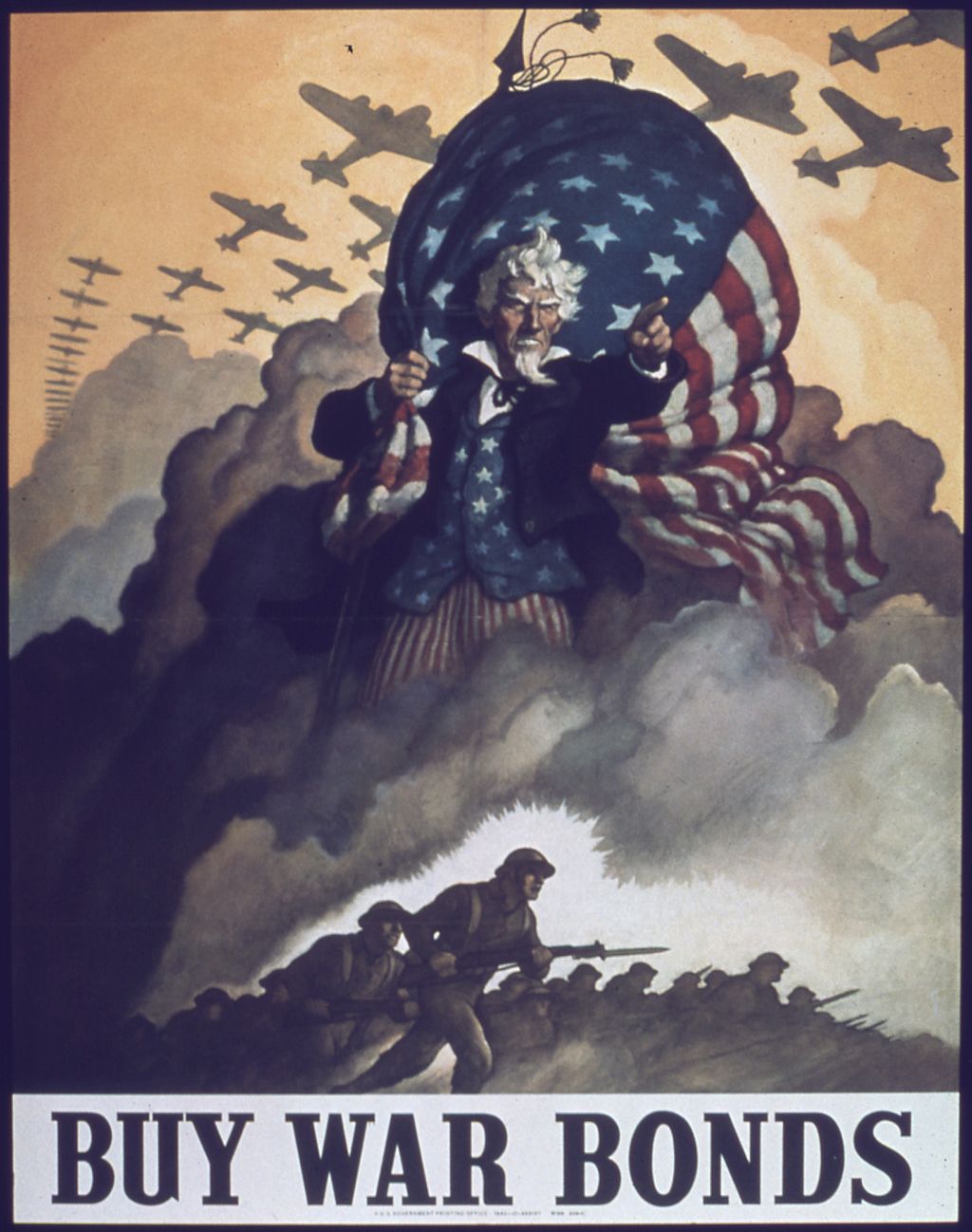 I was out today getting War Funds for Delmar he put me on to get from here up to Apts and railroad St. Which I did. The ones that were at home.

Even while working eight hours a day at the Goodyear Plant, Grandma was taking care of rooms she rented and she also worked some nights at the end of the week at the movie theater which was only three doors away from her house. She sold tickets.

I am still[working] at the show and it makes it awful late for me when I have to get up at 4:30 every morning.

Would have written you last night but I was so tired I just couldn’t. I cleaned my house all over yesterday and washed and then ironed my blouse & slacks so I could have them today. I have never bought but one suit.

We know we was somewhere today. They are trying to increase production so we had to step on it. We have had one raise and another one due now soon we are getting $.50 an hour for 8 hours. All holidays and over 40 hrs time and a half. We go to work at 6 and get off at 2:30. I get up at 4:30 every morning.

Note that Daddy Guy was promised sixty cents an hour when he applied for a job at the factory.  After working two months and having a raise, Grandma is still only getting fifty cents an hour. The Rosie the Riveter revolution brought new jobs to women, but at a lower wage than men were paid. Women are still waiting for the satisfactory outcome of that particular revolution.

I must tell you how I rate at shop. They transferred me over to Pre Assembly and it is much nicer and cleaner. We make parts on jigs and then they are drilled. They told Mrs. Bell and me today that tomorrow we would build them and each of us would have a man to drill them so it will be nice.

I must get some new slacks. I only have one pair and they are getting pretty thin. I wash them and dry them in evening.

Apparently the working conditions are not ideal, as she writes in this December 20 letter:

I didn’t work today as Dad had an awful night coughing last night. I guess he took my cold. I have just been sick. 1/3 of the people that worked was off with colds. They did not get the shop warm those cold days and we just stood around and shook. My cold is better. I took tablets every 1/2 hr for 2 days.

Nowhere in her letters does she mention what she is working on.  It is possible that since they were manufacturing parts, they really did not know what the final product was, but as I explained in this post, the Goodyear Aircraft Corporation plant in Millersburg, Ohio, was making Corsair airplanes for the Navy.

It is also possible that Grandma was just being cautious.  Everywhere, posters warned people not to give away where their servicemen were going, and in factories, the Rosie the Riveter gals were warned not to talk about what they were doing.  These “Loose Lips Sink Ships” posters were not an abstraction to Vera Anderson, whose letters are filled with her concern for her son William J. Anderson, a SeaBee deployed to the Pacific. 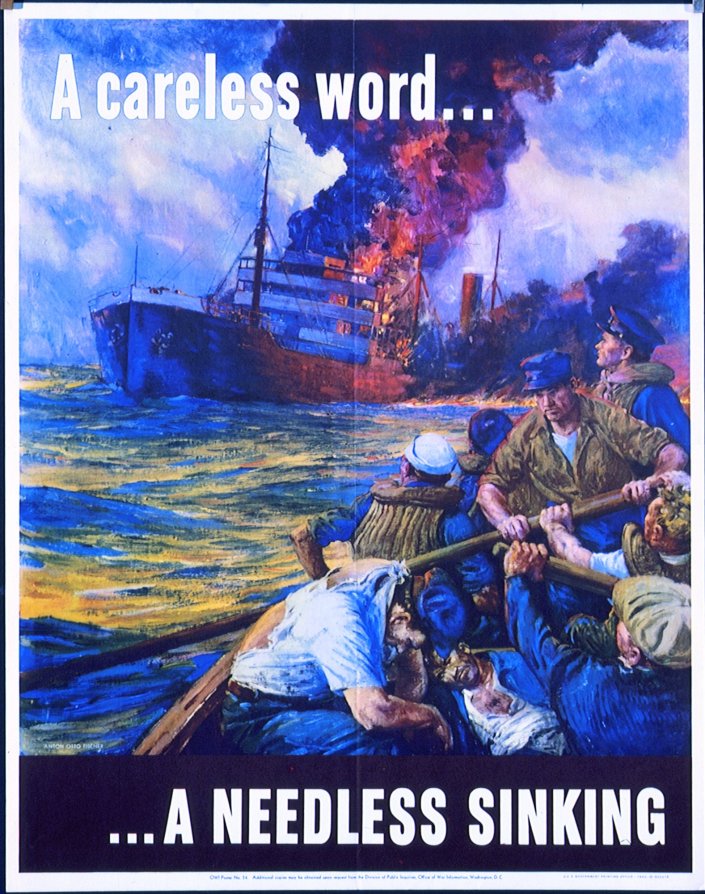 Words and posters paint a picture of my Grandma in her role as Rosie the Riveter.  I do not know how long she worked as a Rosie the Riveter, but as long as she was needed to help, she would be there.

UPDATE, April, 2022.  I recently learned about an organization that honors Rosie’s. Rosietheriveter.net website will tell you all about it.  I was so happy to be able to recognize the hard work my grandmother did to support the war effort. I encourage you to check it out if you have a Rosie in your family. 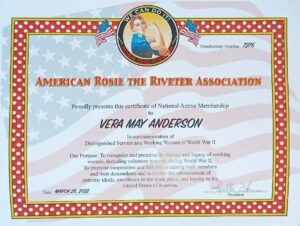 2 thoughts on “My Grandmother and Rosie the Riveter”