Forget the old chestnut “Who was buried in Grant’s Tomb?”  Today we talk about the first person to be buried in Arlington Cemetery. Civilian, woman, cookbook author Mary Randolph. Follow that link to learn more about her life, because I’m going to concentrate on her cooking and household management.

In a book titled The Virginia Housewife: or Methodical Cook, published in 1842, Mary Randolph addressed the well-to-do ladies who managed homes and plantations in Virginia. These women wanted advice suited to the new world, rather than having to depend on cookbooks from England. Had Mary read those early books? The books by Amelia Simmons aimed at “the poor orphans” and by Hannah Glasse, writing from England and addressing servants, did not help her compatriots in Virginia, apparently.

Most cookbooks of the time, as we have seen countless times in my various food posts, did not believe exact measurements were necessary.  The authors assumed a basic knowledge, that Mary Randolph admits she did not possess when first married.

“The difficulties I encountered when I first entered on the duties of a house-keeping life, from the want of books sufficiently clear and concise to impart knowledge to a Tyro, compelled me to study the subject, and by actual experiment to reduce everything in the culinary line, to proper weights and measures.”

Sometimes, she sounds a bit like Benjamin Franklin in her ‘rules for living.’

Early rising is also essential to the good government of a family. A late breakfast deranges the whole business of the day, and throws a portion of it on the next, which opens the door for confusion to enter.

Her introduction gives us an interesting peek into the lives of the female head of household in a slave-owning culture.  You may be surprised when you read the introduction to her book to see her strong moral stand against leaving the servants and slaves to their own devices.  Whatever happens in the household can be credited to the management practices of the lady of the house. However, there is no hint of concern for the workload or improvement of the life of the slaves and servants–just the reputation of the lady.

I find something to love in all these old cookbooks, and my favorite advice from Mary Randolph is this:

Before a pudding or cake is begun, every ingredient necessary for it must be ready; when the process is retarded by neglecting to have them prepared, the article is injured.

The French call it “mise en place” and if I could give only one piece of advice to fledgling cooks, it would be prepare everything in advance.  It saves you from getting into a recipe and discovering a missing ingredient.  It saves you from having the cake in the pan while the oven is still cold.  It saves you a whole lot of work and makes things seem effortless. 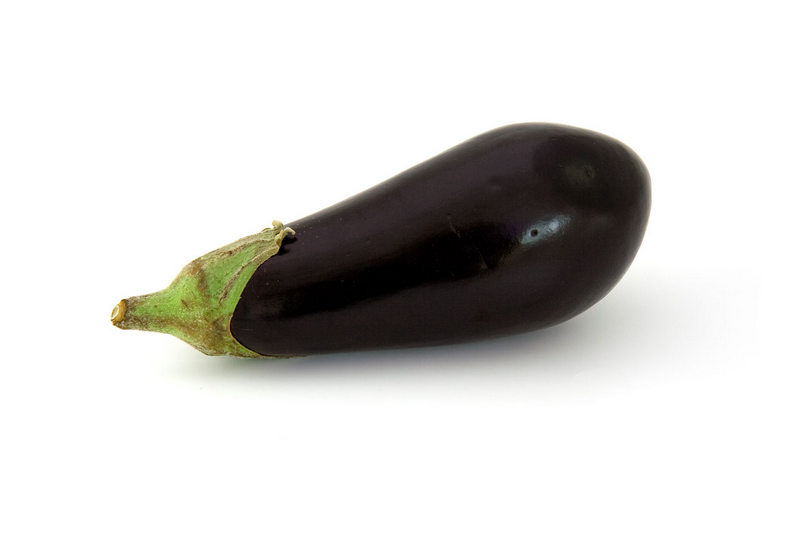 The purple ones are best; get them young and fresh; pull out the stem, and parboil them to take off the bitter taste; cut them in slices an inch thick, but do not peel them; dip them in the yelk of an egg, and cover them with grated bread, a little salt and pepper–when this has dried, cover the other side the same way–fry them a nice brown. They are very delicious, tasting much like soft crabs.

I love eggplant, and cook it frequently.  One of my go-to side dishes is the simple breaded, fried eggplant slices.  So I wanted to see if Mary Randolph’s technique could improve on my usual way of doing things.  Spoiler: It Did.

How could such small changes in a simple recipe make such a difference? 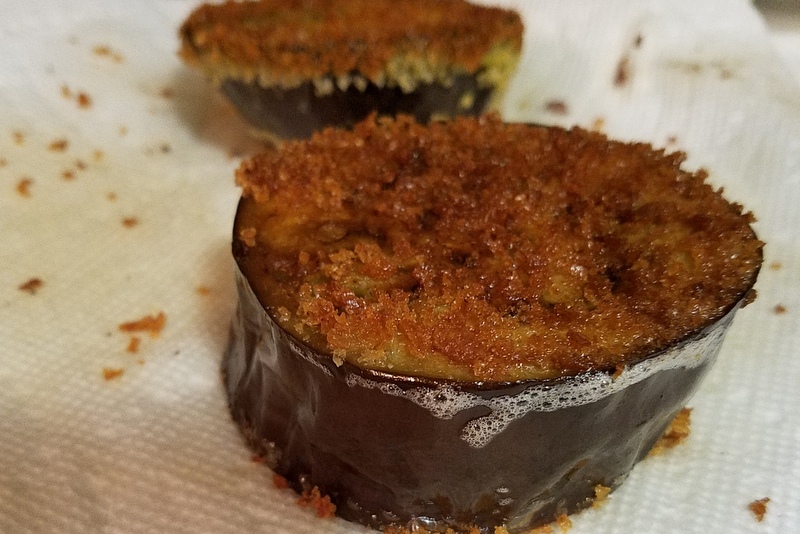 First, I generally cut the eggplant way thinner than one inch, partly because thicker slices do not cook in the middle before the outside gets browned, when you only cook them in the skillet.

So although horticulturists have bred out the bitterness, removing the need for pre-salting and parboiling, I cut the slices one inch thick as directed, and parboiled them as directed

Second, it sounds as though she might be using a much younger eggplant than mine.  I generally peel anything other than the tiny Japanese eggplants because the peel is too tough to eat. I couldn’t figure that out for sure, but nevertheless, hesitantly followed her instructions not to peel the eggplant.

Third, because I do not bake bread every other day as they probably did on the plantation, I did not have appropriate crumbs, so I cheated and used Panko.

There were no negative effects in using Panko.  I would question her using only one egg “yelk”. The one yolk did not quite coat all five of the slices that I got out of my eggplant.

Fourth: In the past, I have dipped, breaded, flipped over and dipped, breaded the other side.  I learned that it works much better to let one side dry before dipping the second side.

Who would have thought that I could learn so much from such a simple recipe?

The parboiling not only ensured that the inch thick slices (much more satisfying than my thin slices) cooked all the way through, but amazingly, we could easily cut the skin with a knife and it was a delicious addition.  I will definitely be cooking eggplant the Mary Randolph way in the future.

LEARNING FROM THE OLD MASTERS

My experiment with this recipe convinces me that Mary Randolph did indeed know her business. By the way, last week’s cookbook author, Amelia Simmons suggests straining an egg after beating, and although Mary Randolph doesn’t mention that trick, it seems to me it would be a good idea for the “yelk” used for dipping breaded foods. So, now I am not only getting favorite hints from these women who wrote cookbooks, but beginning to combine those hints from the past to improve today’s cooking.

Randolph’s book is available in many formats. I recommend Project Gutenberg, where you can get various formats free.