Although this story about Christian Henrich and his wife Margaret and the Mass House, continue to be fascinating, I now believe I was barking up the wrong tree branch, and they are not actually related to me.  I explain elsewhere how that happened.

It is worth noting that the Catholic church history remains important to my family tree, as my father’s grandfather, Henry Allen Butts and his wife Maria Smith were Catholics. But Joseph Kaser and his wife were members of Reform congregations.

BEWARE if you are researching the family of Joseph Kaser. There apparently were two Elizabeth Stahlers from Berks County, and the one I have been researching, whose parents were Adam Stahler and Eva Maria Henrich, is NOT the one who married Joseph Kaser.

Additionally at the bottom of the post, you will find links to family homesteads in my actual ancestor lines.

Although the “Mass House” built by Christian Henrich/Heinrich is long gone, someone who visited the spot took this picture of the still extant farmhouse from the 18th century. (NOTE: April 2, 2018. I am now in touch with the Joseph who entered information on Find a Grave, and will probably be making several adjustments to the information below. BEWARE of facts in flux.) 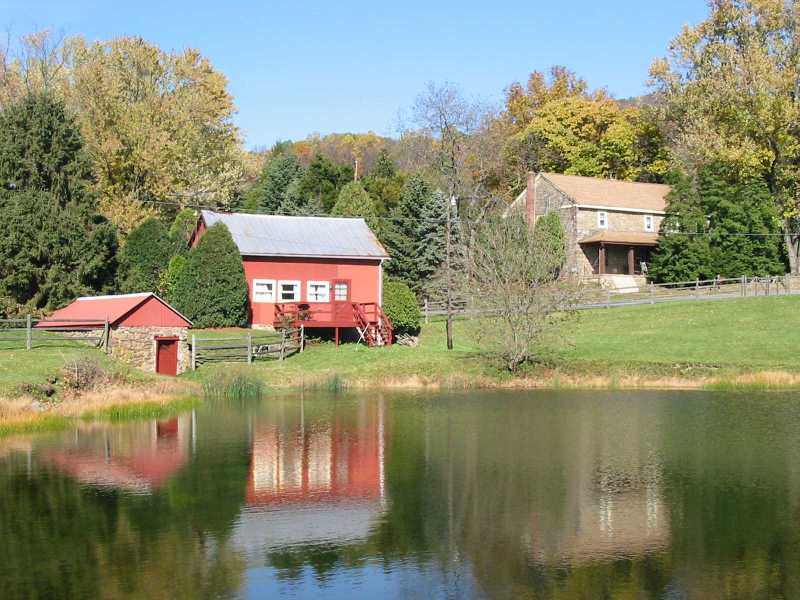 When I wrote about the Henrich family in my post about Elizabeth Stahler Kaser, I said this (which turns out to apply to a different Elizabeth Stahler who WAS the daughter of Christian Henrich, but NOT the wife of Joseph Kaser.):

According to the records (written in German) kept by Jesuit priest, Rev. John Baptist Ritter, Elizabeth Stahler was born January 19, 1775. The priest baptized her on the 19th of March at her grandfather, Christian Henrich’s home.  Christian (and his wife Mary Margaret) were as religious as his names sounds.  He built a sort of way station for the priests on the circuit who stopped by to say Mass and officiate in church rituals.  The name, Asperum Collem, meaning ‘sharp-pointed mountain’ in Latin, appears frequently in the Goshenhoppen Register as the site of baptisms and marriages. Today the place, in Berks County, near Allentown Pennsylvania, is known as Spitzenberg Mountain (or Hill) (sharp-pointed mountain/hill in German).

When I went looking for more details on Asperem Collem, I found the picture at the top of the page.  It definitely made this an exciting day of research. Today I would like to fill in a little more of the detail in that sketch of Christian Henrich’s home and Asperum Collem.

Religion, as I have discussed earlier, was an important part of the immigrants’ lives.  And the influence reached far beyond Sunday services. As in New England with the meeting houses that doubled as places of worship, the Pennsylvania churches provided a place for the community members to gather. Although unlike New England, there were many denominations in the German community. The church kept the language alive. The church provided social welfare and education. But in the early days, settlers were so far apart that they could not build a church building, so they relied on traveling ministers and priests.

A church opened in Goshenhoppen in 1754, established by the Jesuit priest, Father Schneider, to serve the itinerant priests serving the territory too far from the church for regular attendance. (For the complete history of the early Pennsylvania Catholic church and Goshenhoppen Mission, see http://GoReadingBerks.com )

My German ancestors came from both Reform/Lutheran religious roots and from Catholic roots.  When they arrived by ship in Philadelphia in the mid to late 1700s, they moved on as quickly as they could to better farming country in eastern Pennsylvania.  The towns were widely scattered in that area, and, at first, more wilderness than cultivated fields and village streets.

Most importantly for the researcher, the church kept records. Those traveling priests and ministers provide essential records for historians.  And the Goshenhoppen Register, records births, baptisms, marriages and deaths in Berks and other counties (  Bucks, Northampton, Montgomery, Lehigh, and Lebanon) where my German ancestors lived.

DIGRESSION ON HIS BIRTH AND DEATH DATES

At this point, much research remains on Christian Henrich.  Conflicting data shows two possible arrival years on two different ships, I have not yet seen a translation of his probate papers into English, I have more than one possible birth record in Germany, and although there is a picture of a tombstone, I cannot be certain it is correct when it says he was born December 13, 1715 and died when he was 80.  For now, I will assume that the information on the tombstone is correct.  According to the person who put the picture on Find A Grave.com, the picture was taken by a relative several years ‘previously’  and no tombstones remain where it was found. Rather shaky evidence, so you see why I have much research to do.

Whenever he actually arrived, and it looks like 1732  a better date than 1742, by 1746, he bought his first tract of land.  And by 1767 and 1769 he had prospered enough to expand his farm with two more purchases in Berks and Lehigh Counties of Pennsylvania.

If “Joseph” on Find a Grave is correct, the house you see in the picture at the top of the page dates to the 1760s–post Revolutionary War. However, Christian must have built another house prior to the pictured one, to house his growing family, as he had seven/eight children between 1748 and 1757. (One of those was my Eva Maria Henrich Stahler, whose story about her struggle with a widow’s pension I have been writing about.)

Apparently,Christian and his wife opened their home to Catholic services soon after building it. But at some point, they built a small stone house as a Mass House where priests could hold services, but also could spend the night, if their travels left them in the region more than a day. Because of that, it could also be called the priest’s house.

The Goshenhoppen Register frequently notes that a baptism or marriage took place in  the house of (various parishioners.) Because of those records, we learn that many of the Henrich children and grandchildren were baptized/or married at the house of Christian Henrich, frequently described as “Asperem Collem,” or “near Asperem Collem” (with the Latin named spelled in various ways.) I cannot tell when Christian Henrich built the separate Mass House, but the earliest baptisms that I found recorded at his house took place in November 1762, and the last one that I saw was in November 1785.

The saddest part of the story about the farm involves a cemetery.  Some believe there are approximately 100 graves on the hillside behind the house, but the stones have all disappeared. [I wonder if the imaging that indicated bodies buried might have revealed an Indian burial ground?  At any rate, the jury is out on whether the 100 graves are real or local lore.

What is known, according to Joseph Eckroad, is that there are four stones on the property.  Christian Henrich and his wife, an obelisk of Indian who requested to be buried near his friend Christian, and a foot stone with initials.

These may be the only remnants of a large family and Catholic community that once gathered at Christian and Margaret’s farm. 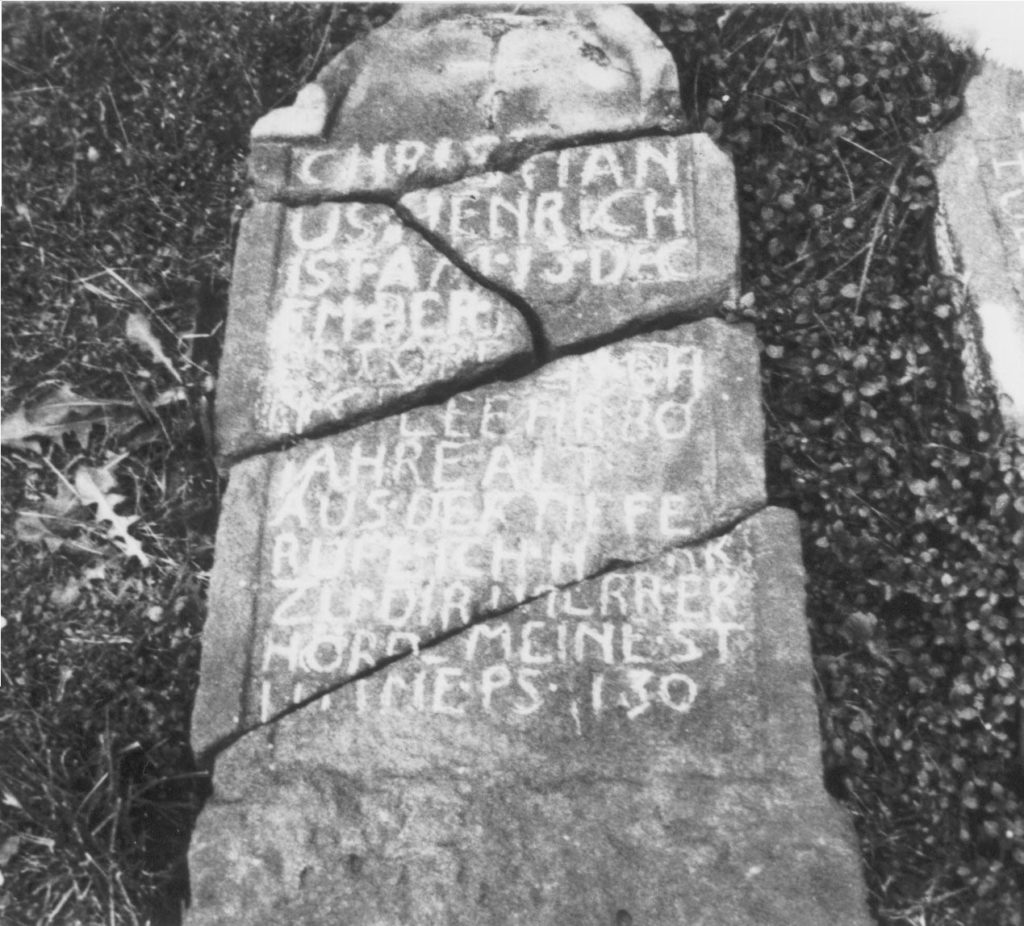 The reading above is from the Find a Grave page posted by Joseph Eckroad.  The translation below, is mine (with a little help from Google).

Joseph Eckroad writes to me in an email, that he now believes there is a different reading of the tombstone. He has posted an update, with the first part of the German inscription, and his explanation on his Find a Grave page for Christian(us) Heinrich, Sr.

There is an alternate reading for part of the tombstone (with colons representing the raised dots):

(Credit is due to my unofficial assistant at Ancestors in Aprons, Cathy Meder-Dempsey, who figured out what PS 1.30 meant. She further furnished me with extra information.

Psalm 130 (Vulgate numbering: Psalm 129) is the 130th psalm of the Book of Psalms, one of the Penitential psalms. The first verse is a call to God in deep sorrow, from “out of the depths” (Out of the deep), as it is translated in the King James Version of the Bible respectively in the Book of Common Prayer.

It has been set to music and is a funeral song. https://en.wikipedia.org/wiki/Psalm_130

It seems obvious that someone has used chalk or paint to bring out the letters on the old stone, and so it is difficult to tell if it is completely accurate.

The gravestones are gone. The Mass House no longer stands.  The picturesque pond was added later and the two outbuildings we see also date after Christian’s time. But it seems to me a small miracle that even part of his house from the 1760’s still stands. I might even get to visit the old homestead if I ever get to eastern Pennsylvania.

EARLIER ARTICLES ON THE OTHER OLD HOMESTEADs

The theme this week in Amy Johnson Crow’s 52 Ancestors Challenge suggests we write about “The Old Homestead.”  You might want to check out some old posts that I wrote about various “old homesteads” in my family.

Jedidiah Brink. This very popular posts uses an app to meld photos taken by a Brink cousin in Ohio and their explanations, plus my research of this great-great grand uncle’s home in Holmes County.

Morgan, Stout, Anderson.  Several homes near Killbuck Ohio that were the homes of my mother’s mother and father, grandmother and grandfather, and great-grandmother.

William Morgan Stout. Three apartments in New York City occupied at various times around 1900 by my great-uncle had some interesting history.

Frederick/Frederich Badertscher Sr.  Turning to my husband’s family I show a really old photo of his great-grandparents, Swiss immigrants, sitting in front of their farmhouse near Kidron, Ohio.

(?)Württemberg, Germany, Family Tables, 1550-1985 A possibility of Christian Henrich’s birth in Germany and his family.  Names a Christianus but date does not agree with tombstone (March 1717). Accessed at Ancestry.com

2 thoughts on “The Mass House: Making a Home for the Church”