Although this story about Adam Stahler and his widows pension continue to be fascinating, I now believe I was barking up the wrong tree branch, and they are not actually related to me.  I explain elsewhere how that happened.

BEWARE if you are researching the family of Joseph Kaser. There apparently were two Elizabeth Stahlers from Berks County, and the one I have been researching, whose parents were Adam Stahler and Eva Maria Henrich, is not the one who married Joseph Kaser.

For a couple of weeks now, I have been sporadically attacking a file of 79 pages of legal papers regarding widows pension benefits.  Many of them are illegible, either because age has faded them or because the person who wrote testimony or documents needed one of those penmanship instructors I talked about recently. 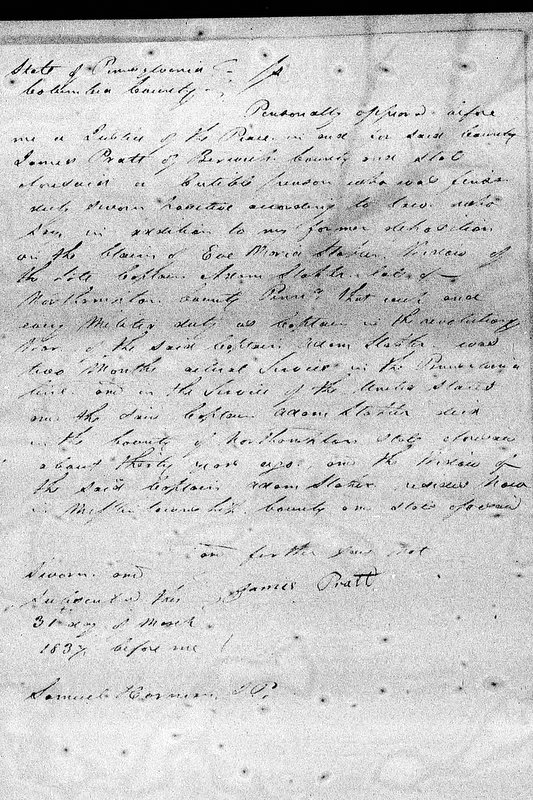 And that is far from the worst of the bunch.

Although at least half of the pages still wait for discovery, my magnifying glass and I have figured out enough to fill you in on most of Eva Maria Stahler and her children’s battle to get what the government owed them. The first half of the file has to do with Eva Maria Stahler applying for an increase in her widows pension when she was 83 years old.

The rest of the file is about the attempts after her death to get the pension increased.  Christian Stahler and his sister Eva Maria (the 2nd) were the only remaining children by the 1850s when they brought the case up again. Eva Maria had married and moved to Ohio.

Along the way, I am also piecing together the details of Adam Stahler’s military history, which I will relate in the future, but I am impressed by the number of notable battles he took part in.  For instance, the battle of Brandywine, in which ill-clothed colonial soldiers lost to the British, and the battle of Germantown, another losing battle, but one that turned the ragtag militias into a more disciplined army.  I will return to Adam’s Revolutionary War experiences at a later date. Now back to Eva and her battles with bureaucracy.

As I mentioned earlier when talking about Adam Stahler’s pension, the laws governing pensions for Revolutionary War veterans changed frequently. Early payments were only for the injured, and later for those in need. When Adam Stahler died in April 1804, widows and children of Militia member were not eligible for full pensions. In 1832 an act provided for a widows pension. However, on July 4, 1836, legislation passed that would allow the widows and children of Pennsylvania militiamen like Adam to collect higher payments for officers and their widows.

The records show that Eva Maria Stahler had a Certificate of Pension issued on 27 July 1833 and the pension payment were made retroactive to 4 March 1831. Her payments, which continued until her death, are detailed on this report. The image cuts off the September 1831 payment, but the form does not show a March 1831 payment as promised in the legal decision. 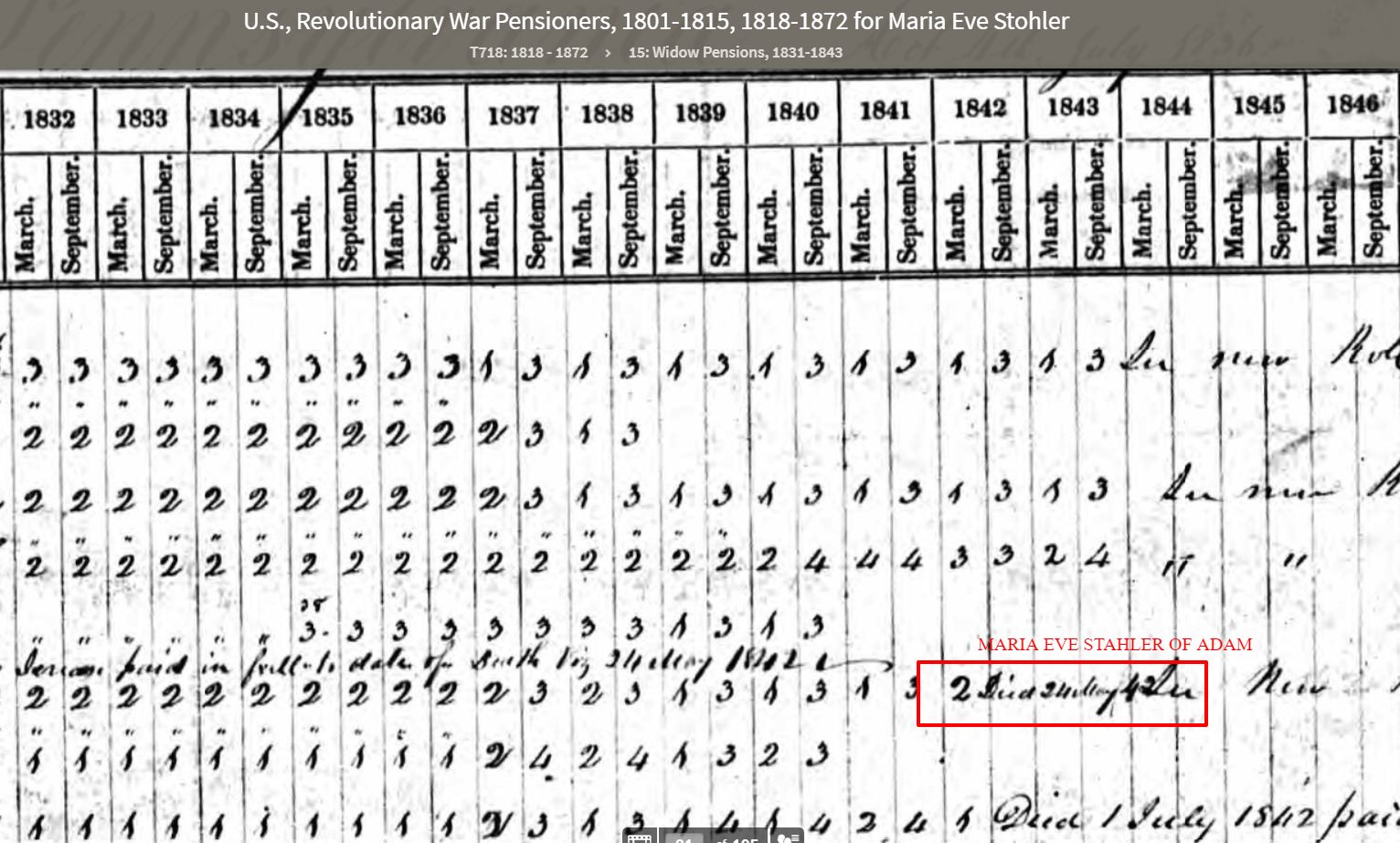 So if she was getting a widow’s pension from the time she was 83, why all the legal action? It is complicated by all those different rules in the various Revollutionary War pension acts passed by Congress.  It was not uncommon for widows or children to reapply when a more favorable act passed.

In March 1834, Eva Maria petitioned the state legislature of Pennsylvania. Because that document is very difficult to read, I am still not sure whether that is because Pennsylvania had a separate pension system for their state’s militia, or some other reason.

At any rate, the scene moves to the Office of Pensioner in January 1835 where a note on the cover page of her file notes, “no proof of poverty” indicating the law in force at that time would only give pensions to the needy. She was there to convince the Commissioner of Pensions that she was entitled to the higher amount granted to officers.

In August 1836, one month after the passage of the more generous act of 1836, she testified as to her marriage date (15 March 1768) and that she has remained a widow since her husband’s death.  Both of these are requirements to receive a pension.  She also introduced several friends and neighbors (old veterans) who testified as to her husband’s service in the Revolution.  The acts governing widows pensions generally require proof of the length of service, and whether the veteran was a commissioned officer or enlistee. Eva is depending on the testimony of these old veterans who served with her husband.

Part of page 43 in legal file, the testimony of old soldier and neighbor, George Lonenberger

This is part of a page of the testimony of George Lonenberger, who was a neighbor of the Stahlers.  It reads, in part:

“I was personally acquainted with the late Captain Adam Stahler of Northampton. I saw,was in company with and had conversation with the said Captain Stahler a few days after the Battle of Brandywine in September 1777 and said Captain Adam Stahler had the command of a company of militia fom Northampton County, Pennsylvania and the same Capt. Stahler and his company were active ________ in the Battle of Brandwine on the Pennsylvania Line and in the service of the United States.”

But then the unfortunate part–the old soldier, aged 81, truthfully reports:

So despite the closing statement, “The said Captain Adam Stahler was thought of as brave and active man and a very respectable man,” Lonenberger is not able to present proof of length of service. We find that sentence about not knowing when he entered or when he left repeated by other old soldiers who testify.

We know that Eva, and probably some of her friends, were giving testimony in German, because a translators version of her name and birth date and their marriage date is entered into testimony. However, the Justice of the Peace, or whoever took the testimony, entered the transcript of the testimony in English.  We can assume that these old farmers did not speak in legalese–“the aforesaid Captain Adam Stahler” over and over again, so some liberty was taken with their testimony.

Eva Marie continued to receive the low payment of $120 per month for her widows pension. She had not been able to prove conclusively that Adam was a Captain, or the exact length of his service in the militia. She could not plead penury and he was not injured in the war. Testimony continued to be gathered until at least 1836, and Eva was not getting any younger.

In 1842, Eva died at the age of 92, having received a widows pension payments at the low end of the scale for about ten years.

Next up,  Part Two, Christian Takes Up the Fight.