Making  assumptions about Elizabeth Stahler Kaser did not work out so well.

At the beginning of the year, I announced that I would turn my attention to my father’s line because I know far less about the ancestors on his side, than on my mother’s.

I still intend to keep the vow to concentrated on my father’s line, but I need to “bark up a new branch” because I jumped to a conclusion that has proved to be wrong.

As a visual aid, I recently printed out poster-style family trees of Harriette Anderson (Kaser) and Paul Kaser.  It vividly demonstrates why I should concentrate on my father’s side of the family.

(Please pardon the quality, but names are not important at this point.  I just want to illustrate the relative size of known ancestors at this point. 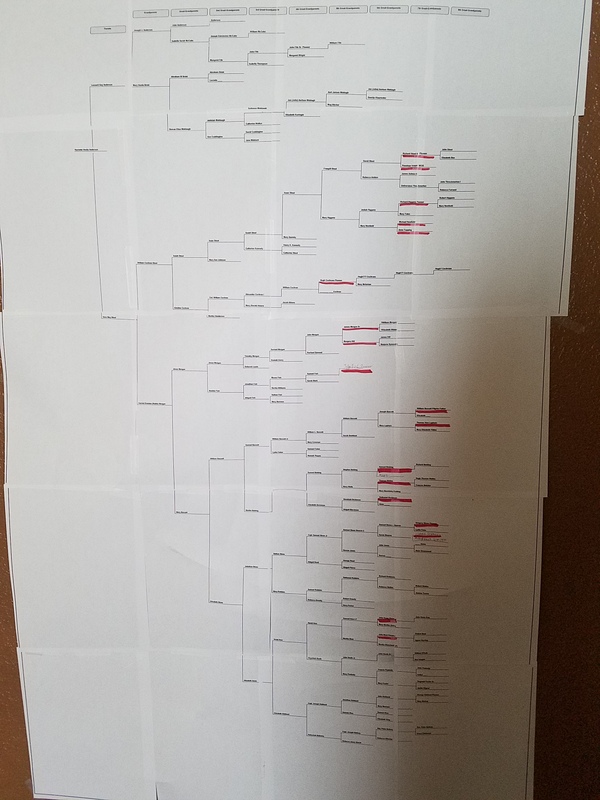 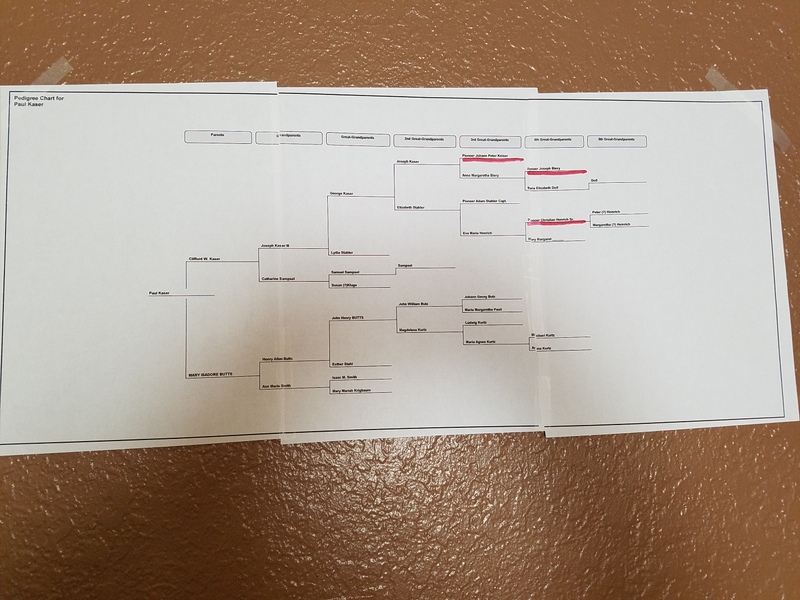 In January, I also announced that I would be starting with the known–the parents of Elizabeth Stahler Kaser who married Joseph Kaser.  Then I proceeded to spend three months researching the families of Adam Stahler and Eva Maria Henrich. I assumed they were Elizabeth’s parents.

The feeble “evidence” for most of my father’s line comes from a history about the family of Joseph Kaser. From that book, which does include some references, I determined that Joseph Kaser’s wife was Elizabeth Stahler from Pennsylvania. I wrote about Elizabeth Stahler Kaser here.  And about Joseph here.

A distant cousin who is related to my father’s maternal line, the Butts/Butz family, long ago had told me about the Goshenhoppen Register–a record of itinerant Catholic priests. The Butts family were Catholics.  The Kasers that I knew of were not.  However, she found an Elizabeth Stahler in the Goshenhoppen Register, along with her birth and baptism in 1775 and her parents, Adam Stahler and Eva Maria Henrich.  This was good new indeed, I thought. Although I did wonder at whether she changed religion just to marry Joseph, or what was happening there.

In hindsight, I should have looked for additional confirmation before proceeding down that particular rabbit hole.  But I dug up what I could, which was not much, and explored the lives of her children and Joseph’s will to help fill in some blanks.

WHY I TRUST THE GRAVESTONE

When I found her on Find a Grave–complete with a picture of her gravestone in Nashville, Ohio, it seemed strange.  I knew that Joseph and Elizabeth  Kaser had lived in Clark, Ohio, and Joseph, who died several years before she did, was buried at the Zion Reform German church in New Bedford Ohio. Many Kasers are interred at New Bedford.  However, Exploring their children’s lives and Joseph’s will points to evidence that Elizabeth spent her declining years in Nashville with her youngest son. In addition, I have no doubt that this is Joseph’s wife, Elizabeth, because their tombstones are identical in style. The same stone carver made their stones, even though they are in different parts of Holmes and adjacent Coshocton Counties in Ohio.

The tombstone says Elizabeth Kaser was born August 5, 1777–NOT 1775 as in the Catholic birth and baptism records.  Tombstones are not perfect, but in this case, I am inclined to believe the tombstone’s date.  My problem–I had found that Find a Grave reference a couple years ago.  Why did I ignore it?  Just because it was inconvenient?  I need to slow down.

WHAT I DON’T KNOW

The key to learning sometimes is realizing what you do not know.  Earlier, I assumed that the Kaser history was right about Elizabeth’s maiden name and I assumed that my distant cousin was right about her baptism and birth records in a Catholic Church register. I thought I knew those things.  Now, I have to admit that I don’t really know her parentage or her birth place.

While I looked through the Lutheran/Reform church records of Pennsylvania some time ago, I was not looking for the name Stahler, so I need to go back to those records.  It appears that they are not on line, so I will have to go to the Family History Center at an LDS church to peruse them.  If I am lucky, a marriage license will show up.[In fact, I need to stop focusing on Stahler all together.}

But what if even the Kaser history is wrong and her last name is not even Stahler?  Although I do not generally look at other people’s family trees and I never depend on them for answers, they can lead to new sources and sometimes a contact with the tree owner can be useful. So I need to contact people whose family trees show Joseph Kaser(1776) and his wife  Elizabeth.

Meanwhile, I have corrected as much as possible in the posts on Ancestors in Aprons. I have decided to let the posts I wrote about Adam Stahler, Eva Maria Henrich and Christian and Margaret Henrich stay on Ancestors in Aprons. Although I do not need information about the Stahlers and the Henrichs since they are not related to Elizabeth Kaser, there are many people out there looking for information about Stahlers and Henrichs and they might get something out of my research.

Oh yeah–just to keep things interesting, one of Joseph and Elizabeth’s sons–George, who is my great-great grandfather–also married a woman whose last name is Stahler. I am making no assumptions about her! [And in fact her name might be Stehler instead. Or something else close to Stahler. Open mind!]