William McCabe Anderson, born in Pennsylvania, knew Ohio as his home from the time he was a toddler. He probably expected nothing more from life than to grow crops and livestock and build a legacy for his own children as his father had done. Travel and adventure came to other people.

But he  became a soldier fighting for the Union at the age of twenty when he joined the 16th Ohio Volunteer Infantry.  As I wrote earlier, (follow the link for the story) Will was luckier than so many of the soldiers who fought in the Civil War. As a soldier, he saw more of the country and had more adventures than he could have dreamed of. But mostly, he was lucky because he survived.

The young man, no doubt hardy from working on his father’s Ohio farm, toughened up even more as his company marched for weeks and fought in two disastrous battles. His luck seemed to give out at the Battle of Chickasaw when he was captured and held as a prisoner of war for nearly a year.

His mother, Isabella McCabe Anderson named him for her brother William McCabe. Perhaps he inherited the toughness of his Scots-Irish McCabe forebears, along with the middle name of William McCabe Anderson. For whatever reason, Will survived when many of his fellow prisoners died from the harsh conditions in their unique prison in an old covered bridge.

In November 1864, he returned to his mother and father, John and Isabella McCabe Anderson in Monroe Township, Holmes County Ohio. It would have been a joyful reunion, tinged with sadness. Will’s oldest half-brother, Erasmus, did not survive the war, and his next oldest half-brother, John, who may have joined on the same day as Will, if so, had not yet have returned, per Ohio Soldier Grave Registration. (I have a research mystery here because of a conflict between the Grave Registration information and other reference materials. And then there are the many John Andersons from Ohio in the Union Army)

Those waiting to greet Pvt. William McCabe Anderson, besides his parents John and Isabella Anderson, included his older sister Sarah Jane Anderson McDowell, and Margaret Anderson Lisle, both now married and living nearby. Younger sisters Amy and Caroline, close as two peas in a pod, were still living at home on the farm, as were young brothers 16-year-old Joseph (to become my 2x great-grandfather) and 12-year-old Frank.

Three and a half years later, Will married Eliza Armstrong (Elizabeth J.) who lived on a neighboring farm. Her father came from Ireland, as did William’s ancestors the Andersons and the McCabes.

The Agriculture non-Population schedule of the 1870 Census of Monroe Township in Holmes County Ohio shows that Will wasted no time in establishing one of the outstanding farms of the area.  By that year, he and Eliza had two children, one-year-old Effie and two month old Olive.  William was farming a 117-acre farm, with more than half of that in “improved” fields.  The value of his farm stood at $3500.

It is clear from the schedule that he cultivated sheep rather than dairy cows, although he owned nine head of cattle and six “swine” (probably for family use).  He grew corn and winter wheat and some oats, but he sheared his sheep and sold 200 pounds of wool.  Forty bushels of potatoes and three tons of hay completed the output of the farm with an estimated value of sold products $703.

Ten years later (1880), the agricultural schedule asks slightly different questions, but we see that he estimates that his total value of the farm has risen by $2000, and total acreage reported decreased slightly, due to the loss of 27 acres of woodland and gaining ten acres of tilled land. Unlike 1870, when he appeared to do the work by himself, he now hired people over an eight week period at a cost of $100.  Will values total products sold at $400.

On the farm, he has added 100 pounds of butter to products sold, and his sheep birthed 40 lambs. He sold ten sheep and slaughtered one.  The sheep yield more than twice as much weight of wool as in 1870, and his herd of swine increased from six to twenty-one.  Poultry was not counted in 1870, but in 1880, he has 56, and has gathered 200 eggs.  His production of corn stays steady with ten acres being devoted to corn, six acres to oats, with the harvest increasing form 40 to 225 bushels and twelve acres to wheat.

Potatoes harvest stays about the same, and fruit, which wasn’t asked on the previous census seems to be an important crop. 100 apple trees and 25 peach trees take up five acres.

During this decade when farming takes most his time, life events occupy his attention as well. In 1972, his brother John, just 36 years old, dies from a fall from an apple tree on his nearby farm.

Eliza, just thirty-two when she died, left William with four young children from five to ten years old.  His mother Isabella, now a widow, moved in with him to help with the house and the children, and is listed as the housekeeper in the census taken on June 5, 1880. However Will is ready to have a second wife, and on June 24 he married Mary Jane Cox (called Jane).

Another terrible blow came to the family in 1881 when Will’s oldest daughter, Effie died at eleven.

In 1883, his brother Joseph (my  great grandfather, died (as the result of injuries suffered in a fall from a tree–like his older brother John). Despite the tragedies that struck the family, and despite his war-weakened health and hard work on the farm, William found time for civic duty. He  served both as a Township Trustee and as Treasurer of Monroe Township. 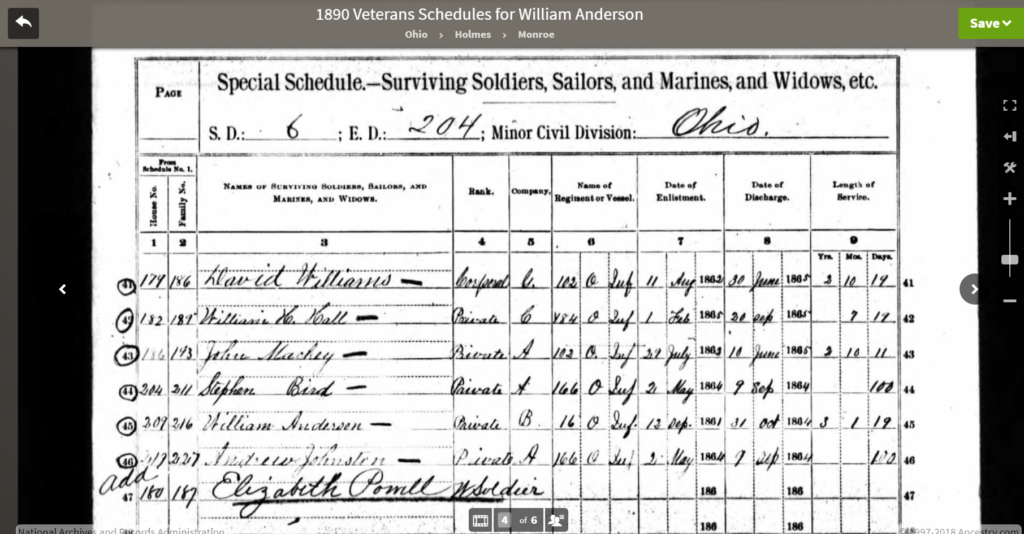 Honored at the End of Life

Will and Jane had been married for twenty-two years when he died at the age of sixty-one.  He had survived the Civil War and his time as a Prisoner of War to become a respected member of the community. The county newspaper, The Holmes County Farmer, published his obituary on June 26, 1902 on page one.

In 1985, the editor of a history of Holmes County wrote about the effect of William McCabe Anderson’s wartime experience.

“Being housed in a damp barn so weakened his lungs that he was affected the remainder of his life, a contributing factor towards his death…..His widow collected $91 monthly in a government pension stemming from his Civil War service.”