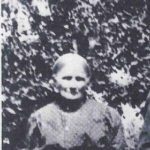 My great-grandmother Annie Smith  lived all her life in Knox County, Ohio. However, her father, Isaac Smith and mother, Mary Maria Krigbaum Smith started their family in Maryland, and Annie’s many brothers and sisters were born partly in Maryland and the rest in Ohio.

Those who lived to adulthood ( 8 out of 12, although one of those adults died at 22) nearly all made it into their 80s.

The order of birth, which is how I presented them here,  contrasts sharply with order of death.

Whereas, if we look at order of death, we find that the infant deaths occurred early and anyone who survived past the Civil War had a very good chance of reaching their 80s (with the exception of Isadore). Here is the age at death and year of death.

In this age when death in childbirth was so common, none of three women in the family who had children, died in childbirth. Mary Jane (Stevens) had the most children–eight and Annie (Butts) had six.

The family moved to Ohio definitely by the time of the birth of Susan in 1833, and perhaps two or three years earlier. The information is lacking on George’s birthplace.

The adult men were mostly farmers, the women farmer’s wives and mothers. Most stayed right in Knox County, Ohio where they grew up. Here are a few more details.

Mary Jane Smith (Stevens) 1825-1913.  Annie’s oldest sister had a very long and relatively unremarkable life as a farm wife and mother.  Born in Maryland, she married Cyrus Stevens (1821-1887) in November 1845 in Knox County.  Their children were as follows:

Jeremiah Smith (1827-1849) and destined to die young and leave no record of his life, except the family Bible. Maryland Catholic church records  show the baptism of an unknown child of Isaac and Mary Smith in May 1827.  The family Bible says he died at 22 years old.

William Jackson Smith (1828-1911), born while the family still lived in Maryland. I will write separately about William, an anomaly in several ways.

Priscilla Bell (1838) Died as an infant. (Note that the 7-year-old George died the same year).

Isadore Orilla (Critchfield) (1840-1879)  Isadore did not marry until she was in old maid territory–28 years old. Her husband, Thomas Critchfield only 24, was another farmer in Knox County.  They married in 1870.  The couple moved in next door to Thomas’ widowed mother and his two adult sisters.  After only nine years of marriage and no children, Isadore died at the age of 39.

James F. (1843-1930) Although James came of age during the Civil War, and registered for the draft in 1863 when he was twenty, he did not appear to have served. He married in 1870 and lived next door to his father, Isaac Smith.  James apparently had ambition and studied for the law. However, although he was listed as a lawyer in the 1870 census, subsequent census reports say “farmer”. By 1880, he and his wife Rebecca have a daughter Roxie, who was destined to die as a young teen.  He had no other children.  His brother William lived with him in 1910 in Howard Township, Knox County, but William died in 1911.

Rebecca and James moved into Millbrook Village, part of Danville, Ohio in their later years.  They both lived long lives, Rebecca surviving James who died in 1930 at nearly 87 years old.  I cringe when I think of the horrible death reported on this death certificate.  Starvation resulting from cancer of the face.”

Joseph Dallas Smith (1845-1933) Dallas, as he was called, led the most colorful life of all, and so I will be writing about him separately.

Rebecca (1847-1848) Unfortunately the last child born to Isaac and his wife Mary died when she was less than one year old.  My great-grandmother, Annie would have been twelve years old.  Isaac, in 1847 had reached the age of 47, and Mary was 43.

I will write more about the mother and father, Isaac and Mary (Krigbaum) Smith, who lived to 1886 and 1892 respectively, long enough to enjoy many grand-children. and great-grandchildren. That would include, potentially, my grandmother Mary “Mame” Butts (Kaser), my father’s mother who was born in 1868.