Hale’s Restaurant stood on the corner of Main and Front Streets–the main intersection of Killbuck Ohio– when I was in school in Killbuck, Ohio. Recently on a Facebook group for present and former residents of that village,contributor “Tootzi” Snyder, shared a special recipe. Claude Hale, the owner of Hale’s restaurant had given his meatloaf recipe to her. Thank you, Tootzi for setting me out on this research and cooking adventure.

[Note: That is not Claude Hale in the photo above, but a person from the Danville fire department. Ironic when you read the history of the restaurant, which I outline below]

UPDATE March 2019: Although I cheated and served French Fries instead of mashed potatoes, I did have gravy on the meatloaf I made. Somehow I knew peas and mashed potatoes and gravy had to be part of the meal. Sure enough, the husband of a high school friend of mine posted on the Killbuck group:
The first meal that I had in Hales was meatloaf with mashed potatoes and gravy. $.70
The side dishes were : Peas,prunes, head lettuce, Apple sauce. cottage cheese and garden salad. [presumably, pick two. And can you imagine prunes on a restaurant menu today? As a side dish?]

And about that “mango” in the recipe–remember it is Midwestern lingo for green pepper. Here’s a good explanation of how that word usage and confusion happened.

My grandmother and grandfather Guy and Vera Anderson (on the left in the picture at the top of the page) ran a restaurant in Killbuck, too. They started serving meals in the mid-1930’s and closed around 1945 when my grandfather began to have heart trouble. So naturally, I was curious to learn whether Hale’s restaurant came along afterwards to fill a void. Or was Hale’s a competitor to the Anderson’s Restaurant just down the street on Main? After all, I’m certain that Anderson’s also served meatloaf.

After some Googling and reading newspaper articles from the period, I can present this history of Claude Hale and his restaurant. Alas, no menus or ads featuring meatloaf.

A FIRE Reveals the History of the Building

Newspaper coverage of the fire brings the story back to my own family. A few months ago, I featured a photo of my great-great grandmother, Mary Morgan’s home on the corner of Main and Front Streets. The article on the fire includes speculation that the building was built before the turn of the century. I knew that, because my great-grandfather ‘Doc’ Stout started his first medical practice there when he married Mary’s daughter, Hattie.

Even more interesting, the article says that the building previously served as a dry goods store and a post office. That is all part of my family history. Mary Mogan’s first husband, Asahel Platt operated a dry goods store. I discovered that fact through the probate papers filed after his death. After her second husband, Jesse Morgan, disappeared from her life, Mary served from time to time as postmistress for Killbuck.

All those activities, plus her business as a seamstress, took place in the same building that later housed Hale’s restaurant. You can clearly see the similarity with the picture of Hale’s restaurant above.

So much for the history of the Hale’s Restaurant. How about a slice of restaurant meatloaf? Claude Hale’s recipe obviously serves a lot more people than you might at home. In the notes on the recipe, I tell you how easy it is to convert this to 1/3 the size.

Also, this recipe is pretty basic. If you want to try one with a little more pizazz, see my own meatloaf recipe. I believe the use of tomato paste or sauce or catsup probably derives from the Anderson’s Restaurant recipe. That’s my story and I’m sticking to it. (Although I may add more eggs to the Anderson Recipe next time, because I really liked the texture of Hale’s meatloaf. 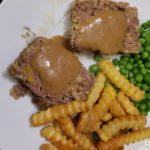 This is the full restaurant-sized recipe as written by the restaurant owner.  I made 1/3 the amount and it made an 8″ loaf pan plus a mini loaf pan. Alternatively, it would fill a 9″ loaf pan. The recipe is easy to divided in thirds.  Just remember that 1/3 a Tablespoon is 1 teaspoon, so don’t overdo the pepper. Several people on first seeing this recipe thought it was too many eggs, but I found the eggs and cracker meal balanced perfectly with the ground beef for a very good texture. You can serve it with a brown gravy (mix 3 tbsp melted butter and 3 tbsp flour, and add 1 to 1 1/2 cups beef broth depending on how thick you want the gravy.)  For an authentic mid-century restaurant meal, serve with mashed potatoes and canned peas and a lettuce salad.