As a new bride, I was reluctant to start making pies because my mother made such great pies. When I worked up the courage, I started with the American classic, Apple Pie. After all, at my Grandma’s house, the rule seemed to be that it was okay to have more than one kind of pie for dessert, as long as one of them was apple. When I baked my apple pie, I relied on my American classic cook book, Joy of Cooking.

For a long time, apple pie was about the only pie I made. I finally braved the wilds of other types of pies, and am still experimenting with new twists on old favorites. This caramel apple pie with pecan crumb topping melds the original Joy of Cooking apple pie recipe, with a technique I saw mentioned in a Facebook pie baking group. Then I borrowed the crumb topping recipe from another vintage cookbook, Better Homes and Gardens, and gave it a different twist.

The first challenge with the seemingly simple apple pie is deciding which of hundreds of kinds of apples to use. Most older cookbooks recommend Granny Smith, however, people are gravitating toward sweeter apples, and I found that Honeycrisp makes a very good pie. Just be sure to adjust your sugar depending on how sweet the apple is. Here’s a chart to help you decide.

Here is my cobbled together recipe–for two smaller pies so you have one to eat and one to share. I hope you like it. 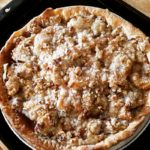 If you have very sweet apples, you can cut back on the sugar used.  If your apples are not juicy, you may want to add some water or bottled apple juice when you are boiling  down the juice. Of course, I recommend my Perfect Pie Crust, however, feel free to use whatever pie shell you prefer. The topping is the star in this pie. I specified Penzey’s Apple Pie Spice in the recipe, but if you don’t have any, you can substitute 1/2 tsp. Cinnamon; 1/4 tsp nutmeg and 1/4 tsp cardamon (if you have it on hand). The Penzey’s mix is  very nice and I have found that I use it in a lot of ways besides apple pie–other fruit pies, cinnamon/sugar toast, baked puddings, etc.

I cannot think of a more exciting announcement to make during the month of Women. As the title indicates–I can now call poet Emily Dickinson, cousin.

The Belle of Amherst and Black Cake

Of course I had known the poetry of this premier American Poet since I started reading. But my close attraction with Emily really developed when I played the role of Emily in the one-woman play, Belle of Amherst at the Invisible Theater in Tucson, Arizona. Emily’s opening lines of that play:

“This is my introduction. Black cake. My own special recipe.“

(After some digressions and introducing herself, she proceeds to share her recipe.)

“Just beat the butter and sugar together, add the nineteen eggs one at a time–now this is very important–without beating. Then beat the mixture again adding the brandy alternately with the flour, soda, spices, and salt that you’ve sifted together. Then the molasses. Now, take your five pounds of raisins, and three pounds of currants and citron, and gently sprinkle in all eight pounds–slowly now–as you stir. Bake it for three hours if you use cake pans. If you use a milk pan, as I do, you’d better leave it in the oven six or seven hours.”

Now does that remind you of anyone? Someone who loves to cook and share recipes? Although she gained fame posthumously as a poet, during her lifetime, she was well known around Amherst for her skill at baking.

You can see my modernized version of Emily’s Black Cake here. In fact, Emily’s recipe intrigued me from the first time I read the play. And while I was rehearsing, I experimented with baking the cake. Then I made some to be sold during intermissions at my performance of Belle of Amherst. I have also made her ginger bread and her coconut cake. All delicious.

My Connection to Emily Dickinson

You don’t work so long on the development of a one-woman show without feeling very close to the subject, and I certainly felt close to Emily. As I’m sure you know, she was born, lived and died in Amherst, Massachusetts, where her family had been leaders in the community and the college of Amherst. When I did that play so many years ago, I never dreamed that I had more than just the connection that comes with acting.

A few years ago, as I was tracing my great-great-etc-grandparents from New England, I came across 6th great-grandmother Elizabeth Dickinson Belding. She came from Amherst. Surely she must have been related to Emily Dickinson and her family.

The Dickinson Family seemed to be bewilderingly large and spread out over New England, and I was at that time pursuing another line of ancestors, so I set aside the notion that I might be related to Emily. But I did not forget.

Today I looked for a family tree for Emily and compared her ancestors to the ancestors of my (much earlier) 6th great-grandmother, Elizabeth Dickinson Belding and her father (my 7th great-grandfather). II only had to go back one more generation to find my connection to Emily. Here is what I found, starting with our MRCA (Most Recent Common Ancestor), Nathaniel Dickinson– my 8th great-grandfather, and Emily’s 5th great -grandfather.

You will notice that my line comes down through the women in the tree, starting with Elizabeth Dickinson, the daughter of Hezekiah Dickinson. The only exception is William Bassett (1779-1833). Emily’s line, on the other hand, follows the male Dickinson line all the way. My 7th great-grandfather is the brother of her 4th great grandfather, Samuel DIckinson (1638-1711). Samuel is my 8x great uncle.

Emily’s family started in North America in Connecticut, but for four generations before Emily, they had lived in Amherst, Massachusetts.

How appropriate that my bookworm great-great grandmother turns out to be the same generation as Emily DIckinson! And had Emily, instead of being a recluse, had been married and had children, her great-great grandchildren would be in my generation.

The conclusion? Emily Dickinson is my 6th cousin, 3 times removed. Don’t get confused by the “removed”. The three times removed simply means that once you find our MRCA you look at how many generations difference there are between that person in my line and in her line. In this case it is 8x great grandfather and 5x great grandfather–so, 3x removed.

Emily Dickinson Has a Poem For It

How better to end this little tribute to my new-found cousin than with one of her poems. This one is used as the foreword to the printed Belle of Amherst.

You can find several versions of a “Swedish Apple Pie” on the internet. Most of them look like fruit crumbles, rather than pie. This one has no bottom crust, but has a top crust that resembles a large cookie rather than pie crust. The result is a very easy, very delicious, but very ugly “pie.”

A caveat–I do not have Swedish ancestors, unless you count some stray Vikings who attacked and maybe bedded my Scottish or English distant ancestors. I do have a Swedish sister-in-law, and through her some Swedish acquaintances.

My Swedish friend tells me that she has not seen this “Swedish Apple Pie” in Sweden. They are more likely, she says, to make a dessert with oats that looks like a crumble.

Even though I constantly remind you of my Perfect Pie Crust recipe, sometimes there is a reason to use something different.

But sometimes taste wins out over authenticity, ya know? It took my husband and I about 36 hours to devour this delicious dessert–call it what you will.

In the recipe, I have included a link to the web source of the recipe that I adapted. There you can also find the recipe for traditional Swedish vanilla cream sauce, which really is Swedish, and might be served on this dessert if this were a Swedish dessert. 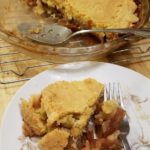 While my Swedish friend says this is not really the way that the dessert is made in Sweden–where it is more of a crumble made with oatmeal– this dessert is delicious.  If you want to make it a bit more Swedish, you can use the traditional Swedish topping, Vanilla Cream Sauce.  You can find the recipe for Vanilla Sauce where I got the basic recipe for this “pie” at That’s Some Good Cooking. I added nuts to the recipe because I thought it would up the flavor, and also perhaps improve the looks a bit. Unfortunately, I only have a picture of the original–without nuts. Note for the Minority of Us Who Do Not Have Microwave Ovens Microwaves are great for melting butter, but I do not have a microwave oven (and don’t miss it).  I have discovered an easy way to melt butter  if you have an oven that is under the range of your stove.  I turn on the oven, and then put the butter in a small pyrex dish or spare measuring cup on the top of the stove.  The butter melts from the oven heat while I am setting out ingredients, greasing the pan, peeling the apples, etc.  Of course this doesn’t work if you have a built-in wall oven. You can also put the dish with butter in the oven, but keep a close eye so it doesn’t start boiling and spattering!