Despite pledging to myself that this year I would stick to the main line of ancestors, I can never resist a mystery.  And Lucy Sutherland presented a mystery. 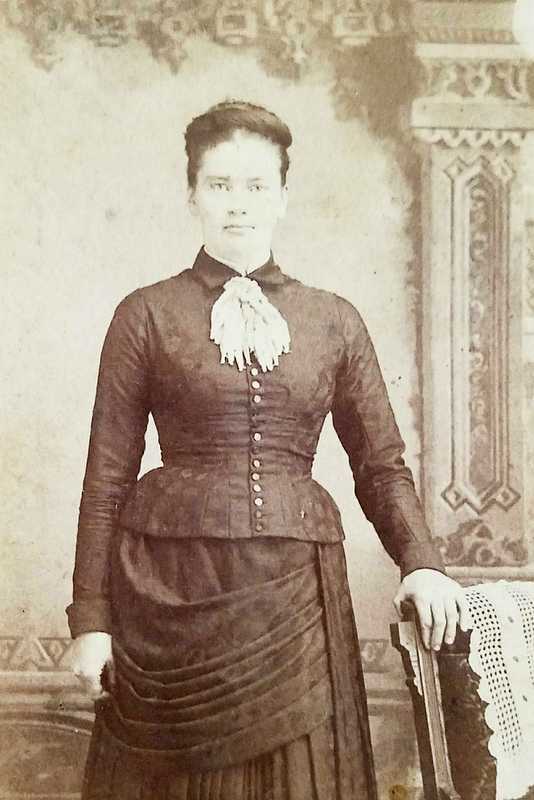 In sorting through old photographs, I came across this pretty lady.  On the back I saw it was photographed in Millersburg, Ohio, by a photographer who took many pictures of my other ancestors.  The hand-written name below the photographer’s imprint on the back was Lucy Sutherland.  At the top on the back someone had also written #4 Mrs. L. S. Fair,Clark.

Both of those surnames struck a chord.  One of my father’s aunts, Emma Kaser married a Sutherland.( I  found the story of Emma and George to be quite interesting. You can follow the link to her name if you’d like to read it.)  And my mother’s half-sister, Rhema Anderson married a Fair.  The Sutherlands, Fairs, and Kasers all lived near or in Clark, Ohio.  So how come I didn’t know Lucy Sutherland? And was she born a Sutherland or did she marry one? And why would my mother or father have her photo in their collection?

What I Knew Or Learned

The carte de visite photo looks to have been taken in the 1870s, judging by the style of the photograph and by the style of her dress.  I guessed her age as in her 20s or 30s.

I searched my family tree for Sutherlands, but Lucy was not there.  So next I turned to Fairs. Since I had not added the family of my uncle (by marriage) Earl Fair, my tree was of no help, so I emailed a Fair cousin. He consulted with his sister, who did some research and came up with the fact that Lucy Sutherland married Phineas Franklin Fair, brother of Lyman S. Fair.

That solved the question of why Mrs. L. S. Fair’s name appears on the back of the picture, and firmly places the drama in Clark, Ohio.

P.F. Fair and Lucy were married on November 4 1879, so Lucy was unmarried when she had this picture made, but it is logical to assume that it was indeed taken in the 1870s.  The two newlyweds were twenty-five years old according to their marriage license, so in the picture she was a bit younger than I had guessed–in her early twenties.

A little more digging, and some mysteries clear up, but as usual–new ones emerge.

In 1836, five-year-old Daniel Fair arrived in Ohio with his parents. He grew up and married and had several children including Phineas Franklin Fair (b. 1855) and Lyman S. Fair (B. 1866)

About 1864, the Daniel Sutherland Family, with nine-year-old Lucy Sutherland (B. 1855) and other children, including two-year-old George Sutherland (b. 1862) moved from Pennsylvania to a farm near Clark, Ohio (then called Bloomfield).

By 1879, when Lucy Sutherland married Phineas Franklin Fair they were both twenty-five years old.

The cast of characters as they show up in my family tree:

The mystery of why my parents would have her photo remains unsolved.

And the fact that Phineas Franklin married a second time in 1903 adds piquancy to the story.  Lucy pretty much seems to disappear from records after her one son is born in 1886. Find a Grave identifies a grave marker as hers and says she died in 1951 (age 96) but I can’t read the tombstone, so don’t currently have any more information from that. There also is a Lucy A. Fair on a property map of the area where P.F. Fair also has land, but most records refer to her as Lucy J.

I am going to leave it to the Fair family to sort this out if they choose, and go back to my direct line, now that I at least know my connection to the lady in the photo. Thanks for the entertaining distraction, Lucy, but I’m back in focus.

My handwriting is terrible. Some very old penmanship samples showed me just how awkward. My struggle with writing made me admire my grandmother’s Spencerian script even more. But she was not the only person with good handwriting back in her day.  If you look at the penmanship of most of the entries in the autograph books of Maude and Vera Stout, you will see many examples of children who might have studied penmanship with a master.

One day when I was visiting her, she showed me three pieces of paper with fanciful birds, drawn by pen in swooping lines of every-changing width.  I gaped. The person who created these penmanship samples was an artist. In fact, the drawings were promotional material. Advertising differed in the 1880s from today’s TV and websites. So did penmanship.

The International Association of Master Penman, etc. provides a haven for those who think penmanship counts. They introduce F. W. Tamblyn, who moved from itinerant penmanship teacher to penmanship by mail courses. If you love beautiful penmaship, you may want to givve their site a look. 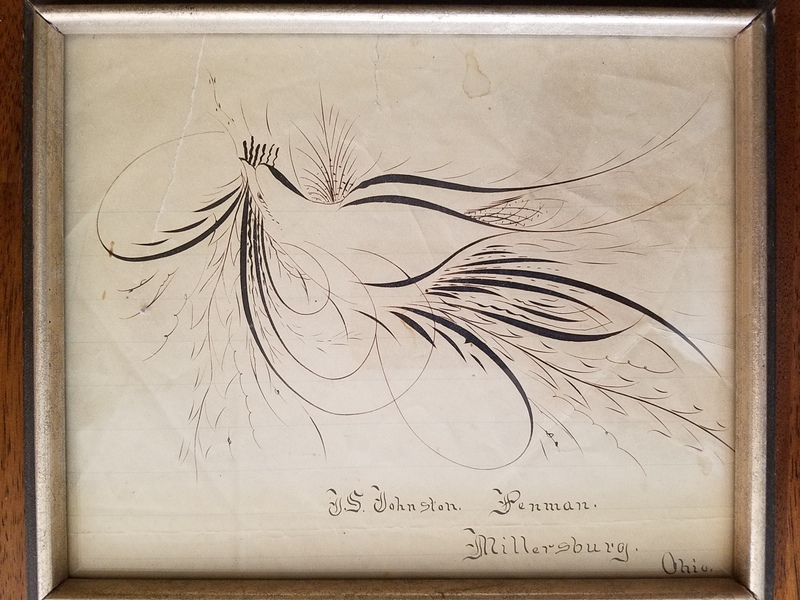 This is smaller than the other two penmanship samples, also done by J. S. Johnston of Millersburg, Ohio. Like the other two, it is on ruled paper like children used in school.

They were all signed by J. S. Johnston, Millersburg, Ohio, and two of them designated that Mr. Johnston was a Penman.  My grandmother had kept them folded in a drawer for more than sixty years.

Itinerant penmanship teachers swarmed over the countryside in the 1800s. At that time, penmanship fell under the category of vocational training.  For those of us researching court documents and old legal papers, we become familiar with the handwriting of clerks hired for their beautiful and clear penmanship.

Grandma Vera Anderson explained that the penmanship teacher would come to town (Killbuck, Ohio) and set up outdoors near the center of town, creating these awesome examples of his work and handing them out to the children who gathered around.  Of course, he really wanted the youngsters to run back home and tell their parents about the wonderful drawings and that they could sign up and take his class so they, too, could make their writing a work of art.

In this one I admire the delicate suggestion of tree limbs in the background of the top bird, and water behind the lower bird. And how beautiful that U. S. A.!

Two graceful birds in penmanship sample by J. S. Johnston of Millersburg, Ohio. Note he made an error in writing Millersburg! 7 3/4″ wide by 9 1/2″ tall.

I think of the skill needed to make these penmanship samples with a scratchy metal pen dipped again and again in a pot of ink and I get the shivers.  Even if he had never studied the concept, he was working with negative space and balancing the decorative designs around the page so that they fit into the whole.  His composition draws the eye just where he wants it.

I wonder how long it took for him to create something like the complexity of the drawing below? I can almost hear him talking to the gathered children as his hand flew across the paper. He told them how these lines form part of letters in handwriting, and wouldn’t they like to be able to do this, too?  Here, take this paper home and show your Mother and Father. I will be here all week giving lessons in penmanship. 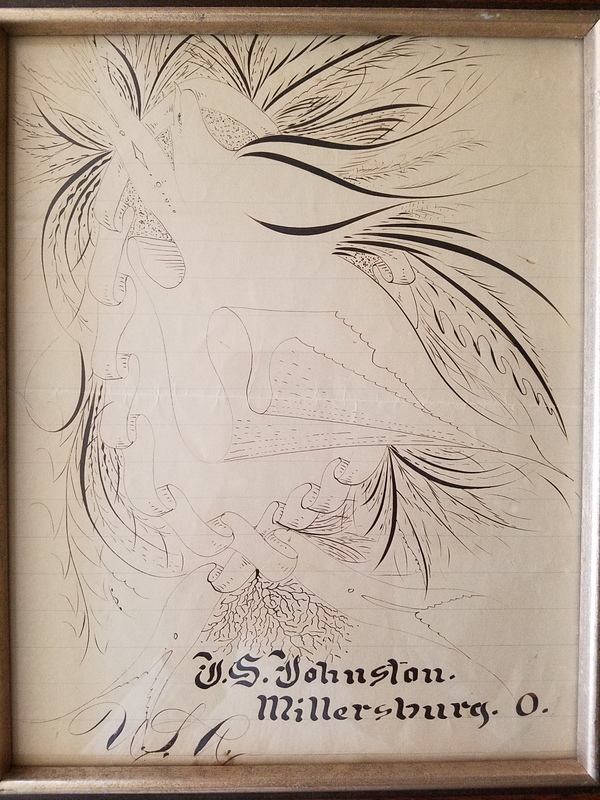 When I inherited the drawings, I framed them properly as a work of art should be framed. Now they are well over 100 years old, and protected.

I think of these examples of penmanship, and the children’s desire to write beautifully in the autograph books whenever I hear the current discussion of whether it is practical to teach script in school any more, since everybody prints or keyboards.

Poor Mr. Johnston, the penmanship teacher, would be bereft.

As I would be without these gorgeous penmanship drawings.

Note: This post is a response to the weekly prompt of the 52 Ancestors project started by Amy Johnson Crow.    This week’s prompt: Heirloom

Way back in January 2016, I showed you some pictures of my mother’s “Jazz Age” jewelry, including this bracelet–possibly wedding jewelry. (Click on that link to get a description of the bracelet.) 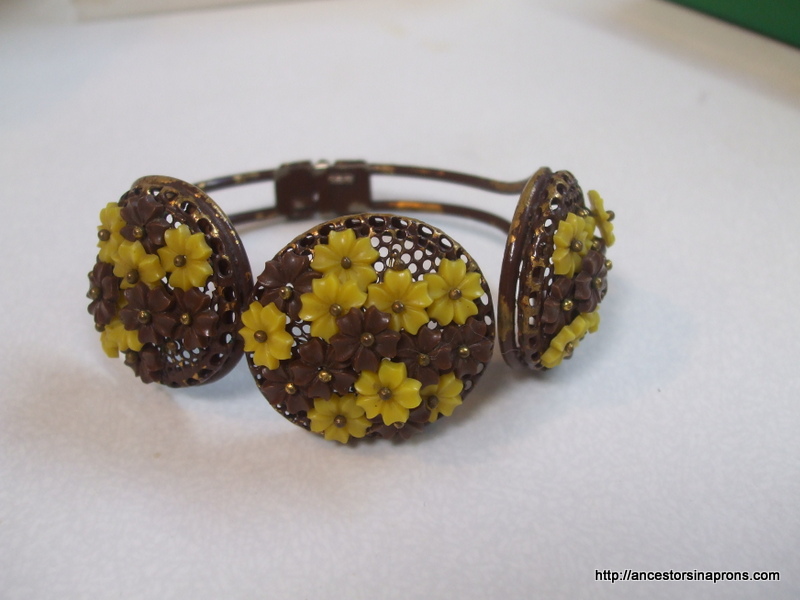 The bracelet Harriette Anderson wore the day of her wedding to Paul Kaser.

When I wrote that article, I said that I wasn’t absolutely sure that the bracelet was a part of mother’s wedding day outfit–, but I thought that she wore this unusual wedding jewelry.

Now I know!  This newspaper wedding article features a picture of my mother, Harriette Anderson Kaser, with her Matron of Honor, Lois Duncan Feight .  The wedding took place in the home of Lois and her husband Hank in Newark, Ohio.   (This article explains why no relatives attended.) 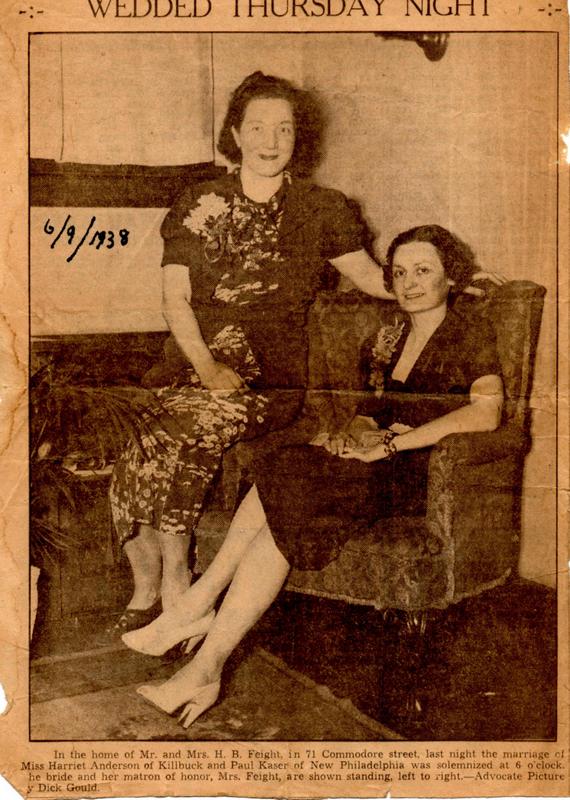 And just in case you cannot see the bracelet, here is a grainy enlargement. 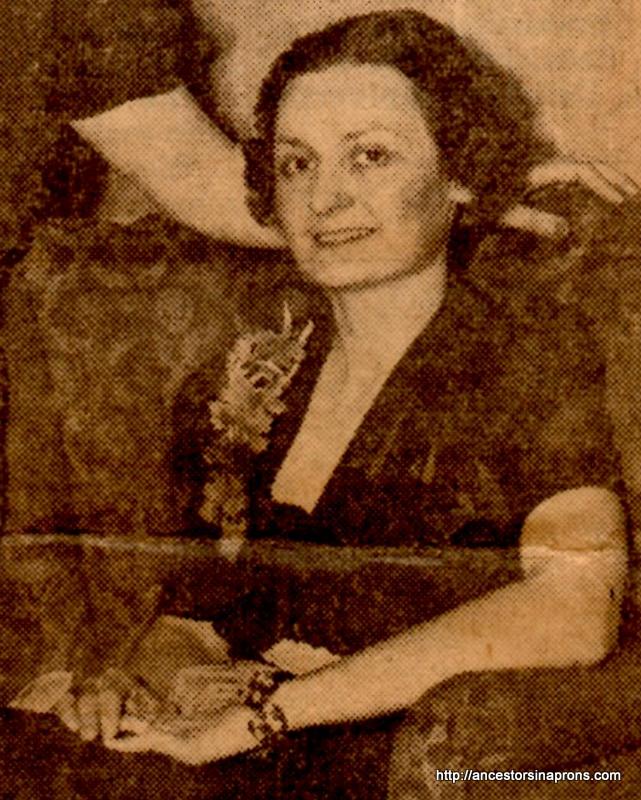 I have shared some of the letters my mother and father exchanged during the years leading up to their marriage.  In one, Mother mentions going shopping for a new dress, presumably for the wedding. It does not mention wedding jewelry, though.

I went to Coshocton tonight and bought a new dress, hat, gloves, purse and tomorrow am going to get shoes.

I couldn’t stand a chance of your looking nicer than I might. No Dear I just had the urge and saw one I liked pretty well so there was.

It is true that despite his lack of funds, Paul Kaser was a spiffy dresser, but judging by the picture above, she was keeping up with him just fine, don’t you think?

Others Blogging About Heirlooms

Jeanne Bryan Insalaco, Everyone Has a Story to Tell,  started a Family Heirloom challenge in November 2015 asking fellow bloggers to join her in telling the stories of their family heirlooms. Here are some of the bloggers who also blog about heirlooms.

Are you a blogger who writes about heirlooms (even once in a while)?  Let me know in the comment section and I’ll add your blog to this list.