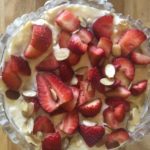 If you don’t want the history–scroll down to find the kinda sorta recipe for creamy potato soup.

I was on a soup-making binge since we had some of what passes for winter weather here in southern Arizona. The creamy potato soup is particularly well suited to cold weather when you want something filling and comfort-making. And the vegetable soup made me think of my German ancestors, for whom soup is a regular meal. Check out the German Buttermilk Potato Soup I wrote about earlier. And I thought of pioneer families who no doubt threw a lot of ingredients into the pot that was kept simmering on the fire all winter for a perennial vegetable soup.

But I also thought about my mother and grandmother and their soup-making, which as far as I experienced, consisted of opening a can. The Campbell Soup company took over soup entirely by the mid-century era when convenience was everything in the kitchen. Which sometimes meant nutrition and taste took a back seat. Not only that, but for a while every recipe seemed to call for a can of mushroom soup.

I still have a lot of those canned-soup-based recipes in my recipe box, but now I just look at them and go “Yuck!”

Even today, canned cream of tomato soup accounts for the highest quantity of any stable canned food sold in grocery stores.

They first produced canned soup in 1879. In looking at the company’s history, I learned that the co-founder with Joseph Cambell was an Abraham Anderson. (Darn! I wish I could claim I’m related to that guy through my mother’s paternal line.)

Mid Century Cookbook And the Can 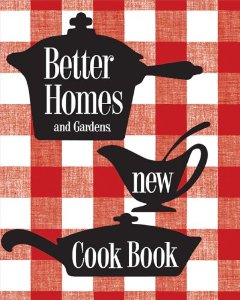 I checked Better Homes and Gardens cookbook–one of the favorites of that period. I saw that although the book does give instructions for making broth from scratch, it also instructs the homemaker to make jellied consomme by chilling a can of condensed consomme, and garnishing with lemon and parsley.

In the meager 6 pages dedicated to soup, the editors include half a column devoted to “Canned-soup combinations,” for those daring housewives who dared to go beyond merely opening a can and adding water. Be adventurous! Mix two different kinds of canned soup!

There are more, but you get the idea.

Even a couple of the “from scratch” soup recipes use a canned soup as a base.

I was so accustomed to the idea of convenience food, that I filled shelves with condensed soups for decades. Finally I woke up and read the labels. All that sodium! The lack of distinctive flavoring! I reformed and started making my own. Not only are they usually delicious, but soup serves as a great recycling tool for veggies that are about to reach their expiration date.

Hence creamy potato soup. I can’t give you an exact recipe for creamy potato soup–or for the other soups that I am going to share in this series. But I hope that will encourage you to use your own good instincts to use what you have on hand, satisfy the particular tastes of your family.

TImid? Just taste, taste, taste. When my grandson came over and made chicken noodle soup, I gave him a cup full of teaspoons, so that he could taste many times, each time using a clean spoon. Some people use a box of plastic throw-away spoons.

However you handle it–taste, taste, taste as you go along and let that suggest what needs to be added. Just remember that once you get too much of something like salt or basil, it is difficult to drown it out, so add seasonings a little at a time.

One more tip–this soup cooks quickly, not like the simmer-all-day kind of soup.

Soup –at least in my kitchen–never wants to stick to a recipe, so think of this as guidance rather than iron clad instructions.

Peel a few potatoes (3 or 4 depending on size of potato and how much soup you want to make). You can really use any kind of potatoes, but mealy baking potatoes will tend to disintegrate. Dice the potatoes Peel and slice fairly thin a carrot or two. Do the same with a stalk of celery. Chop onion if you want to include it.

Brown the carrot, celery and onion in some butter. Meanwhile, cook the potatoes briefly in water. They should resist being speared by a fork so they won’t fall apart in the rest of the cooking.

Dump the potato water (or some of it) along with the potatoes and other vegetables into a large pot and add 32 oz or so of chicken or vegetable broth. Now comes the fun part–decide how you want the soup to taste, add salt, pepper and herbs to make it a French (tarragon, for instance); Italian (mixed Italian herbs); German–include a piece of star anise in the simmering soup; Greek–oregano and lemon, etc. Smoked paprika is a great seasoning for potato soup.

Simmer just until the vegetables are gently cooked. (This doesn’t take long since everything is diced in small pieces.) At this point if you want a smooth soup instead of the bumps and lumps, use a stick blender to smooth it out. Of course you can use a regular food processor, but that means pouring hot soup back and forth, which does not sound appealing to me. I prefer to process only about half of the soup, so there are still some lumps.

Pour in a couple cups of half and half (you can use heavier cream, or stir in sour cream at the end of the process, too). Meanwhile grate a cup or two of cheddar cheese. When the soup is warm through, stir in the cheese and let it melt in.

I stored the leftover soup in the refrigerator for a few days. I purposely did not make a huge batch, because you can’t freeze it. A creamy soup like this separates in freezing. Not a pretty sight.

Put a creamy, filling, quick-cooking comfort food like Creamy Potato Soup definitely belongs on your table this winter. What seasoning will you use?

Next up: Winter Vegetable

Don’t miss the total revision of my pumpernickel bread recipe. A German favorite, this bread gave me problems when I first baked it. After several tries, I have some helpful hints so you don’t have to go through the same learning process I did.