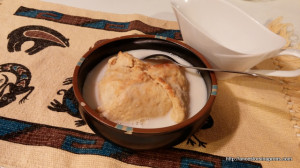 Although I combined recipes from various sources, the fact is that my mother generally used Bisquick to make the crust for the apple dumplings. Dumplings also work with the Perfect Pie Crust recipe, if you have extra on hand.

The number of apples depends on size of apples and how large you want to make your dumplings. I could have made prettier dumplings by not putting so many apple slices in each one. As it was, I had left over apple slices that I scattered in the pan.

Likewise, the amount of sugar depends on the sweetness of the apples.

The Better Homes and Gardens Cookbook suggests making a sugar/water syrup with red food coloring which is poured over before baking. The old Buffalo Evening News Cook Book from the 20s has cooks pour boiling water half way up in the pan, which would result in a soggy dumpling more like the kind in Chicken and Dumplings. Mother's dumplings were crispier than a boiled dumpling, and that's the way we like them.