Amelia Simmons broke new ground with her cookbook–American through and through. Although the 1796 book is brief–the title is not.  American Cookery, or the art of dressing viands, fish, poultry, and vegetables, and the best modes of making pastes, puffs, pies, tarts, puddings, custards, and preserves, and all kinds of cakes, from the imperial plum to plain cake: Adapted to this country, and all grades of life. 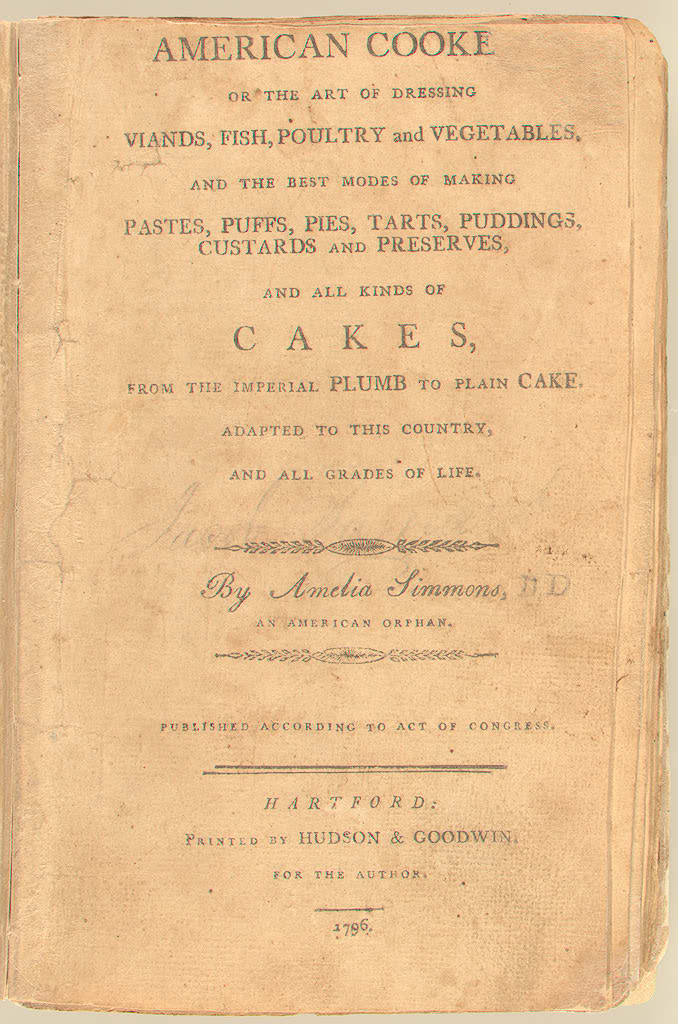 To Make a Fine Syllabub From the Cow

Sweeten a quart of cider with double refined sugar.  Grate nutmeg into it, then milk your cow into your liquid. When you have added the right quantity of milk, pour half a pint or more, in proportion to the quantity of syllabub you make, of the sweetest cream you can get all over it. 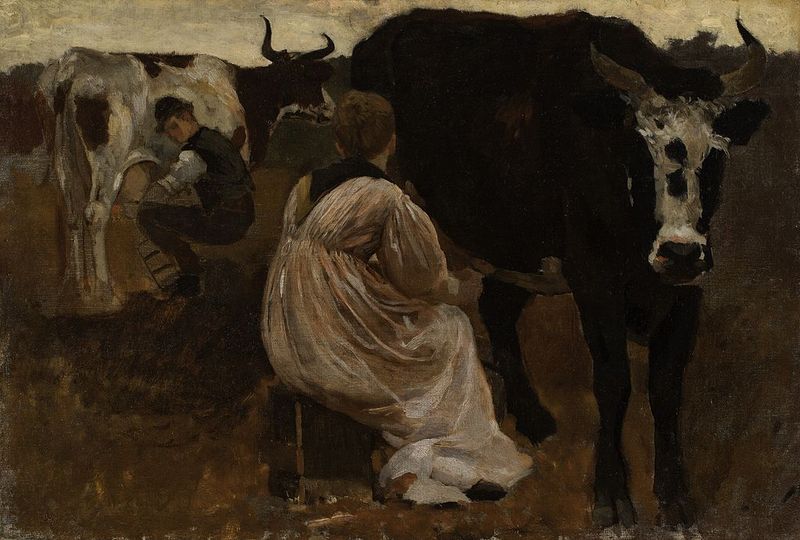 Two things struck me about Amelia Simmons cookbook the first time I looked at it.  One was the incredible effort that our great-great-great grandmothers had to put into cooking.  So many ingredients and tools that we take for granted were not available to them.  The second thing that struck me was the delightful first section on purchasing foods, including meat.

Getting a Rise Out of Flour

I won’t try to catalog all the various difficulties that our XX-great grandmothers went through ( we have discussed the problem of cooking in a wood fired oven before, for instance).  Let’s just focus on leavening. She could not buy baking soda or packaged yeast in the store, and baking powder hit the store shelves nearly one hundred years after the Revolutionary War, baking light cakes or high-rising bread caused much extra work.

In Martha Washington’s time, for instance, you had to find mechanical means to incorporate air into products and use LOTS of eggs.  Amelia advises that you beat sugar and butter together for half an hour, and the recipes in her cookbook assume you own a lot of productive laying hens.

However, the pioneer and colonial housewives experimented with other means of getting the fine cakes and breads they wanted.  They made ale, and knew that the leavings from that process contained yeast that could also be used in bread.  And they used saleratus, a crude substitute for baking soda.

The process for making saleratus was complex and the effort resulted in a powder whose strength could not be exactly calculated and was easily contaminated. Since acid needed to balance the saleratus, you will see a lot of use of buttermilk. That explains why Amelia Simmons adds wine to practically everything she cooks and bakes. Unlike her predecessor English cookbooks she doesn’t specify the type of wine, because she is not using wine for flavoring. She is using it for leavening.

The use of pearlash seemed somewhat simpler, since our great-grandmothers were already making soap and using pearlash for that.  This article explains the making of pearlash.  Amelia Simmons uses pearlash in many of the recipes in her cookbook for leavening. (I could make those recipes by substituting 2 teaspoons of baking soda for one teaspoon of pearlash.)

When you understand this ingredient being used, you can understand the striking use of quantities of caraway seed in so many recipes.  Pearlash, being ash, had a smoky taste.  Caraway seed helped cover that taste.

Amelia Simmons also used “emptins” in her recipes.  The word is a colloquial version of “emptyings,” the dregs of the wine or cider or beer barrels that is used by housewives for yeast, and she includes a recipe for emptins, which, like sourdough, requires some already fermented emptins to get it started. (I was unable to find a surefire way to substitute for this liquid yeast.)

As much as I enjoy the shopping section, I sympathize with Amelia, who having little education, put herself in the hands of someone else to assemble and manage the printing of the book. In the second printing, she included an insert railing at the changes made by the unknown editor of the first printing, including omitting flour for thickening puddings and doubling the amount of “emptins” needed for a cake.

For some details, read this excellent article. A revelation about the section on purchasing and other changes in issue one from Atlantic Magazine.

Today, the synopses of the book that you find generally do not recognize the adulteration of her original edition, and I was unable to find the second printing available in reprint. American Heritage Magazine article, apparently unaware of the fact that Simmons was not the author of the “shopping” section, contains other interesting insights.  So the errors carry on, and give us cause to be wary when trying her recipes.

Nevertheless, the shopping section is a delight to read. Sorry, Amelia.

A Recipe from Amelia Simmon’s Cookbook 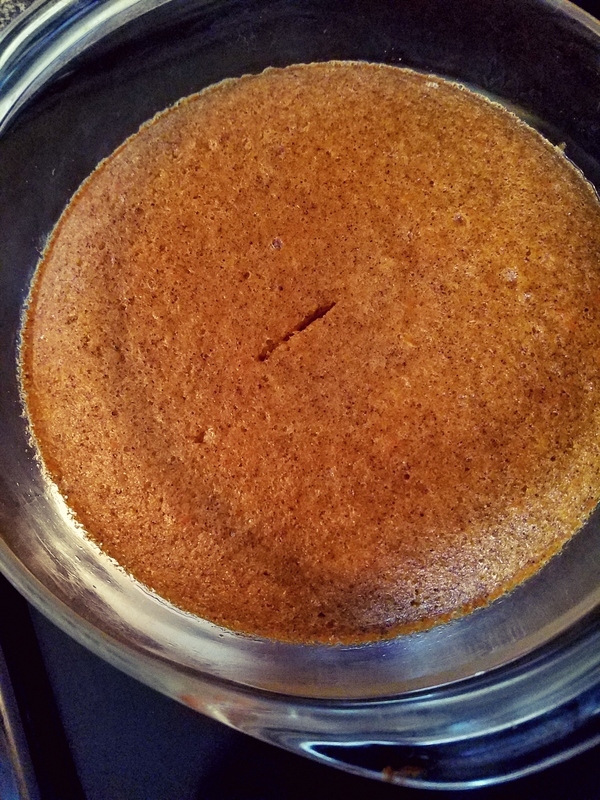 Not having any emptins lying around, and not having a cow to milk into my syllabub, I found some limitations as to what I could cook from this book. Fortunately, the puddings are simple. (Provided they aren’t spoiled by the above mentioned omission of flour.) So I chose Carrot Pudding.  Here is her recipe in its entirety.

A coffee cup full of boiled and strained carrots, 5 eggs, 2 ounces sugar and butter each, cinnamon and rosewater to your taste.  Bake in a deep dish without paste.

Without paste means it is not a pie filling–no pastry. (Although I don’t see why you could not put this into a crust. Now THAT would be something new on your table–Carrot Pie. And here is my adaptation. 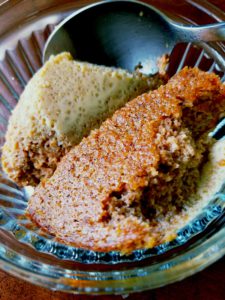 America's first cookbook by Amelia Simmons presents this simple pudding recipe, a good way to get veggies into the non-veggie eaters in your family.

I used a 1 and 1/2 quart pyrex bowl. The bowl is 7 1/2 " in diameter and the pudding was about two inches deep in the center. It turns out that I could have used a smaller bowl. I imagine if the pudding is deeper, it might need to bake slightly longer.

Although Amelia did not suggest a water bath for baking, I am used to placing a pudding bowl (rice pudding or pumpkin pudding) into a larger shallow pan with hot water, so I did that here. I wasn't concerned with the water coming up the sides of the bowl, just adding enough water to create a moist environment in the oven.

The pudding is very liquid when you mix it, but don't worry, all those eggs will solidify it.

You can also see from the picture that this pudding is a good deal more grainy than silky.

Last week, I started this series of tributes to women who wrote cookbooks because I believe they were hugely influential in the lives of our ancestors. If you want to see the first tribute and the list of outstanding cookbook authors, here’s the link.

And for THE REST of the story on leavening, you can always delve into a whole book on Baking Powder Wars: The Cutthroat Food Fight that Revolutionized Cooking by Linda Civitello. (Available in ebook form at Google Books for $9.99).

Or watch the series of videos about leavening at https://youtu.be/w_ozzlKJivA, the wonderful Townsend web and You Tube sites that tell all about Colonial cooking.