In his latest letter home from the front, Union soldier Erasmus Anderson  complains, “we are miserable fed.”  Perhaps a common soldier complaint through the ages, but he is very specific after he talks about the foods that are available for sale, including peaches that cost $1.50 for less than a quart. (Approximately $19 in today’s dollars). 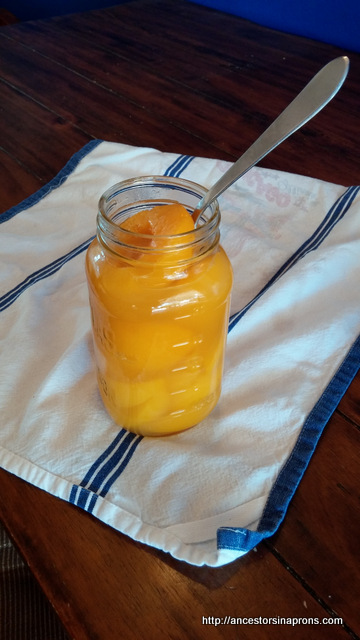 “save me a can of peaches”

Oh, I often dream I am at home getting something good to eat, just anything except fat pork and crackers would be so good.  I want you to save me a can of peaches and all I ask is to get home to eat them.

Although, I imagine that Erasmus would have been happy with a jar of peaches and a spoon, I was curious about what other ways Suzi might have prepared his peaches.  Of course there is peach pie. Peach Melba was yet to be invented by Escoffier, but housewives were preserving peaches in brandy or pickling them (Spiced peaches) in sugar, vinegar, stick cinnamon and cloves. 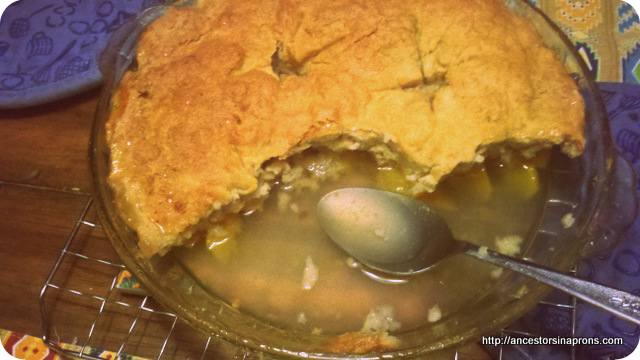 But I could not resist a recipe in one of my vintage cookbooks for a slightly different take on cobbler from last week’s cherry cobbler. And with only a small tweak (adding butter and cinnamon, and subtracting some of the sugar) the Peach Cobbler was absolutely delicious.

But then, so is a jar of peaches eaten with a spoon! 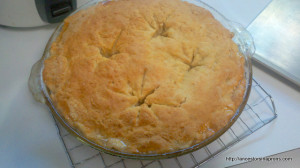 These old fashioned recipes tend to call for far more sugar than I would use. The original called for 2 cups sugar, and I reduced it to 1 1/2, although I probably would go further to 1 cup. And I would not serve the shortcake with more sugar, although I might brush the crust with milk and sprinkle lightly with sugar.

The butter and cinnamon are my own addition.

I made this in a deep Pyrex pie pan.

I recommend setting the cobbler pan on a cookie sheet in the oven, particularly if the peaches are particularly juicy.