I am taking a short break from writing stories about ancestors, as I get into some thorny thickets of research, but meanwhile, we still have to EAT! So how about a German apple dessert?

Since I’m mostly looking at German immigrant ancestors right now, I checked out a German cook book for some inspiration. I had downloaded —The German Cookbook: A complete Guide to Mastering Authentic German Cooking by Mimi Sheraton –to my Kindle. (It is also available in print editions.)

One of the reasons I chose this book is that it has lengthy introductions to each chapter, filling you in one what Germans eat, or what they ate in the past, and Sheraton emphasizes the regional nature of recipes.  Thus I can look for the Bavarian dishes that would have been prepared by most of my German ancestors, or wander farther afield. 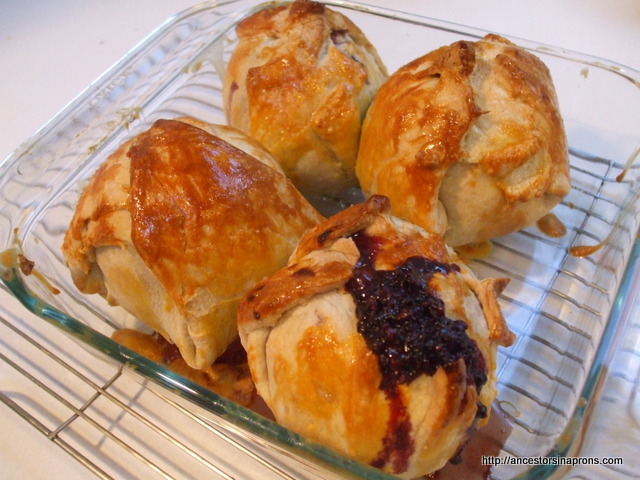 Apples in Nightgowns, a Greman dessert

I had a bag of apples that needed to be used up, and I wanted a German apple dessert that is a little different than my favorite apple dumplings.  Under baked German desserts I came across the title Apples in Nightgowns (Äpfel im Schlafrock) Now who could resist a dish with such a cozy name?

Unfortunately, I did not have marmalade, so as you can see above, I used a blackberry jam instead, adding some lemon juice to increase the tanginess.  I think I’d prefer the marmalade version, but there is nothing wrong with using any jelly, jam or preserves you have on hand.

My other divergence was in the size of the apples.  Mine were larger than she probably intended, so I made only four. 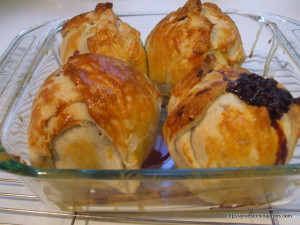 A German apple dessert with a novel name, Apples in Nightgowns, is a new take on apple dumplings.

Sheraton recommends either egg white or milk to seal the packets, but I used the egg white, since the egg yolk was going to glaze the packets.

Get as fancy or plain as you wish with wrapping the apples. The squares I cut were about 7 inches on each side. I would recommend testing the size of dough you need on one apple, and then measuring the rest of the pieces to the same dimensions.

With larger apples it took 45 minutes in the 2nd phase of the baking (after the initial ten minutes).