In June, 1933, Alanson Platt/Lanson visited his brother Asahel Platt in Killbuck, Ohio.  Alanson was a farmer who lived near Attica, New York at the time. In August, he wrote to Asahel worrying about the fact he had not heard from him. (See the story of Asahel Platt and his relationship to our family here.)  Asahel was the first husband of my 2x great-grandmother. 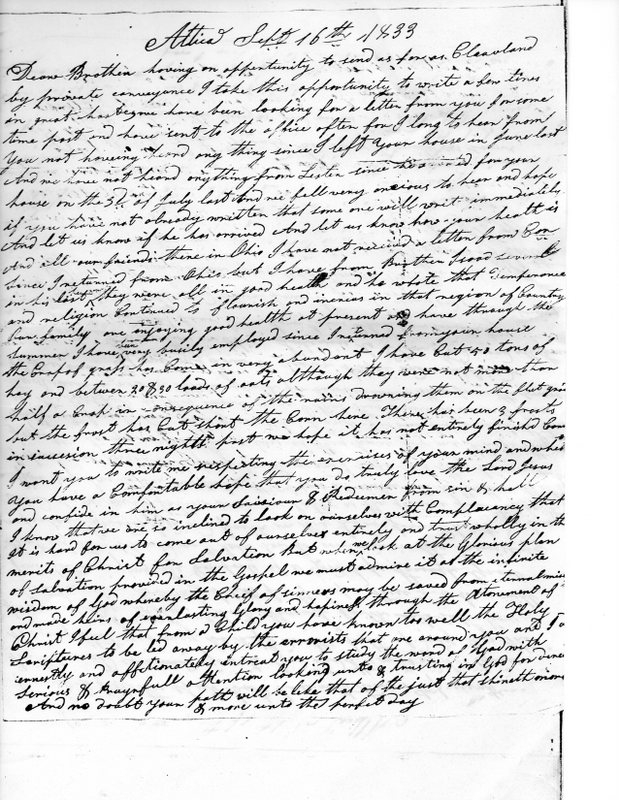 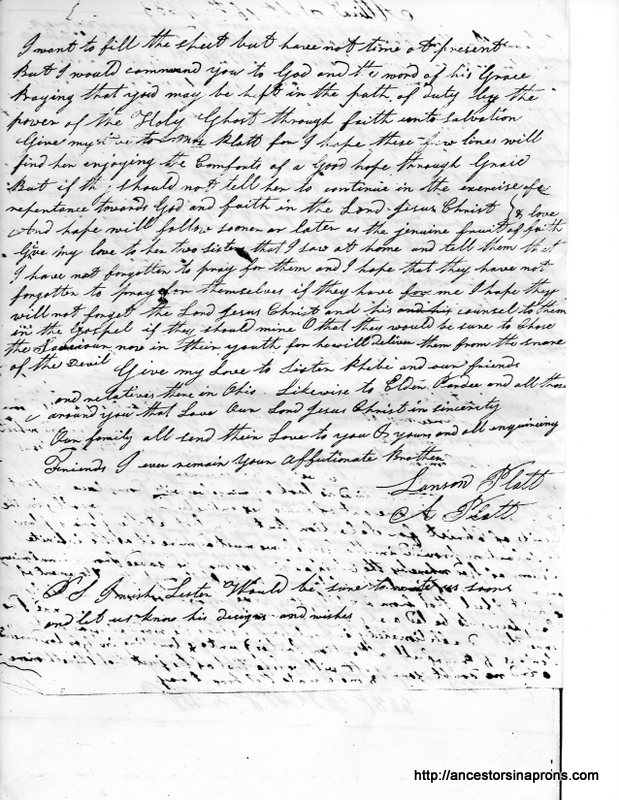 Alanson had good handwriting, and was obviously educated, particularly in religion.  He spells well given that spelling was flexible to say the least in the era, and has the customary fancy handwriting.

Asahel might have been seriously ill. That is hinted at in the letter and in fact, he died in November, two months after the letter was written.

Alanson Platt wrote the letter September 13, 1833 and it was postmarked in Elyria, Ohio (near Cleveland) on September 16 to be directed to the post office in Millersburg, Ohio. Oxford/Killbuck did not yet have a post office.  From Elyria  it would have taken another three days or so to reach Millersburg, Ohio 14 miles from Killbuck.  I wonder if Asahel was well enough to read the letter, which was meant to solve perceived problems in his spiritual life. Presumably  Alanson feared Asahel would soon meet his Maker.

The letter comes in three main parts: Inquiring about the family and complaining about not getting mail; description of farm activities; concern for the soul of Asahel Platt.  In the following introduction, my  notes are in italics.

Alanson Platt writes from Attica New York to his brother Asahel who is in Killbuck, Ohio. They were both born in Connecticut, but Alanson has lived in Attica for a year. He will later move to Ohio and is buried in Oberlin. Alanson is at least one year younger than Asahel. Asahel died in Killbuck in November 1833 at the age of 42, approximately 2 months after this letter was written.

I have inserted periods at the end of sentences and a few commas, as Alanson used no capitalization at the beginning of sentences, and no punctuation. He does capitalize words randomly (or if considered important) as they did in early 19th century.

What is all this about sending as far as Cleveland by private conveyance, and filling up the paper? Until 1846, postal rates were based on sheets of paper rather than ounces, so a frugal person would fill up both sides of one sheet of paper for a bargain, which is what Alanson did. In addition to sheets of paper there were zones–so many miles meant so much postage.  Attica to Milersburg would have been 18 1/2 cents, whereas Cleveland to Millersburg would only be 10 cents–half as much!

Dear Brother, having an opportunity to send as far as Cleavland (sic) by private conveyance, I take this opportunity to write a few lines in great haste. [We] have been looking for a letter from you for some time past and have sent to the office often for I long to hear from you not having heard anything since I left your house in June last And we have not heard anything from Lester [Alanson’s son] since he started for your house on the 3rd of July last and we feel very anxious to hear and hope if you have not already written that some one will write immediately And let us know if he has arrived. And let us know how your health is and all our friends there in Ohio.

Temperance and religion continued to flourish and increase

I have not received a letter from Csn [cousin] since I returned from Ohio but I have from brother Isaac several. [I]n his last report they were all in good health and he wrote that Temperance and religion continued to flourish and increase in that region of Country.

A Farmer’s Lament About Weather

[O]ur family are enjoying good health at present and have through the summer. I have been very busily employed since I returned from your house. the crop of grass has come in very abundant. I have but 50 tons of hay and between 20/30 loads of oats although they were not more than half a crop in consequence of the rains Mowing them on the flat ground, but the frost has cut short the corn here. [T]here has been 3 frosts in succession three nights past. we hope it has not entirely finished corn.

I want you to write me respecting the exercises(?) of your mind and whether you have a Comfortable hope that you do truly love the Lord Jesus and confide in him as your Saviour & Redeemer from sin & hell. I know that we are so inclined to look on ourselves with Complacency, that it is hard for us to come out of ourselves entirely and trust wholly in the merits of Christ for Salvation. But when we look at the Glorious plan of salvation provided in the Gospel we must admire it as the infinite wisdom of God whereby the Chief of sinners may be saved from eternal misery and make(?) him of everlasting Glory and hapiness (sic) through the atonement of Christ. I feel that from a Child you have known too well the Holy Scriptures to be led away by the errorists that are around you and I earnestly and affectionately intreat (sic) you to study the word of God with Serious & Prayerfull (sic) attention looking into and trusting in God for direction(?) and no doubt your faith will be like that of the just that shineth more and more unto that Happiest Day.

I want to fill the sheet but have not time at present But I would commend you to God and the word(?) of his Grace, Praying that you may be led in the path of Duty by the power of the Holy Ghost through faith unto salvation. Give my ____to Mrs. Platt for I hope these few lines will find her enjoying the Comforts of a Good hope through Grace. But if they should not, tell her to continue in the exercise of repentance towards God and faith in the Lord Jesus Christ and hope will follow sooner or later as the jenuine (sic) fruit & love of faith.

Give my love to her two sisters that I saw at home and tell them that I have not forgotten to pray for them and I hope that they have not forgotten to pray for themselves if they have for me. I hope they will not forget the Lord Jesus Christ and his counsel to them in the Gospel if they should mine. O that they would be sure to ____the Saviour now in their youth for he will deliver them from the snare of the Devil.

[Mary Bassett had four sisters. The two he saw in Ohio were probably Martha Bassett Smith and Eliza Bassett Emerson, both of whom continued to live in Keene, Ohio. I have a portrait of Eliza]

Give my Love to Sister Phebe, [Their sister who lived in Mill Creek Township, Coshocton County, Ohio] and our friends and relatives there in Ohio. Likewise to Eldon Pendee(?) and all those around you that Love our Lord Jesus Christ in sincerity.

[O]ur family all send their Love to you and your and all inquiring Friends.

I ever remain your affectionate brother,

P.S. I wish Lester Would be sure to write us soon and let us know his designs and wishes.

Note: Alanson had good reason to be concerned about Lester. He seemed to be quite the adventurer. He went from New York to Ohio and then struck out for Nebraska Territory where he was a farmer and an Indian Agent and started a school for his and his brother-in-law’s children as well as Pawnee children. The story I read covers the 40s into the early 60s of their lives. The two families lived in a Pawnee Village that was frequently raided by Sioux. After about twenty years, and being replaced by an Indian Agent who was an alcoholic (the Platts were Temperance and anti-Slavery advocates), Lester and his wife finally gave up and moved into a small town in Iowa.