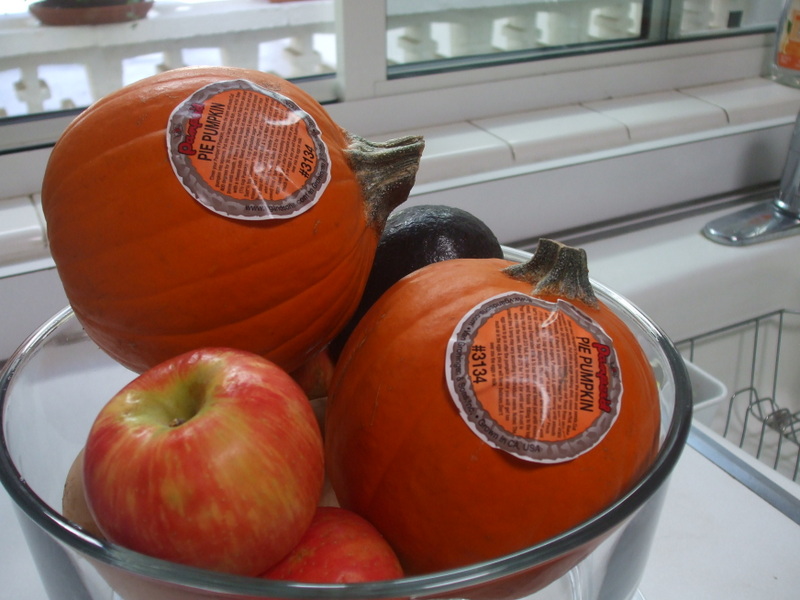 Our pioneer grandmothers cooked a lot of pumpkins before they could get their proper gardens going.  Do you suppose they ever got bored with plain slices of pumpkin or mashed pumpkin?

I have been experimenting with some of those cute little pie pumpkins, and decided to share with you two stuffed pumpkin recipes, although the directions are pretty vague.  You may have tried out the macaroni baked in a pie pumpkin, but if you did not, you might want to look back there for more info on pie pumpkins and how they differ from the Jack-o-Lantern pumpkins.

Not only did I make stuffed pumpkins, I  also baked a couple of the pie pumpkins and scoop out the meat, which I pureed with my hand blender. I used the puree in cookies (recipe coming soon) and waffles.

Now that you understand the benefits of pie pumpkins–here we go with two other ideas for using the pie pumpkins for stuffed pumpkin dishes.

My savory stuffed pumpkins started with a box of Baby Bella Mushrooms. I only needed seven for one pumpkin. 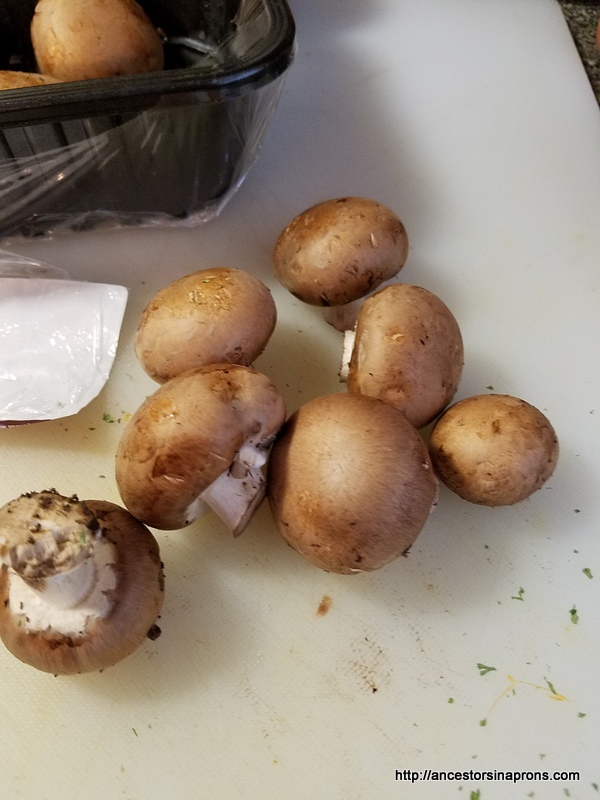 After buttering the inside of the pumpkins, I chopped the mushrooms and added a little salt, a little thyme and a lot of parsley. 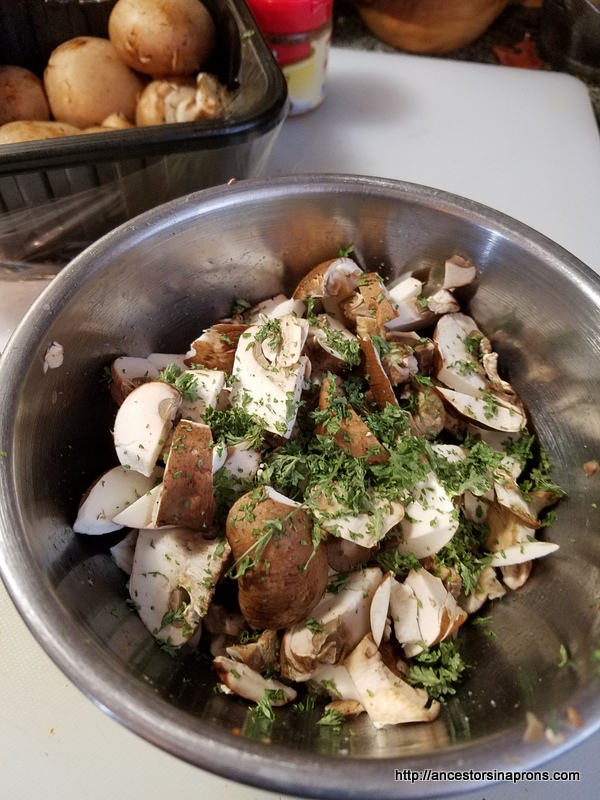 Next, I cut the tops off the pie pumpkins, the same way I would if making a Jack-o-lantern.  Then I scooped out the seeds and stringiest part of the interior. [Note: this is the only hard part of these recipes.  Some people keep the seeds and roast them.  Personally, I don’t want to keep finding the stringy stuff connected to the seeds. If you have found an easy way to clean the seeds, please let me know!]

After I loosely packed the mushrooms into the pumpkin shell, I poured in about 1/3 cup of half and half. Then it occurred to me that a bit of cheese would be good, so I added what I had on time–a slice of mozzarella. [NOTE: BAD CHOICE.  Next time I will use a more melty cheese like Gouda or maybe goat cheese.] I topped the pumpkin/cheese stuffed pumpkin with the “lid”. 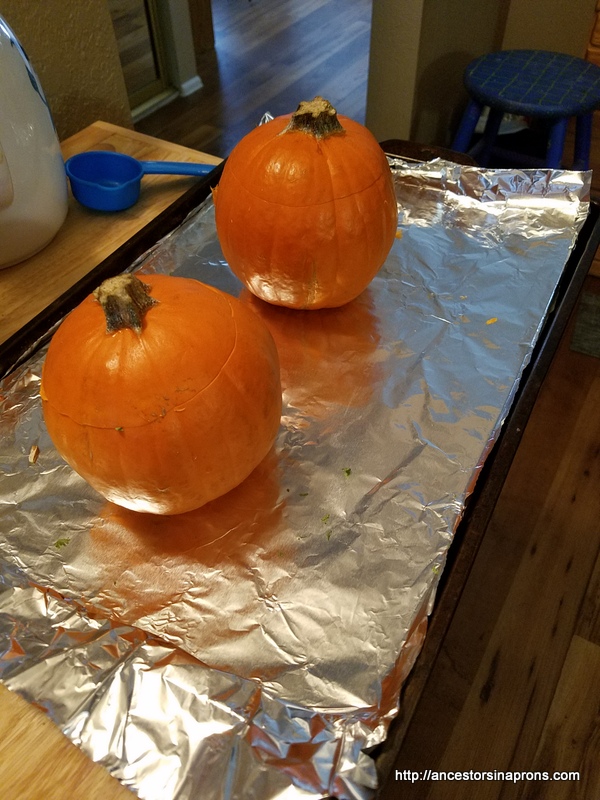 After baking on a foil-lined cookie sheet at 375 degrees for about 45 minutes, it looked like this. (Time will vary. Check by sticking a fork into the meat of the pumpkin. When it goes in easily, the pumpkin is done.) 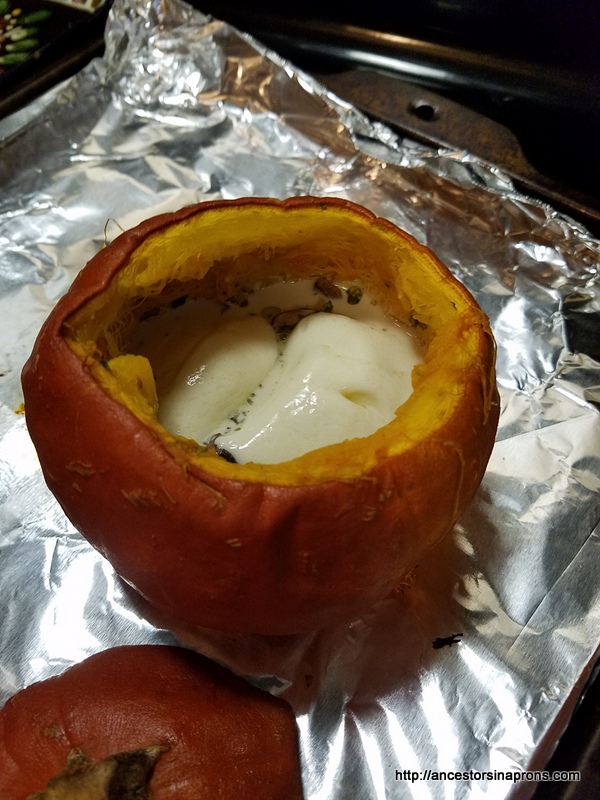 Next, I decided to use up a single large apple I had in the refrigerator.  I chopped it and mixed with a little brown sugar, some cinnamon and nutmeg. It went into another pumpkin that I had hollowed out and smeared on the inside with some butter. 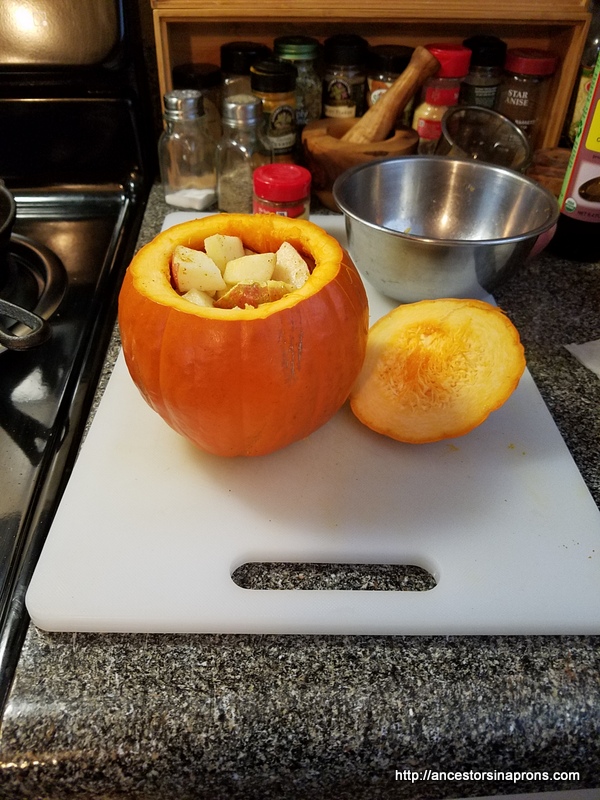 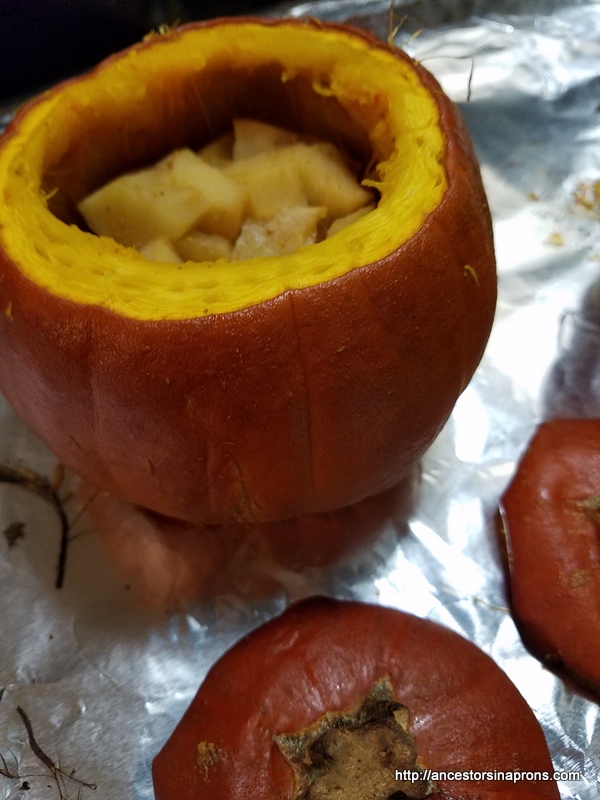 Both of these dishes turned out pretty well, but don’t make my mistakes:

Mistake number one:  I let the pumpkins sit on the shelf too long before I baked them, and they got stringier than they should have been.  Use them when they are fresh as possible.

Mistake number two:  As mentioned above–use a melty cheese on top of the mushrooms.

One more warning–you must have mushroom fans in your family if you serve the savory version of stuffed pumpkin.  This is all about mushrooms!!

I confess this is not a vintage or historic recipe, however, I can imagine grandmothers actually baking apples in pumpkins, since they relied so much on pumpkins in the frontier. Plus I mentioned once before a pumpkin-apple pie recipe so we know that combination would be one that earlier ancestors in aprons would have used.