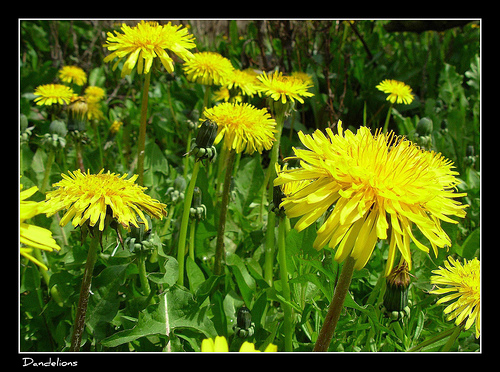 I remember the delightful taste of my Grandmother Vera’s sweet and sour dandelion greens. She would dig them from her lawn, chop off the root, wash them off and cook them in some bacon grease with sugar and vinegar. BACON! Wouldn’t Grandma love the fact that bacon has become the trendy food of the decade?

Since we don’t have dandelion-studded lawns in Tucson, I had been deprived of this treat for a very long time.  So when I found some dandelion greens on sale at the grocery store a year or so ago, I pounced.  I cooked them the way I thought Grandma cooked them. I even wrote about it and shared a recipe here.  But the truth is they were BITTER.

Why did I share the recipe? I was hoping that you might have fresher, younger leaves and it might work out better. I’ve learned that is not necessarily true. It is true, however, that good greens must be picked before they flower. As pretty as those dandelions are in the picture–you don’t want those flowers if you’re cultivating a green lawn OR if you are planning to cook the greens. 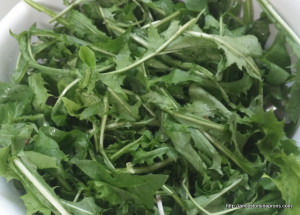 A bunch of Dandelion Greens from the Farmer’s Market

I’m not giving up.  Last week at the farmer’s market, I found some more dandelion greens on offer. I knew they were organic–never touched by icky chemical sprays–and they looked fresh and green.  So I went in search of a way to cook them that would taste like grandma’s.

Billy Joe Tatum’s Wild Foods Cookbook & Field Guide, has a sensible recipe for parboiling the greens and then eating them with butter, pretty much the way you cook most greens.  But where’s the Bacon? Parboiling takes  away the bitterness, although it probably loses some of the great nutrients found in dandelion greens. You can get the lowdown on all the good things in dandelions here.

So then I checked on line and found some recipes for wilted dandelion greens with bacon  that sounded a lot more like Grandma’s. They did not parboil the greens first, which worried me, because I didn’t want that bitterness that I experienced the first time I tried to cook them. So I decided to combine the two techniques.

Remember that a large bunch of greens is going to cook way down.  From this to this: 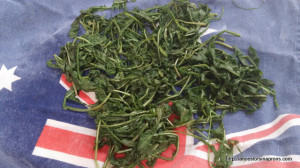 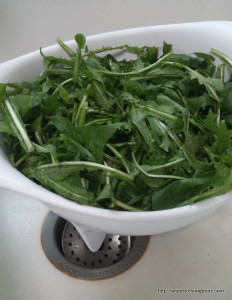 I found several recipes on line, and combined ideas, but the closest to Grandma’s, I think, was at Prevention.com [unfortunately they have apparently removed the recipe]. I adapted it and here’s the result. 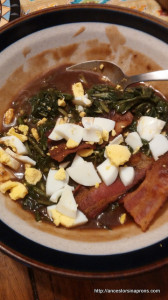 Unfortunately, we can't generally just go out and pick dandelions along the road or even in our front lawn any more for fear of chemical sprays. Be sure you are getting organic dandelion greens.

I'm not kidding about repeated washings and picking over of the greens. After washing three times and boiling twice I STILL found grass blades and a dandelion bud. Don't rush the process.

Don't worry if you taste a leaf after boiling and it still tastes bitter. The sauce is going to cure that. PLUS I discovered that more of the bitterness dissipated after leaving the leftovers in the refrigerator for a day, so if you are very sensitive to bitter taste, you may want to refrigerate and eat this cold instead of hot.

The sauce in the picture is brown because I used Balsamic vinegar. If you use cider vinegar you'll get a lighter sauce.