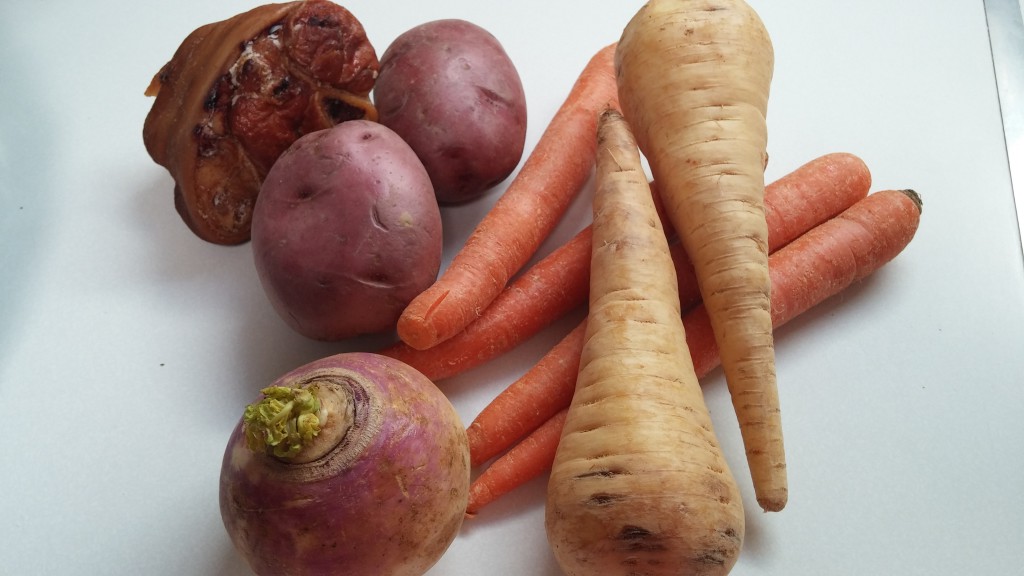 Same vegetables as in my root stew–substituting beef for the ham hock.

Beef stew is such a fundamental and flexible dish that I was pretty sure that the Civil War Soldiers would have eaten many versions of it. However, I recently came across a book that was published in 1862 by the Government Printing Office to give instructions to Union soldiers in the field. It includes a recipe for beef stew.

Note: Camp FIres and Camp Cooking: Culinary Hints for the Soldier is available in digital form at Google Books. 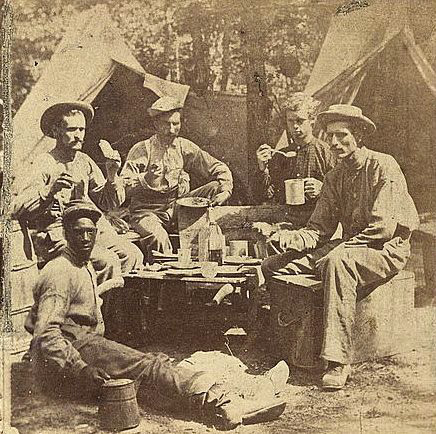 It is a bit surprising–appalling actually, to learn that when the Civil War started, no one in Washington had given much thought to details like sanitary needs, health care and the basic feeding of the soldier in the field.  Captain James M Sanderson was chosen by the “Commission of Subsistence for Volunteers,” to write this book “Published for Districtuion to the troops, Headquarters, Army of the Potomac.” In the book, he suggested that each company should have one man designated as a cook. That might be someone who actually was trained as a cook, or someone who got on-the-job-training.  Additionally, other men would be assigned as the cook’s assistants.

How well this worked in practice, I have no idea. During the “fog of war”, during long marches and some horrible conditions, it is difficult to imagine many men actually thumbing through the Camp Fires and Camp Cooking or Culinary Hints for the Soldier to find a recipe for that evening’s dinner.  Nevertheless, for anyone who did have the luxury of time to look in the book, and the rarity of good ingredients to use, this book presents a handful of very practical recipes and hints for camp cooking.

Remember that beans, badly boiled, kill more than bullets; and fat is more fatal than powder.  In cooking, more than in anything else in the world, always make haste slowly.  One hour too much is vastly better than five minutes too little, with rare exceptions.  A big fire scorches your soup, burns your face and crisps your temper.  Skim, simmer, and scour, are the true secrets of good cooking.

The first and last two sentences there could make it on to embroidered mottos to hang in any kitchen.  However, sentence number two reveals one of the things we 21st century diners do not like about 19th century cooking–or rather overcooking, as blessed by Captain Sanderson.  Of course, with stew, he is mostly right.

Take the pieces of beef reserved for frying or broiling, and cut them into pieces about two inches square and one inch thick; sprinkle them with pepper and salt, and put them into frying pans, with a little fat; place them over the ﬁre until half cooked; then turn them into camp kettles, adding a handful of ﬂour and six onions cut in quarters to each kettle, with just enough cold water to cover the meat; add also to each kettle two dozen potatoes pared and cut in quarters. Stew slowly over a moderate ﬁre, skimming every now and then, for three hours and a half; then stir in each two table spoonsful of vinegar, and serve smoking hot. All kinds of vegetables—such as leeks, carrots, parsnips, and turnips—can be added to this stew with advantage.   From Culinary HInts for the Soldier (1862)by Captain James M. Sanderson.

To arrive at my version of the beef stew, I went through two updates.  The first, from the book A Taste For War: The Culinary History of the Blue and the Gray

(2003) by William C. Davis uses two pounds of beef. The author assumes that the original recipe is using about 6 pounds of beef, and therefore cuts the ingredients by one-third. Some changes are made for clarity and some apparently just because.

Cut 2 pounds of beef roast into cubes 2 inches square and 1 inch thick, sprinkle with salt and pepper, and put in frying pan with a little pork fat or lard. Put them over a fire until well browned but not fully cooked, and hen empty the pan into a kettle and add enough water to cover the meat. Add a handful of flour, two quartered onions, and four peeled and quartered potatoes. Cover and simmer slowly over a moderate heat for 3 ½ hours, skimming any fat that rises to the top. Then stir in 1 tablespoon of vinegar and serve. Other vegetables available, such as leeks, turnips, carrots, parsnips, and salsify, will make excellent additions. From A Taste for War
by William C. Davis

Finally, I looked at the fascinating website History Kitchen where Tori Avery dissects and recreates historic recipes.  In 2012,  she follows Davis’ version, but adds carrots, parsnips and a leek.  I followed her recipe with some changes but found the 3 quarts of water she called for for two pounds of meat was far too much liquid.

The result, at any rate, since it is only seasoned with salt and pepper, can be rather bland for today’s tastes.  The original version was not BAD–it just perked up a lot when I added a mix of Italian herbs and some celery salt and garlic. But, it is after all, army food–so as a sample of what my Union soldier ancestors Henry Allen Butts and Erasmus Anderson were eating, it probably would have ranked high on their list. It was hot. It had some meat in it. It was filling.

So here is my version, with a few suggestions for modernization if you do not want to trade taste for authenticity!

I do not cook with onions, because I can not eat them.  THat makes a difference in the taste, but even with onions, this would have been a bland recipe without the addtional spices.

I do not usually peel potatoes, but since this is an army recipe--well what are you going to do with the grunts if there are no potatoes to peel?

The celery salt I mention in the text above is a special product that I buy at my farmer's market made with celery leaves and sea salt. 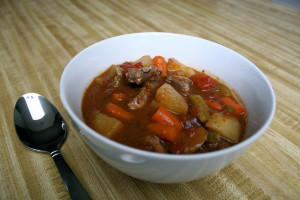 By The Flying Enchilada, Flickr.com, Used with Creative Commons License

Stew. One of the dishes that we share with our ancestors, even when we aren’t thinking about the historic roots. It probably ranks right up there with beer as one of the most ancient foods in our repertoire. A hearty, meaty dish perfect for fall and winter with it emphasis on root vegetables and whatever meat the hunter hauls home, everyone needs a good stew recipe in their kitchen.

Stew. Versatile. If your hunter is not dragging home a deer to cut up for venison steaks and roasts and stew meat, the stew recipe accommodates beef–even using up some tougher cuts. ( I have discussed here my reaction to hunting by the men in the family–and how common it was when I was growing up in Ohio.)

Beef Stew (or venison or squirrel, or whatever meat you choose) is a joy to cook because it is so forgiving. You can adapt the stew recipe to your own tastes, adding and subtracting seasonings as you like.

I also love the fact that leftover stew just keeps getting better. If you can resist eating it all up on the day you make it–when the house smells all meaty and garlicky and delicious from the long simmering concoction on the stove–put it in the fridge for the next day. Your patience will be rewarded.

I recently read Burnt Toast Makes You Sing Good: A Memoir of Food and Love from an American Midwest Family

by Kathleen Flinn, who grew up mostly in Michigan. You can find a complete review of her food memoir at my sister site, A Traveler’s Library. Here at Ancestors in Aprons, it will join our page of “Food Books that Stir Family Memories,” and I could not resist sharing her Grandpa Charles’s stew recipe.  Doesn’t that sound like just the kind of food memory we like to talk about here?

Although stew is one of the things I make without a recipe–tossing in herbs (usually Italian, sometimes French) and chopping whatever veggies I have on hand (I like to add rutabagas), I like the suggestions in this recipe.  It adds a bit of vinegar, balanced by a bit of brown sugar, which I imagine helps tenderize the meat and add a richer flavor.  Also, the thought of using allspice for flavoring strikes me as inspired.

I totally agree that browning the meat adequately is the key. 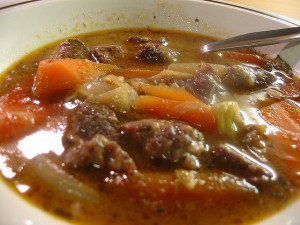 From BURNT TOAST MAKES YOU SING GOOD: A Memoir of Food & Love
from an American Midwest Family by Kathleen Flinn. Reprinted by arrangement with Viking, a member of Penguin Group (USA) LLC, A Penguin Random House Company. Copyright © Kathleen Flinn, 2014.

Katherine Flinn attaches the following note at the beginning of the recipe, found on page 129-131 in Burnt Toast Makes You Sing Good.

“The key is to get the meat good and brown,” Mom says of Grandpa Charles’s stew recipe. “If it looks a bit charred, that’s about right.” If desired, add 2 to 3 minced garlic cloves with the carrots and onions. If the meat is particularly tough, you’ll need to simmer it longer. I like to serve this with hot buttered noodles; see Della’s Homemade Noodles (page 250).