Mother always said that Aunt Rhema made the best gravy. That is Rhema Anderson Fair (1901-1996), about  whom I will be writing more on Thursday this week. My recollection is that Aunt Rhema  was good at many things, but on family dinner occasions, she for sure would be assigned the gravy detail.

Of course the thing about perfect gravy is not so much the flavor (although I’ve eaten a lot of over-salted gravy)–its the smooth texture that is so elusive. I found it difficult to get smooth gravy or white sauce, until I started stirring with a whisk instead of a spoon. But having proved that I could do it, I now use a turkey gravy from a jar, and stir in the turkey drippings and giblets to give it more oomph. Shame on me.  But at least I draw the line at marshmallows on my sweet potatoes and mushroom soup-sauced green beans with onion rings–the two dishes that were must-haves from the 50s through the 70s.

What do we need gravy for anyhow?  If you cook the turkey right, it will be juicy and won’t need disguising and moistening.  Mashed potatoes don’t excite me. The only possible reason for making  mashed potatoes for Thanksgiving dinner is to make  fried potato patties with the leftovers and I like leftover turkey gravy on the potato patties.

Come to think of it, the best reason to make a Thanksgiving dinner is to have leftovers! Turkey and cranberry sauce sandwiches, turkey enchiladas, a bowl of dressing with gravy poured over it, like milk over cornflakes. Pie for breakfast…bring on the leftovers! But I digress….

Gravy is one of those things that mothers and grandmothers are just expected to know how to make, so of course nobody bothers to write down a recipe. Since I don’t have Aunt Rhema’s gravy recipe–or mother’s or grandmothers–I’m going to look at two vintage cookbooks and see what they say.

I know that in my family giblet turkey gravy was the assumption, and almost on auto-pilot, I cook the giblets in water, chop them up and mix them into stuffing or gravy. And I’d use low salt chicken broth instead of water to supplement the drippings. One more tip–baste the turkey with lots of butter to get the best possible drippings.

In 1925, The Buffalo Evening News Cooking School Cook Book does not list turkey gravy separately, but includes it with their Roast Turkey recipe.  By the way, they roast a ten -pound turkey for four hours, which would leave a shriveled turkey jerky with our modern turkeys that cook much more quickly.

For gravy, pour off liquid in pan in which turkey was roasted.  From the liquid skim one-fourth cup of fat, return the fat to pan and brown with 5 Tablespoons of flour; add slowly three cups of stock in which giblets were cooked,[I don’t recommend this as it can be bitter], or add two cups of boiling water to dissolve the glaze in bottom of the pan and substitute for broth. [We would say ‘deglaze the pan with 2 cups boiling water or broth]. Cook five minutes, season with salt and pepper and strain; add the giblets chopped very fine.  The giblets may be used for force meat balls or chopped fine and mixed with the stuffing.

By the way, the Buffalo Cooking School gives helpful information about choosing fowl. Here’s what they say about turkey.

Turkeys are old when they have long hairs, and the flesh which shows through the skin is purple.  Turkeys are at their best in mid-winter. In the spring they begin to deteriorate.

Thanks goodness for Butterball or for the naturally-raised turkeys sold at natural food stores. You can see more of the Buffalo tips for fowl in my roasted chicken article. 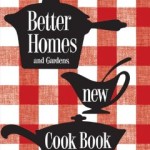 Now fast-forwarding about 28 years, let’s see what the Better Homes and Gardens Cookbook has to say about turkey gravy. Their gravy instructions come in four steps, accompanied by four pictures. And they suggest four variations–brown, cream, chicken, or giblet gravy. 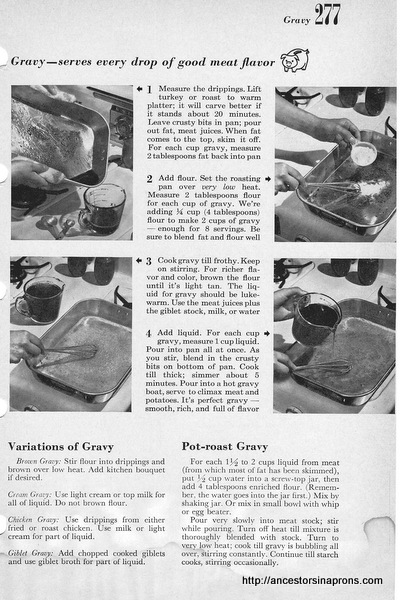 1. Measure the drippings.  Lift turkey or roast to warm platter; it will carve better if it stands about 20 minutes.  Leave crusty bits in pan; pour out fat, meat juices.  When fat comes to the top, skim it off.  For each cup gravy, measure 2 Tablespoons fat back into the pan.

2. Add flour.  Set the roasting pan over very low heat.  Measure 2 Tablespoons flour for each cup of gravy.  We’re adding 1/4 cup flour to make 2 cups of gravy enough for 8 servings. Be sure to blend fat and flour well. [Note: their illustrations show the cook using a whisk.]

3.  Cook gravy till frothy.  Keep on stirring.  For richer flavor and color, brown the flour until its light tan.  The liquid for gravy should be lukewarm. Use the meat juices plus the giblet stock, milk or water.

4. Add liquid.  For each cup gravy, measure 1 Cup liquid.  Pour into pan all at once.  As you stir, blend in the crusty bits on bottom of pan.  Cook till thick; simmer about 5 minutes.  Pour into a hot gravy boat, serve to climax meat and potatoes.  It’s perfect gravy–smooth, rich, and full of flavor.

For Giblet Gravy, add chopped cooked giblets and use giblet broth for part of liquid.

Want a modern recipe for turkey gravy?  I looked at several, but Bon Apetit had the most delicious-looking picture, and an easy recipe. Take a look. You’re going to want to lick the screen.

So there you have it. Do you make turkey gravy? What do you put it on?