Carlos Morgan, the second son of Jesse Morgan has presented me with more questions than I can answer in a reasonable amount of time.  Carlos is the son of my 2nd great-grandfather, Jesse Morgan with Mary Pelton, Jesse’s first wife.  Since I am descended from Jesse’s 2nd wife, Carlos does not qualify as a close relative.

On the other hand, I would like to find some descendants of Jesse Morgan that trace back to his first wife because that might mean finding more information about Jesse. So I continue to plod through the records of Jesse’s four children. Last week I wrote about Charles Morgan, the oldest son. Charles (or Charley) had six grandchildren who lived in California, so I might some day find a connection through that family.

Meanwhile, Carlos’ history proves slipperier than that of Charles and includes mystery photos. 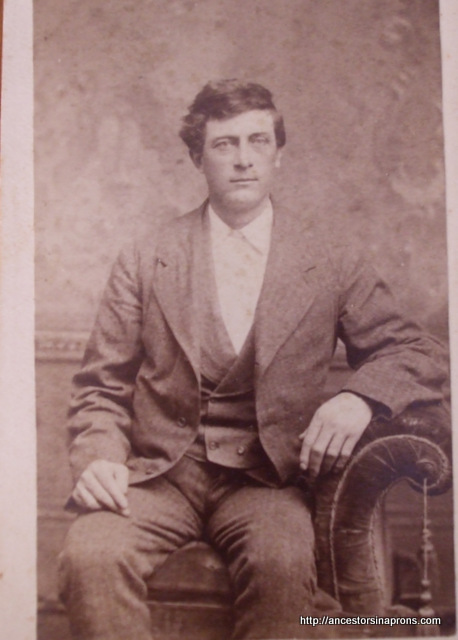 Photo from St. Joseph MO that I believe is Carlos Morgan circa 1880

This photo comes from the photo album of Hattie Morgan Stout, Jesse Morgan’s child with his second wife. The name of the subject was not on the photo, so I originally included this handsome man in the “Unknown” file. As I wrote earlier, I had hoped it might be Jesse Morgan, but research proved that was impossible. For a look at what I learned earlier about this photograph, follow that link above.

What the Photo Can Tell Me

The photo is what was called a “carte de visite”  A paper photo is pasted on a cardboard backing that is roughly 2 1/2 x 4 inches. Carte de visites did not show up in the U. S. until 1859, and usage died out be 1889. Furthermore, the curved corners and fact that it shows most of the body instead of just the head, narrows it to 1874-1880. 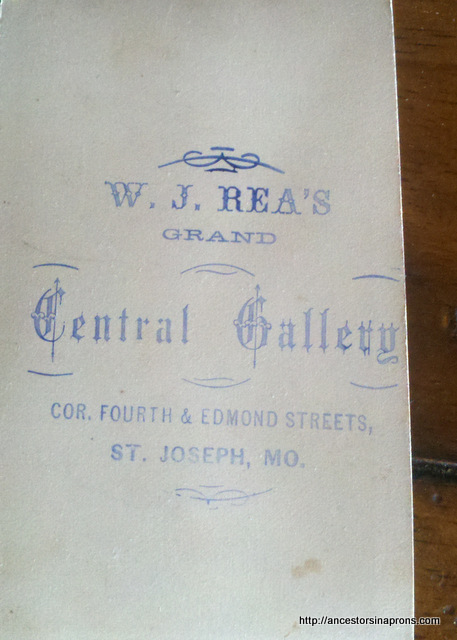 Photographers advertised their services on the back of the photos, and in this case the photographer was W. J. Rea’s Grand Central Gallery, Cor. Fourth & Edmond Streets, St. Joseph, Mo.  Records I found about the photographer W. J. Rea showed that he moved from Canada to Michigan to St. Joseph and on to California.  It looks like this portrait had to have been taken in 1880, probably the only year he was in St. Joseph. The only problem I have is that if the photo was taken in 1880, Carlos was 48 years old.  Does he look 48 in that picture?

Could Carlos Morgan have had his photo taken in 1880 in St. Joseph Missouri?  It is time to look at a timetable of his life.

The Pattern of Carlos Morgan’s Life

Born in Chautauqua New York on June 2, 1832, Carlos was about five years old when his mother and father moved to Killbuck, Ohio. A year later, his mother died. The four children were parceled out to relatives, and I did locate his older brother with their maternal grandparents back in New York. However, Carlos is not living with that family in 1840 and since Jesse Morgan and his widow both had  very large families, I have not tracked down a family where Carlos might be living. (It does not help that the 1840 census lists only the head of household by name–so Carlos would be a tick mark in the 5-9 year old category.)

I assumed he had gone back to Pennsylvania or New York with family, but he might have lived with some extended family in Ohio, because in 1850, at the age of eighteen, his is living with a family in Hardy Township, Holmes County, Ohio. That is near Killbuck where his parents previously lived, and where my great-great-grandmother Mary Bassett Morgan was living that year.

So at 18, Carlos is living with a man identified as a “tinner” and Carlos is working as a “tinner”. His education had ended with eighth grade, so he has been working for some time.

A tinner can mean a person who mines for tin or a tinsmith.  As far as I know there were no tin mines in Hardy Township, so the latter definition is the one for Carlos.  My grandfather on the other side of my family, Cliff Kaser, worked with tin a generation later in Holmes County.

While living with another family, Carlos learns of the death of his father in far off California. While I had no knowledge of his relationship with my great-great grandmother, the fact that his half sister, my great-grandmother kept his picture and his wife’s indicates to me that the family might have been closer than I realized.

Apparently Carlos started west to find his fortune. He meets Jane Anne Warfield of Dubuque Iowa and they are married in St. Louis on October 22, 1857. The marriage certificate indicates that he, too, is a resident of Dubuque, Iowa. Why did they go to St. Louis to marry? His bride is only 19. Did they have to run away? Perhaps marriage regulations were less stringent in Missouri and they did not need her parent’s authorization. (If you know, please leave a comment with the explanation.) Or perhaps they are merely following the migration of Jane’s brother Charles Warfield to Missouri.

Learning Jane’s name was a surprise.  In Hattie Morgan Stout’s photo album, I had found a picture of a beautiful woman, in fact, the most beautiful woman in all my antique photos. 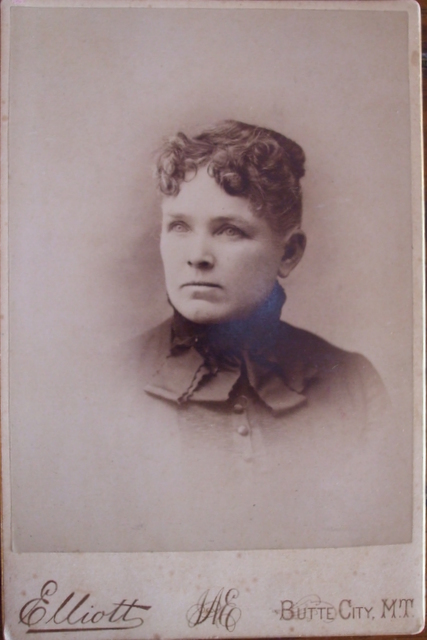 In 1860 they are living in Plattsburg Missouri with Jane’s brother’s family. Carlos and Jane have a one-year-old daughter, Minerva. I find no further mention of Minerva Morgan, so must assume that she died in childhood. Jane’s brother is a tinner like Carlos.  Jane’s father also lives with them.  So my insatiable search for story senses some connections.  Perhaps Carlos was working as a tinner and met Jane’s brother in Iowa and that led to the marriage. But since Jane’s father is living with them just three years after the marriage, perhaps he did not object, after all.

Plattsburg, during the Civil War was split between northern and southern sympathizers, but I am inclined to think the Morgan/Warfield family group did not stay until the war started.

Most importantly, Plattsburg is just 30 miles from St. Joseph’s Missouri.  Since Plattsburg was a railroad center, transportation to St. Joseph–where the young man’s photo was taken– would have been easy.  This creates some pretty good evidence that Carlos might have gotten his portrait photograph taken in the larger town.

Since I have not found an 1870 census listing Carlos, I do not know for sure when he left Plattsburg, Missouri, but by 1880 he was living in Bozeman Montana and still working as a tinner.

I find no Civil War military record for either Carlos or his brother-in-law Charles Warfield. They might have lit out for the unnamed territory that became Montana at the outset of the Civil War to avoid military service. Or they might have migrated along with the hundreds that joined the mid-1860s gold rush to the area. At any rate,Bozeman, founded in 1864, would have been the typical fast-growing, rough-and-tumble town of the country’s wild west. Both men are listed as unemployed for half the year, so perhaps Jane, who is listed as a milliner, was supporting the family.

Although I have found no information on Carlos’ death, his wife Jane is living as a widow and working as a seamstress in Butte City, Montana by 1899. That indicates that Carlos died in his sixties. The City Directories there continue to list her as late as 1914, but, like Carlos, I can find no evidence of her death.

You can tell by the light tone of her eyes, that they were an icy blue.  This photo is also paper on cardboard, but is a larger format that came along a little later than the carte de visite of Carlos. These are called Cabinet Photos. 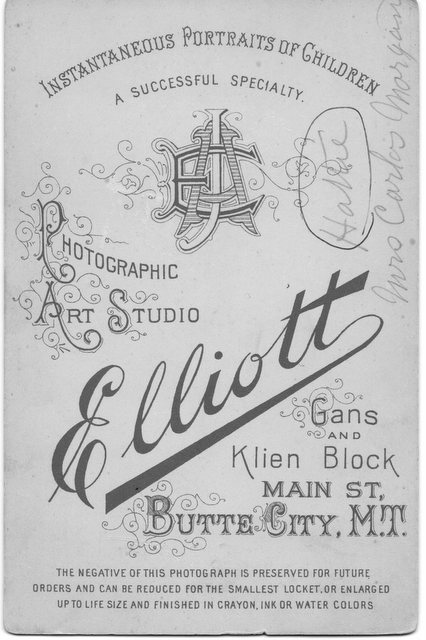 The pencil notation, which looks like the handwriting of my Grandmother, led me to believe that Carlos’ wife was named “Hattie”. However, since I know that he married Jane Anne–unlikely called Hattie–the note must mean the photo belonged to Hattie (Stout).

Here the photographer advertises himself on both the front and the back of the photo. Brothers John A. Elliott and George E. Elliott were working together in Butte Montana in 1890 and 1891, and John alone has existing photos dated as late as 1909. Since the back of this photo has a logo including both their initials, I have to believe the photo was made about 1890.

The couple were living in Bozeman in 1880, but by 1889, the year that Montana became a state, Jane was living alone in Butte.  As I mentioned above, she is listed in City Directories as a widow and a seamstress, so it seems appropriate that she may have had a photograph made as a kind of advertisement. However, just as in the case of Carlos’ assumed photograph, she looks a bit young for the date. Jane would have been 54 in 1890.  Butte and Bozeman are not that far apart, so she might have gone to Butte earlier for a photo when she lived in Bozeman. However, if the date is earlier than 1890, then the histories of the Elliott brothers that I have read must be wrong.  Its a dilemma.

So, with some gaps, I have traced  Carlos Morgan’s moves from his birthplace in New York to Ohio, Iowa, Missouri and finally Montana. Ever Westward.

Next up: Carlos sister Malvina led two lives. After a settled married life in the midwest and East, she ventured west as a widow. Another of Jesse Morgan’s childfren following in his wandering footsteps.