CAUTION: Nerdiness to follow. If you want to read the simple story of Abraham Brink 1780, go here. What follows is a more detailed description of the research, meant just for those who like to follow along as I solve puzzles. If you are principally interested in the research, you also need to read the story in order for this to make sense.

When I started looking at the Grandfather of my great-grandmother Mary Brink Anderson (Kline), I found myself questioning just about everything that I read on other trees, even those of people who seem to be careful and thorough researchers.

The fact that Mary Brink’s father’s name was Abraham W. Brink, apparently named for his father, did not help. There are an amazing number of Abraham Brinks in 18th and 19th century Pennsylvania and Ohio. To further confuse the issue, the name Abraham is sometimes shortened to “Abram” and some modern day family historians think that Abram and Abraham are different people.

Many family trees refer to Abraham W.’s father as Abraham B. Brink.  I have yet to see a record that uses that middle initial, although I am now satisfied that Abraham W. was named for his father, another Abraham. Until I have some proof of a different name, I’m calling him Abraham the Elder.

That relationship stuff may be confusing, so let’s look at the lineage right now instead of waiting until the bottom of the page.

In What State was Abraham Brink, the Elder born?

Some say Pennsylvania and some say New Jersey.  That confused me until I looked at a county history and a map. Looking at the Pennsylvania Formation maps, it is obvious that our country, even as far east as eastern Pennsylvania had not yet been fully organized into states and counties when Abraham the Elder was born in 1780. After all, we were not officially a country. The American Constitution was not finalized until 1787.

The most frequently mentioned place of birth is Bushkill in what is now Pike County, Pennsylvania. Some people list his birthplace as Wayne County Pennsylvania.  I learned that Pike County was founded in 1814, from Wayne County. However, Wayne County also did not exist in 1780, when it is believed that Abraham the Elder was born. The far northeastern corner of Pennsylvania had been ceded by Virginia, and the county of Northampton was to occupy part of that area, but even that was not yet official in 1780 because surveys were not yet complete. 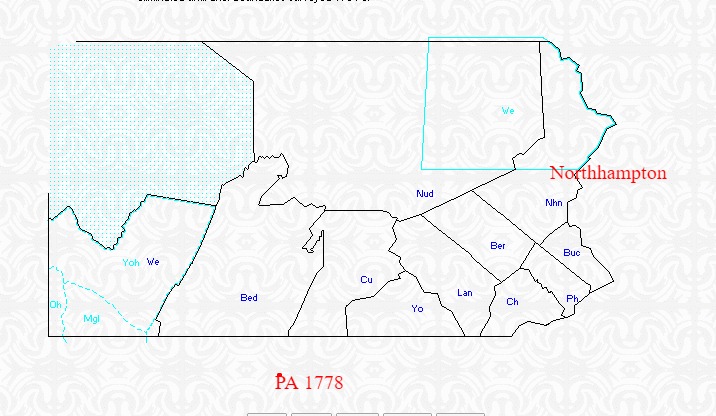 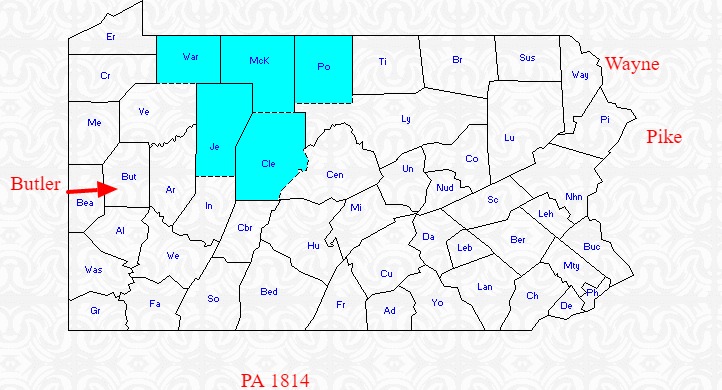 Pennsylvania Counties in 1814 (colored areas do not concern us). Butler is the county where Abraham W., son of Abraham was supposedly born, but the census report contradicts that.

In the 1850 census in Holmes County, Ohio, Abraham Brink is listed as born in New Jersey, but when his children filled out census reports, they listed him as born in Pennsylvania. His children were born in  Pennsylvania, which might have led them to assume he was also. Without a church record or birth record I cannot say for sure, but we do know something about the area where he was born.

The Area where Abraham the Elder was Born

This patch of land overlapping southern New York state,northwestern New Jersey and north eastern Pennsylvania, was Dutch. A book about the earliest Brinks in North America shows the map of the area, including he Catskill Mountains area made famous by Washington Irving in his tales from he Dutch legends. The settlements, a caption said, extended into Bradford and Pike County in Pennsylvania. (Using the final county names rather than the earliest names.)

That hints that Abraham the elder was born of one of the oldest Dutch families to settle in North America and traced back to their arrival in New  Amsterdam (now New York).  Unfortunately, I am not satisfied with proof of who Abraham the Elder’s father was, and am not ready to make that leap back to the distinguished Dutch Burghers who came to this continent shortly after the Pilgrims arrived in New England.

The first clue to Abraham the Elder’s existence is found in the 1850 census of Killbuck Township, Holmes County, Ohio.  Since that is where Abraham W. Brink was born, it seemed likely this Abraham is Abe W.’s father.  The 1850 census, we have Abram Brink, 70, living with John Brink, 25 and Julian Brink, 17 and an infant.  Tracking John in other census reports quickly shows that ‘Julian’ is really Julianne or Julie Ann, John Brink’s wife. Although this census does not show relationships, it seems likely that we have a retired father living with his son.

There are three earlier census reports for Abraham Brink that might match, but in 1820, 1830 and 1840, there is no solid information, just the name of the head of household and what I call “chicken scratches”–tick marks under an age range.  We need more information before accepting that Abraham the Elder was the man named in those “chicken scratch” census reports.

Confirming that Abraham the Elder had a son John was the next step, accomplished when I found on line the will of Abraham Brink. This was a challenge also, as only the index appears on Ancestry.com.  I took the information about what volume and page the will appeared in and went to Family Search.org where I found an image of the will.

It is a simple will, but it confirms that he died in 1853 and lists his children. In the list below, I include the birth and death dates of those for whom I can confirm that information.

We know from the will that there were five sons and five daughters living when Abraham the Elder died and one additional daughter who died as an adult. Unfortunately, I have not yet been able to locate information on some of the married daughters and the oldest son.

The will leaves the farm and most possessions to John Brink, the youngest son, with whom Abraham had been living.  The other children (and Polly’s heirs) each receive $5, except for George and Sarah, who each get $20. Following George’s life through available documents, it looks as though he may have struggled financially and his father thought he needed the extra money.

No wife is mentioned in the will.  In the Wolf Creek cemetery in Holmes County, there is a stone for Lucinda Brink, wife of Abram Brink. The stone says she died January 19, 1846 at age 66 (so born in 1780). Lucinda, this lady about whom we know so little, must have been my 3x great grandmother. Since their eldest child, Jesse has the unusual middle name of Runnels, I intend to follow up and see if that might be her maiden name.

Back to the Census Records

Knowing the ages of his children (except for Jesse, Martha, Sarah, and Polly) helps determine if the 1820 through 1840 census reports for Abraham Brink belong to this Abraham.

The 1820 and 1830 census reports are from Dyberry, Wayne County, Pennsylvania, not far north of Abraham the Elder’s birthplace.  The 1840 census is from Killbuck Township, Holmes County, Ohio.  Given the fact that there is a land purchase record of Abraham Brink, in 1835, that indicates that we’re looking at the same person. Additionally, the children for whom we have records were all born in Pennsylvania.

According to census reports, he lived in Dyberry, the county seat of Wayne County  at least between 1820 and 1830, despite reports on family trees that some of his children were born in other counties. Contrary to logic, children are reported to be born in 1812 in Somerset County, the opposite corner from Wayne; in 1814 in Wayne; in 1819 in Somerset again; and in 1820, Abraham W. is said to be born in Butler County which is located in the east of Pennsylvania.

It took several hours of comparing the marks on the three census reports with the birth years of the known children, but I am convinced that all three census reports belong to Abraham Brink the Elder and his family. (I won’t bore you with the details, but if you want to know more, please do e-mail me and I’ll be glad to share specifics.)

For a primer on how public lands in Ohio were distributed and sold, see this book.

As with the earlier census reports, because of scanty information, I hesitated to assume that land records showing an Abraham Brink buying land in Killbuck Township, Holmes County from the federal government was the Abraham I was looking for. However, the pieces of the puzzle came together as I looked at a Bureau of Land Management map of locations of section, township and range and matched it up with the grants purchased by Abraham, and by his older son, Mordecai.  Jesse Brink, the oldest son, initially moved into an adjoining township, according to the 1840 census, but later purchased land near but not adjacent to his father and Mordecai. 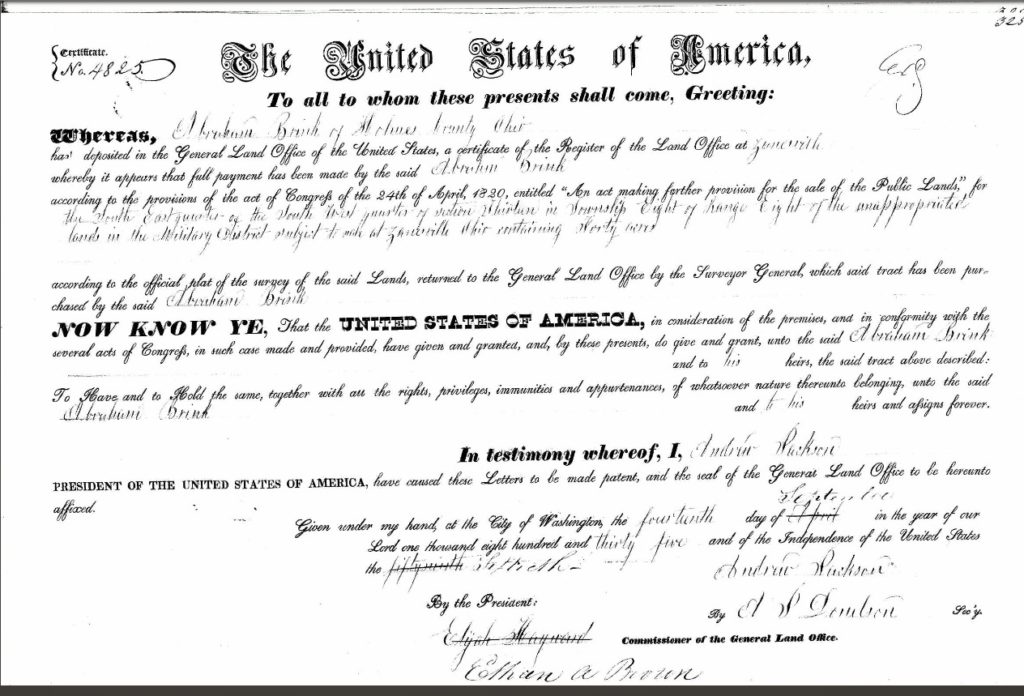 Abraham Brink U.S. General Land Office Records Sept 14 1835. One of several land records. This one signed by a secretary of President Andrew Jackson.

Sometimes tracing the life of an ancestor is like putting together a jigsaw puzzle.  Each piece depends on the pieces around it.

This jigsaw puzzle, Abraham Brink (the Elder) still has some gaping holes, but it has been a rewarding challenge putting together the pieces that I have found so far.

A Brink book : some descendants of Lambert Huybertse and his wife Hendrikje Cornelisse (the American progenitors of the early Brink family) from Wageningen, Gelderland, Holland in 1660 to New Amsterdam on “The Faith”, 1996, by Laurel Shanafelt Powell. On Line at the Family Search Catalog.