When I mentioned on line that I followed my mother’s tradition of making a main course of apple dumplings  (with or without a side dish of cold cuts and cheese slices), friends on social media wanted to come to my house for dinner.  So how would you like an Invitation to dinner with a main course of waffles? 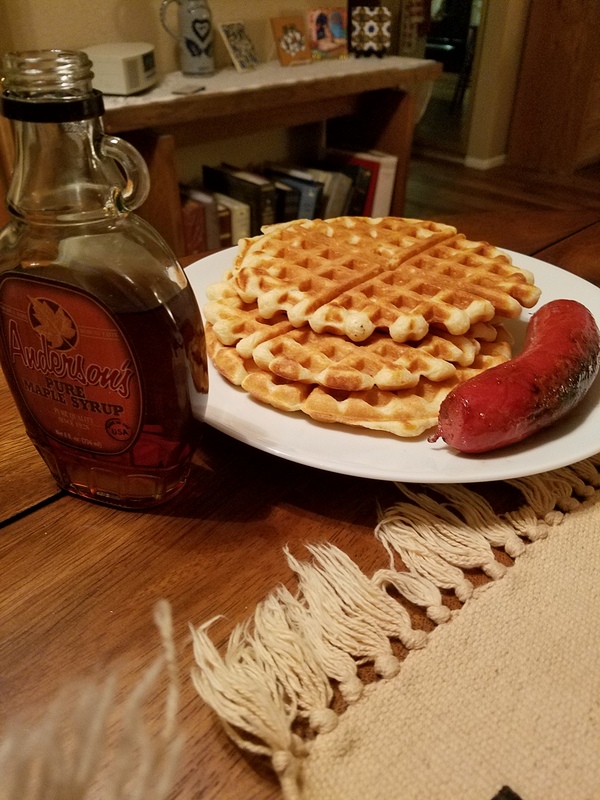 Waffles for dinner with knockwurst and syrup

After talking about Waffle Iron Cookies, it occurred to me that I have never talked about making waffles–a mainstay on most of my grandmother’s tables and mine.  If you think of waffles only as a breakfast food, you’re missing a base for an easy meal that is good any time and highly flexible.

A Bit of History

The history of waffles on the Mental Floss website reveals some things you might not have known and some tools you may never have seen. From Belgian waffles to frozen Eggos, waffles kept growing in popularity. Thomas Jefferson, a real conoisseur of good food, brought not one but four waffle irons home from Holland. And if you’re daring, follow the link from the waffle history article to a book that includes a description of a “wafle-frolic” in Colonial New York state.

Mental Floss tells us that the first waffle mix was marketed in 1889, and the first electric waffle iron was marketed by General Electric in 1918. By the 1950s and 60s when my mother bought this little waffle iron, waffles were taken for granted. 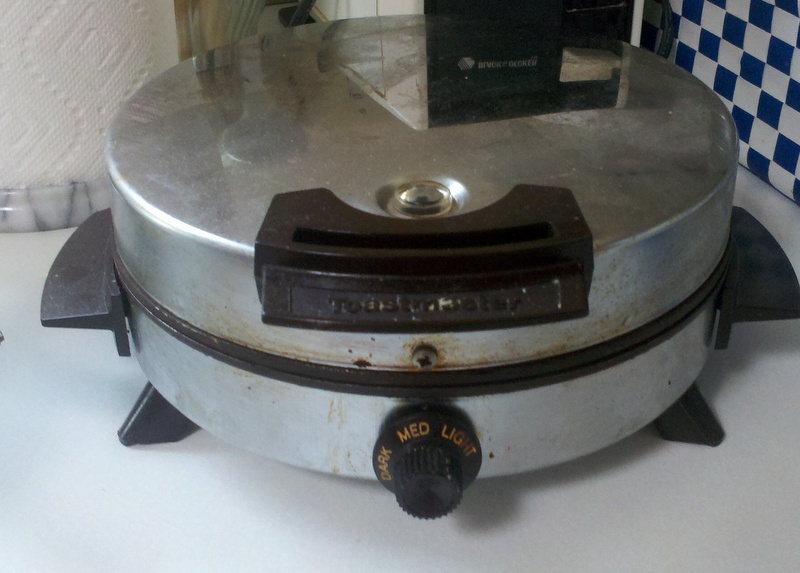 Make Your Own Waffles

Although there are simple one-egg recipes that do not call for separating the eggs and beating the egg whites, I have tried many waffle recipes and am convinced that separated eggs make a big difference in light and crispy waffles.  I also like to use buttermilk, but for those who don’t like buttermilk (here’s looking at my sister, Paula) I have included two recipes here–one with plain milk.

The plain milk recipe comes from an interesting little cookbook I picked up second hand. I love hand written recipes. I also love notes found in old books. So this book brings the best of both those quirky loves. It is called Handwritten Recipes: A Bookseller’s Collection of Curous and Wonderful Recipes Forgotten Between the Pages. The title says it all.  He reproduces the handwritten recipes and transcribes them with a few notes.  He also shows us what book the handwritten and forgotten recipe was stuck inside. 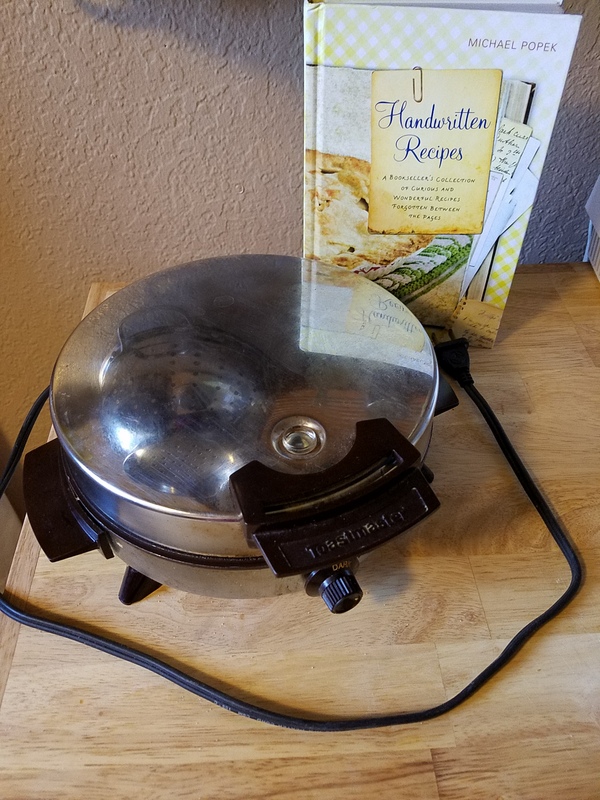 Just as some old recipe books start with things like “First catch a rabbit,”  the first step in a waffle recipe might need to be

This is mine, a mid-century Toastmaster brand 8″ round waffle iron inherited from my mother. It has a chrome finish, a non-stick interior and bakelite handles and dial. 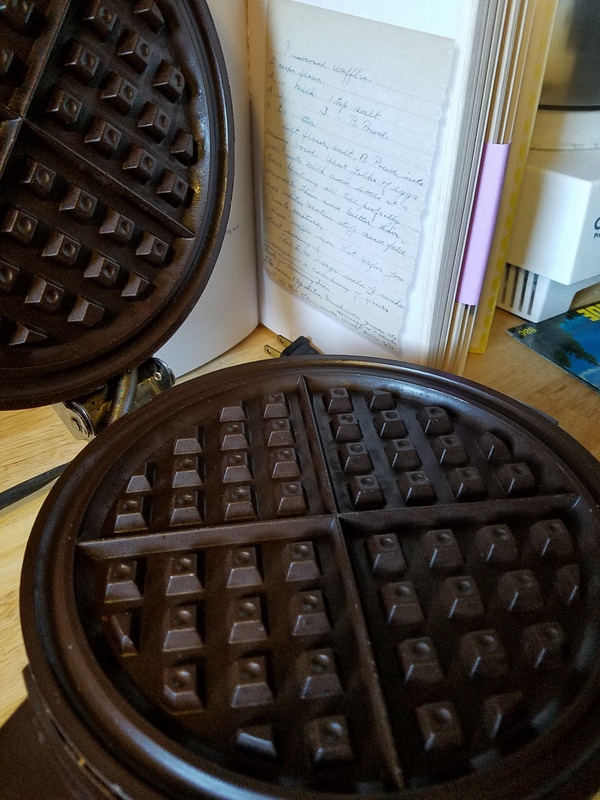 Although I have never greased it before use, waffles never stick and the non-stick finish has not peeled or cracked.

The Waffle Recipes and a Helpful Hint

The anonymous person who wrote the recipe in the “Handwritten Recipes” book, included on her recipe note, instructions on keeping the waffle iron clean. and a “formula.”

Brush iron grids. Do not do this often. Never wash grid after cooking as it sticks.

Why did Mrs. Anonymous call her waffles “Universal Waffles?” Probably because it is the recipe that came with her waffle maker, a Universal brand. 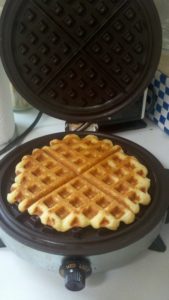 A hand written recipe found by the author of Handwritten Recipes in a 1940-era cookbook, makes a waffle that is hard to improve on.

This recipe comes from a book called Handwritten Recipes: A Bookseller's Collection of Curioius and Wonderful Recipes Forgotten Between the Pages.

Although the recipe's author says it feeds four, the book's author questions that, and I tend to agree.  As a side dish with a lot of other things on the table, maybe.  In my small round waffle iron, this recipe made five 7-inch waffles.

Do not clean with soap and water.  Instead, just brush off the crumbs.  Every few uses, you may clean with a paste made of 2 tablespoons baking powder and one teaspoon of water, which is rubbed on and brushed off.

My favorite buttermilk waffle recipe is adapted from Joy of Cooking. 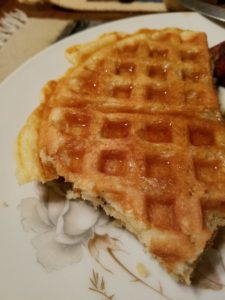 If you have never made waffles before, you need to learn how much batter to put in the waffle iron.  It probably takes less than you think it will need, so go easy with the first one until you figure it out.  Your waffle iron may come with instructions about amount of batter to use, and how long to bake the waffle.

You can add many ingredients to waffles to make the sweet or savory.  I like to add grated cheese or grated apples or blueberries.

Serve with butter to melt into the hot waffles, and syrup or applesauce to fill up the indentations.

Bacon or sausage or eggs go well with waffles.

This has been my response to the challenge of the week from 52 Ancestors  “Invitation to Dinner.” 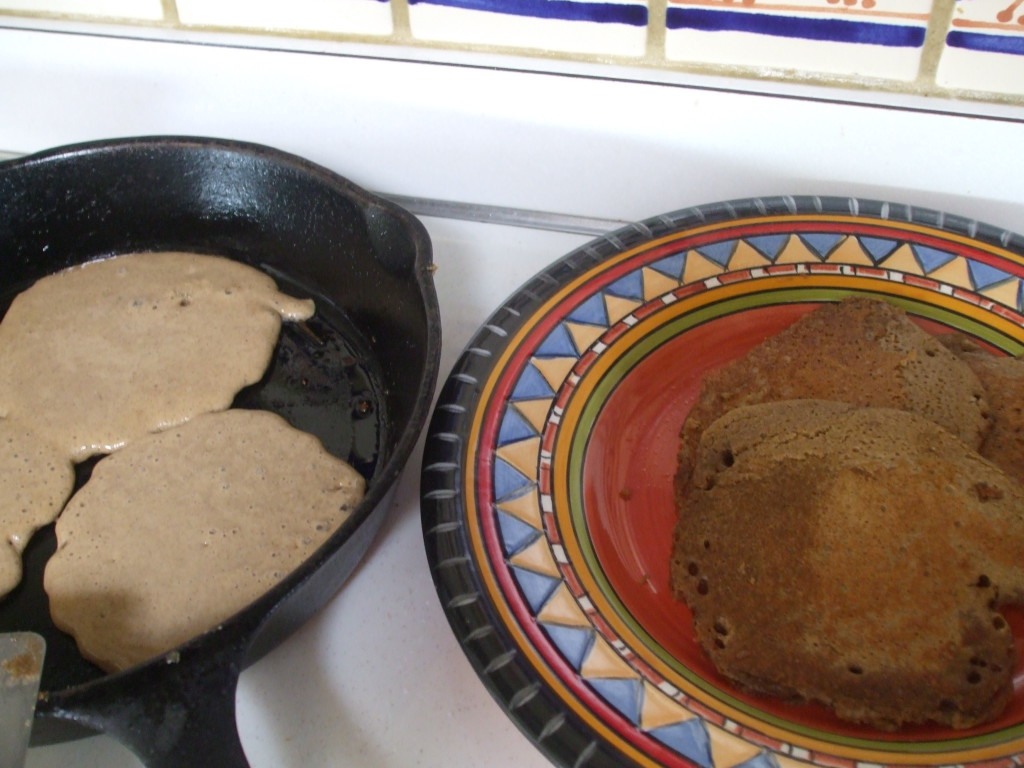 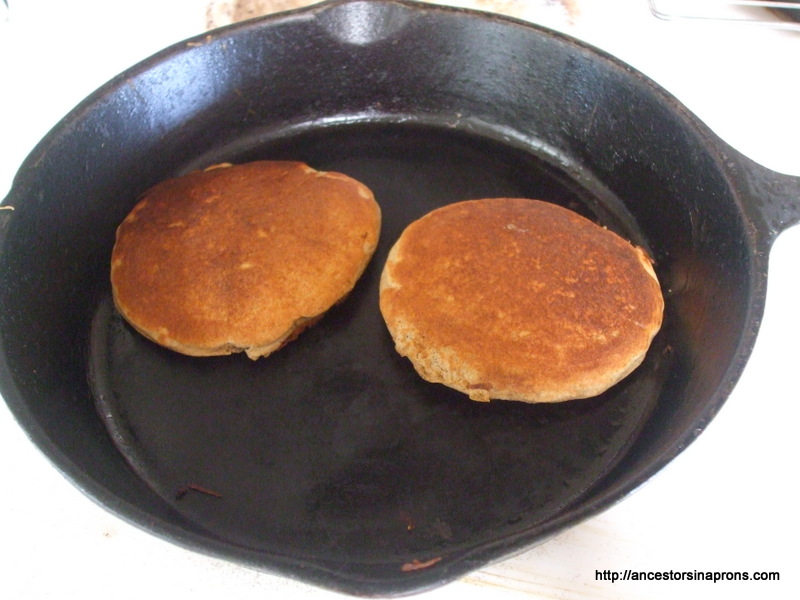 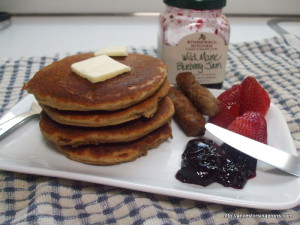