When I ask a question like “Grandpa Jesse Morgan, why did you go to Chautauqua County and why did you move to Ohio?”  a lot of people just shrug and say, “You’ll never know.”  I love challenges!

Just as in journalism, family historians are constantly seeking What, Who, Where, When. But the all-important Why is the most difficult thing for us to find when the ancestors are long gone and did not leave a journal or letters to explain their actions.

The Who, What and Where

Last week, I concluded that Jesse Morgan moved to Ohio because of the encouragement he received from a nephew, Aaron Purdy in an 1835 letter addressed to Jesse at Volusia, Chautauqua County, New York. Ironically, as my great-great grandfather, Jesse Morgan, was moving to Ohio, Aaron was giving up his grocery store in Holmes County, Ohio and taking off for the Pacific Northwest.

In searching for motivations for Jesse’s relocations, I found answers in a very unlikely place. I had searched birth dates for Jesse’s children to see where he lived when they were born, and looked for the cemeteries where they were buried. I had looked at the family of Mary Pelton, his first wife and where they lived. I had read portions of a history of Chautauqua County, a history of the Morgan family and a portion of a book about the Pelton family.

Taking time off from genealogy research (I thought) I was reading the historical account of Abraham Lincoln’s cabinet, Team of Rivals, by Doris Kearns Goodwin. She traces the backgrounds of the three men who worked most closely with Abraham Lincoln.  As I read about William H. Seward, who became Lincoln’s Secretary of State, a location jumped out at me: Westfield, Chautauqua, New York. Volusia, the place where Jesse was living in 1835, was a hamlet within the town of Westfield.

The book, Team of Rivals, introduced me to the housing boom in Chautauqua County and the Holland Land Company.  Perhaps that boom is what took Jesse there.  His wife-to-be had lived in the area on the Pelton family farm close to the nearby town of Sherman, so it is likely he met her after he moved. I may never know what Jesse was doing there.  Was he speculating in land? Was he teaching–a sometime later occupation? There was a Westfield Acadamy founded the year that he probably moved to Westfield, so I can speculate that he may have gone there to teach, and met his wife there. 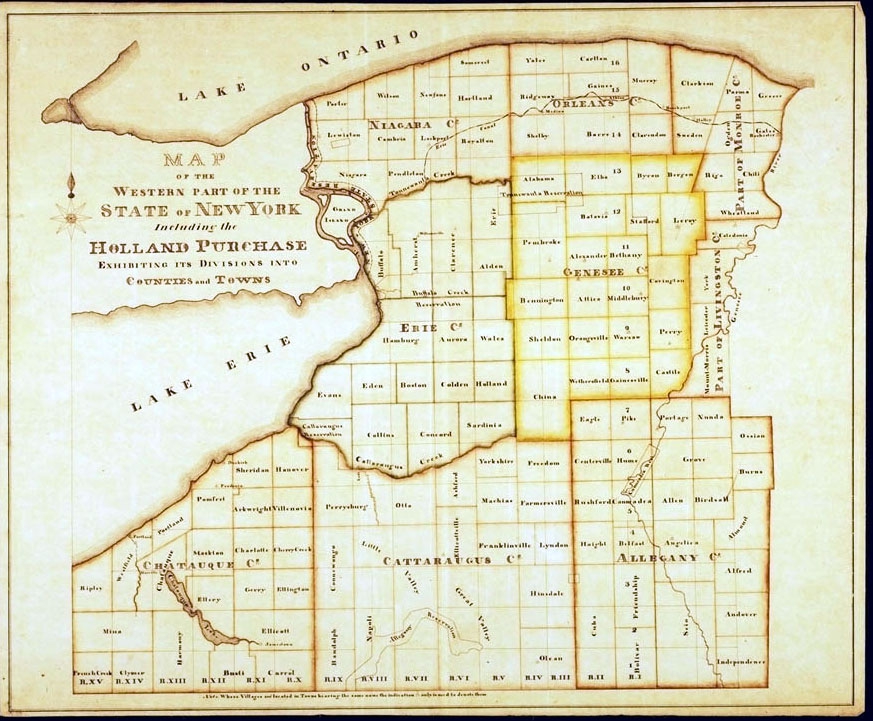 The Holland Land Company was an investment company owned by investors from Amsterdam. The original landholders never left Amsterdam to see the vast country they acquired in New York and a bit of northern Pennsylvania. One of the many towns that evolved from that original purchase was Westfield, Chautauqua County, New York.

Although the land company and its successors who bought smaller portions of the properties were generous in their terms, sometimes charging no down payment at all, I was interested to learn that settlers complained that interest was too high and a serious revolt developed. This unrest by settlers seems to be a foreshadowing of Jesse Morgan’s fate.

The first settlers of Westfield came from Pennsylvania, just as Jesse did. In 1801 two Pennsylvania men had purchased the land that would incorporate the new town and in 1805 the first post office was established and by 1803 there was a school.

Mary Pelton’s father  moved his family to Cuyahoga County from Oneida County in 1827, and Mary and Jesse Morgan’s first child was born in 1830, so they were probably married in 1829.

Jesse and his first wife lived in Westfield before they moved to Ohio in roughly 1837.  Their four children who survived to adulthood were born in Westfield in 1830, 32, 34 and 36. What drew him to Westfield from his father’s home in northwestern Pennsylvania?  And why did he leave?

In 1835, according to Team of Rivals, William H. Seward was hired as the manager to handle the legal details of land transfers and moved into a  rented house in Westfield, where he also ran the land business with five clerks. That means that William Seward and my great-great grandfather Morgan might very well have known each other, since Seward’s time in Westfield (1835-1838) overlaps Jesse (1829-1837). The “pleasant village” as Seward’s wife described it, had a population of just under 3000 in 1837.

I knew that something gave the restless Jesse reason to depart for greener pastures around 1837 or 1838. The reason became clear when I learned about a terrible recession, known as the Panic of 1837, that hit the booming housing developments of Chautauqua County very hard. William Seward had no sooner established himself there with a job with the Holland Land Company, than property sales plummeted.

This “panic” of 1837 brought widespread misery in its wake–bankrupt businesses, high unemployment, a run on banks, plummeting real estate values, escalating poverty.  “I am almost in despair,” Seward wrote home.  “I have to dismiss three clerks…”

From a letter by William Seward in fall, 1837, quoted in Team of Rivals. 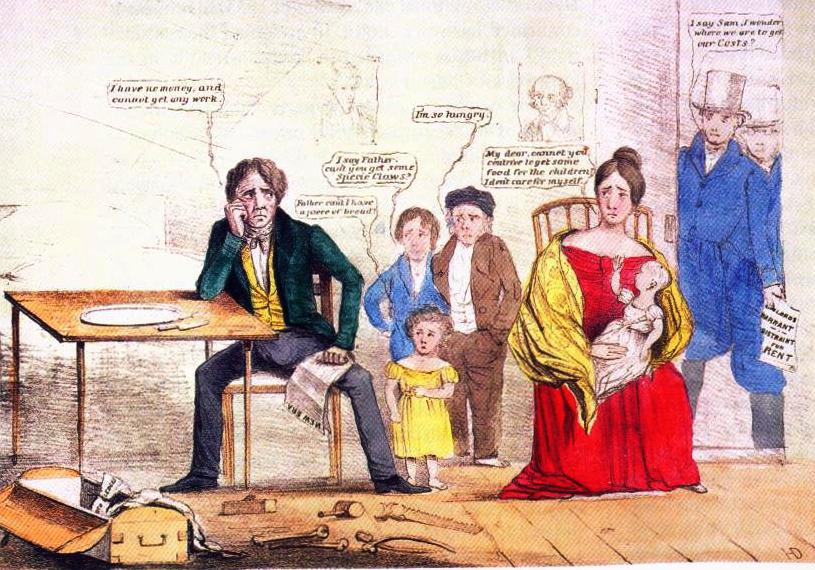 US Whig poster showing unemployment in 1837

This family of a tradesman parallels Jesse’s family in 1837–two boys and two girls.

In the midst of this great recession, largely driven by land speculation, Jesse joined the large movement into the new state of Ohio. His interest in Westfield continued, as I have a photocopy of a letter sent to him  in Ohio many years later from an old friend in Westfield that outlines the economy.

As you will see as I continue the story of Jesse, his move to Ohio did not solve his financial problems.  Again, I am not sure what he intended to do in Ohio. Mother thought that he taught at Keene Academy in Coshocton County and that is where he met his second wife, my great-great-grandmother Mary Bassett Platt, but as I look at the documents that possibility is looking less likely.  Jesse and his first wife’s infant son (who probably died as an infant) was born in Killbuck, Holmes County, Ohio.

Mary Bassett Platt’s first husband died in 1833 in Killbuck, and she received letters addressed to Killbuck, so there is no record proving that she went back to her home town of Keene to teach in the academy after her husband died. Because the records of Keene Academy seem to have disappeared, I have to say her teaching at Keene and meeting Jesse  could be a possibility, unproven.

Note: If I ever go on a research trip to Westfield, I can stay in the William Seward House which is now a Bed and Breakfast Inn. According to one account, William did not actually live in that house, but purchased it and oversaw (by mail) its remodeling by his brother Benjamin who succeeded him as land agent from 1838 to 1840. Furthermore, the Inn was saved from destruction, by moving it, so it is no longer even in the same location as the original mansion/land office.

James Morgan and his Descendants, by Nataniel Morgan, 1869, Hartford: Case, Lockhard and Bernard, available on line at archive.org

History of Chautauqua County, New York: from its settlement to the present time, Andrew White Young, 1875, Buffalo: Matthews and Warren. Available on line at archive.org