For Women’s History Month I will introduce you to some women who were deeply influential in our country, starting with my friend* Hannah Glasse.  Not politicians, not scientists (well applied science, maybe), but definitely a unique variety of artists.  I am talking about early women cookbook authors.

Boswell wrote that Samuel Johnson said, “Although women can spin very well, they cannot make a good book of cookery.”

Forget Samuel Johnson. Each week this month, I will give you a little information about how one of these women helped her sisters in eighteenth and nineteenth century America.

For the family historian, these women cookbook authors provide an invaluable guide to how your ancestors in aprons lived and cooked. For the foodie, the books gives us clues to why we eat the way we do.

The Women and Their Books

Hannah Glasse (1708-1770) writes for the edification of British Victoria-era servants rather than the wives of American frontier farmers. Nevertheless, her practical advice contains wisdom for the ages. Her book The Art of Cookery Made Plain and Easy first appeared in 1747. Her husband, John Glasse, whom she had married in 1724, died the year her book was published. The same year, she started her seamstress business.

Apparently the business did not do well, because by 1754, sources believe she declared herself bankrupt . She auctioned off the rights to her popular book, and was declared out of bankruptcy in 1755. However, in 1757 she again was broke and serving time in debtors prison. Apparently she put her time in prison to good use, because when she got out, she published The Servants Directory. While The Art of Cookery continued to make money for others, her new book did not catch on. Her third book, The Complete Confectioner focusing on preserved fruit, wine and desserts appeared in 1760. Several editions appeared, but the final book never achieved the popularity The Art of Cookery. (Some sources say this was her first book rather than her third.)

During their twenty-three years of marriage,John and Hannah, who worked as servants, had 10   children, five of whom survived childhood.

*I think of Hannah Glasse as a close friend. Although she was born a mere 231 years before me, her writing style and general approach to life make her seem like a next door neighbor I might swap recipes with.

If nothing else, I will always have a warm spot in my heart for her because of this one phrase:

“Most people spoil garden things by over boiling them. All things green should have a little crispness, for if they are overboil’d they neither have sweetness or beauty.”

Hannah Glasse had a rough life including a stint in debtor’s prison which resulted in her having to sell the rights to The Art of Cookery. In an age of Upstairs-Downstairs, Hannah Glasse was solidly downstairs. Not an educated upper class person like some of the successful women authors, Hannah had worked for years as a servant, and later started a dressmaking shop of her own. She says in her introduction (which seems to be written more for the lady of the house who might buy the book for her servants) that she makes things simple so the information can be understood by the “lower sort.”  For instance, she says, the reader might not understand if she said to use lardoons, so she says bacon.

Economy and efficiency guide her recipes and other household advice.  What’s the point in using an expensive ingredient if a cheaper one will do the job?

“I have known of a cook who used 6 pounds of butter to fry 12 eggs, when everybody knows who understands cooking, that half a pound is enough.” 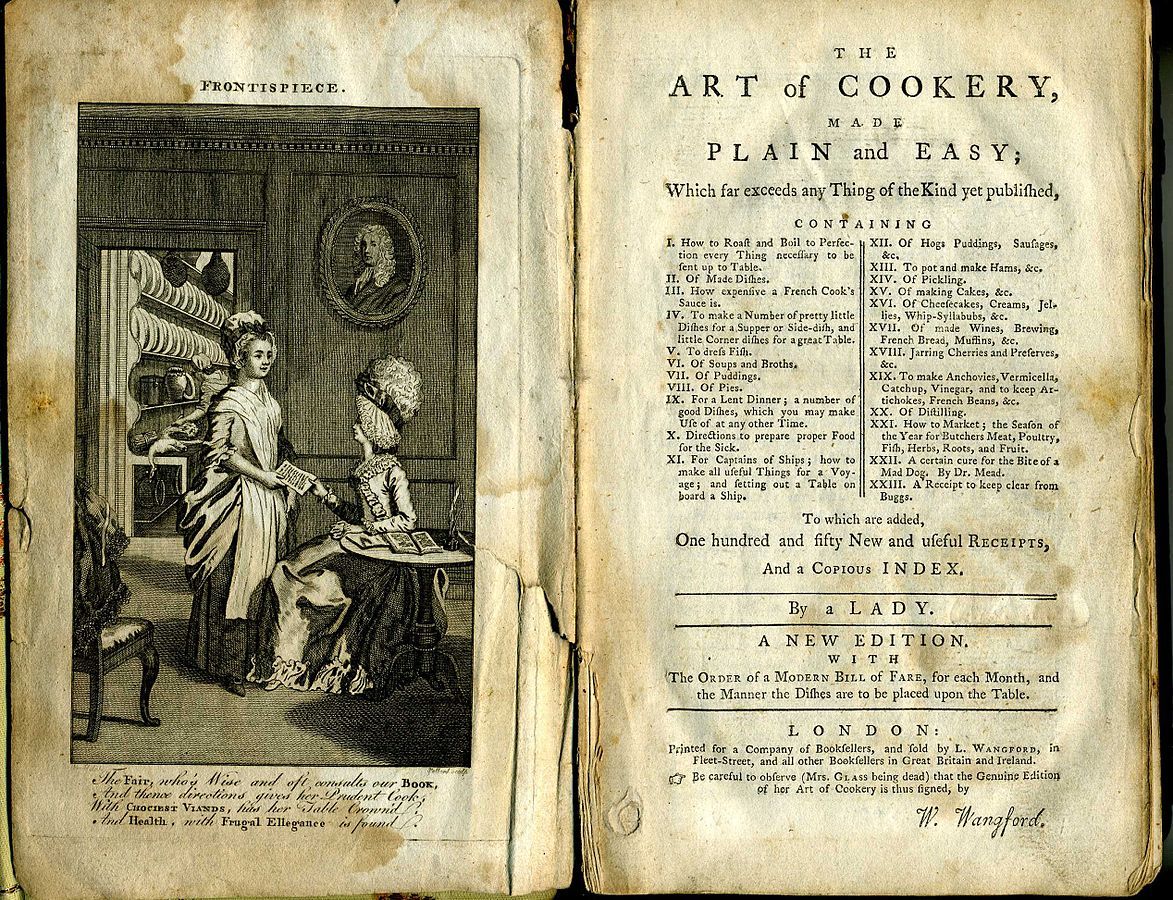 “As marketing must be the first branch of cookery, I shall begin with that table first.”

You must have a strong stomach to follow her instructions on checking whether meat is fresh.  Thank goodness for refrigeration!  Nowadays we feel virtuous if we buy food in season. However our great-great grandmothers were restricted not only in season for vegetables and fruits, but in buying poultry (for instance).

I mentioned earlier Glasse’s recipe for curried chicken–an early use of the Indian style of cooking.

While some of the recipes may sound arcane, her sauces for boiled turkey sound delicious. For instance–oyster sauce and celery sauce.

Take a pint of oysters and set them off, strain the liquor from them, put them in cold water, and wash and beard them, put them into your liquor in a stew pan with a blade of mace, and some butter rolled in flour and a quarter of a lemon; boil them up, then put in half a pint of cream, & boil it together gently, take the lemon and mace out, squeeze the juice of the lemon in the sauce, then serve it in your boat or basin.

Take the white part of celery, cut it about one inch long; boil it in some water til it is tender, then take a half pint of veal broth, a blade of mace, and thicken it with a little flour and butter, put in half a pint of cream, boil them up gently together, put in your celery and boil it up, then pour it in your  boat.

On the other hand, what might have seemed simple to the Victorian era cook–a servant preparing a meal for entertaining a dozen or more people–definitely does not sound simple to us.  “Beat for two hours together”??  Check out this post with a recipe for Seed Cake.

Your Own Copy of The Art of Cookery

There are many ways you can acquire Hannah Glasse’s delightful cookbook and most of them are totally free.  Be aware that the various version will be different, depending on who was editing (and amending) the original.  If you want a real  1747 version just go to ABE Books (and be thankful no one can send you to debtor’s prison).

YouTube Find an audio version of the 1748 version, with editor’s notes laying out the somewhat arrogant sounding corrections and additions made by the editor.

Google Books — Just a few of the many editions available in digital form. All of these come after Hannah Glasse sold her rights to the book.

If you prefer not to shell out thousands for that original first edition, you can find print (reproduction)  copies and various editions for your digital reader at Amazon.com

The Hannah Glasse book continued racking up sales in many, many editions, both during her lifetime and after her death.  Editions popped up in countries around the world for nearly one hundred years after the original publication in 1747. The American printed version that I have, published in 1805, contains a few recipes native to America–Indian pudding, pumpkin pie, cranberry tarts and maple syrup.

If your ancestors owned Cookery, they likely would own the 1805 edition printed in America. Although I have read that Thomas Jefferson and George Washington and Ben Franklin all owned editions much earlier.

I’m happy to have introduced you to Hannah Glasse, who I am convinced influenced many of my female ancestors, even though very few of them hired servants.