What is a Facebook Cousin?  When a cousin you had never known finds you on Facebook, or the two of you belong to the same local group for where you used to live, you may wind up sharing information about your shared ancestors. A Facebook Cousin was responsible for my pursuing these two Kaser relatives and she gave me information as well.

In writing about Austin Jay’s father, Johnathan Kaser, I pointed out that Austin was born February 27, 1884.  Like his father, Johnathan, Austin lived at home with his parents in Clark (Coshocton County, Ohio) until his mid-twenties, and worked at miscellaneous manual labor jobs.

Austin was one of the early members of the Bloomfield Community band formed in 1898. Many of the Kaser clan, including my grandfather Clifford and his brothers Dave and Ed, played in this band.  Austin, listed in this newspaper article, played the tenor horn and trombone.  Since he was only 14 when the band was formed, it is doubtful that he was an original member. 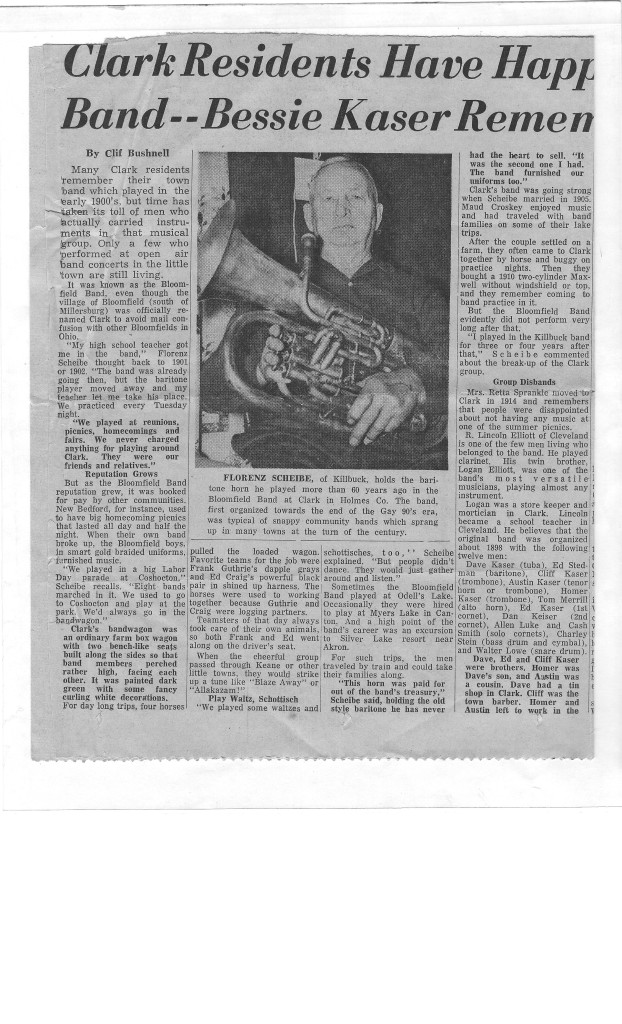 Austin Jay Kaser was married about 1917 or 1918 to Grace Conrad (January1898-July 1964) from nearby Killbuck, Ohio. Grace and Austin had seven boys and three girl between 1884 and 1935. Two of the girls who died in infancy. in a group on Facebook, I came in contact with the daughter of the youngest boy in that family–another Jay– and decided to follow this line of cousins farther out on a limb of the family tree than I usually would. Austin Jay would be my first cousin once removed, and his youngest son, Jay Henry,  a second cousin.

The census reports for 1910 ( when Grace was still living at home with her parents) and for 1920 (after she was married) list her “race or color” as mulatto.  Her father, in 1910, is identified as white, but her mother is listed as mulatto. Creating some confusion, Grace is listed as white on the next two census reports. I am inclined to believe the “mulatto” since it is rare in northern Ohio census reports, and if the census taker were going to err, it would certainly be in the other direction.  I don’t have a picture of Grace, but it appears from other records that she must have been at least 3/4 white, so the fact she was mixed race might now show in a photograph.

I found evidence for her having very little “negro” in her blood (the designation used for black)  in the records for Grace’s mother, Ida McCluggage Conrod. Ida  is listed as mulatto in the 1880 census when she is  four years old. However, in that year, both Ida’s  mother and father are listed as white. It is possible, I suppose, that Ida was adopted. Since my relationship is distant, I’m going to leave all this for someone else to figure out.

With their large family, Austin Jay and Grace must have had a struggle making ends meet since Austin worked mostly as a day laborer. Both of the parents and most of the children completed only the 8th grade in school. One year Austin is listed as an oil field laborer, and another he is listed as a truck farmer, other times just as “laborer.”

The oldest  and third sons, Clarence and Reo, served in World War II, which would have given their parents some anxious moments, but both returned unharmed. Several of the sons died young, however. Only two lived past 60. The oldest, Clarence, apparently was vigorous. He got married when he was 69 years old to a 21-year-old bride. He died four years later, at 73. Ralph, the next to youngest, died in 2005 at the age of 72. Unlike his older brother, he was never married. Daughter Betty, 6th child, lived the longest–she was 79.

The second oldest son, Walter, died at the age of 50, and the fourth son, David, died at the age of 49, just two years after taking a 30-year-old as his second wife. The 4th, 5th and youngest children also died young:  Harold Eugene died at 57, Donald died at 50, and Jay Henry died at 55.

Austin Jay Kaser, 65, of Clark died at 2 p.m. Wednesday at Pomerene Hospital, Millersburg, after a long illness. He was admitted to the hospital March 12 for treatment.
He was born Feb. 27, 1884, near Clark, a son of Jonathan and Amanda Kaser, and was married Nov. 15, 1917, to Grace Conrad, who survives.
He is also survived by seven sons, Pvt. Clarence Kaser, with the United States army in Korea, Pvt. Donald Kaser, Camp Atterbury, Ind., Leland, Harold, Jay and Ralph, all of the home, and Reo of Zanesville; one daughter, Betty, of the home; and one brother, Lester of Clark.
Services will be held Saturday at 2 p.m. at the Clark Methodist church with Rev. Thomas L. Cromwell, pastor of the Millersburg Methodist Church, officiating. Burial will be in the Clark cemetery.
Friends may call at the Elliott funeral parlors, in Millersburg.

Although his mother and father and his siblings lacked a high school graduation, Jay would go on to graduate from Clark High School in May of 1952, [three years after his father died] the only one of Austin Jay and Grace’s children to graduate high school.  While in high school, he was a star on the basketball team. The school principal had to buy him basketball shoes because his family couldn’t afford them. He also performed in the senior class play. Apparently he liked drama, because in 1953, he performed in a community production in Clark, Ohio.

In 1956, Jay Kaser joined the army. By 1957, he had been assigned to the 25th Infantry Division in Hawaii.  His daughter tells me that he broke a leg playing softball in the army and spent most of his time recuperating in a wheelchair, so he did not see active duty in Korea.

In July 1957, he was married in Richmond, Indiana, although his bride, Debbie had grown up in Killbuck and the couple continued to live in Holmes and Coshocton County. (Check out that Ford Fairlane in the background!) 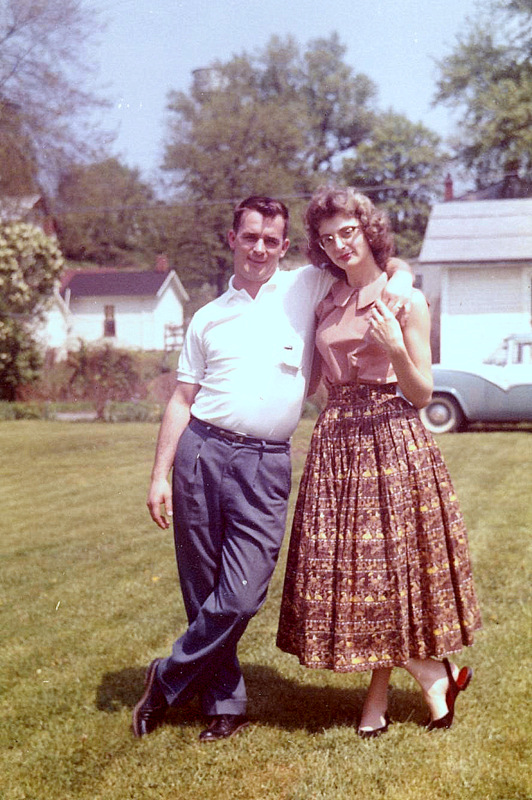 He was back on the softball field in 1963, when there are reports in the Coshocton Tribune of his pitching skills on the team known as the Coshocton Moose.

Adult softball was a very big deal in the area.  I remember spending many summer evenings during the 1950s on the Killbuck HIgh School field watching my uncle and others play softball. It drew a large crowd.

In 1965, Jay and his wife had one child when Debbie filed for divorce, but they reconciled and never divorced. He died in a nursing home in Millersburg in 1990 when he was only 55 years old. 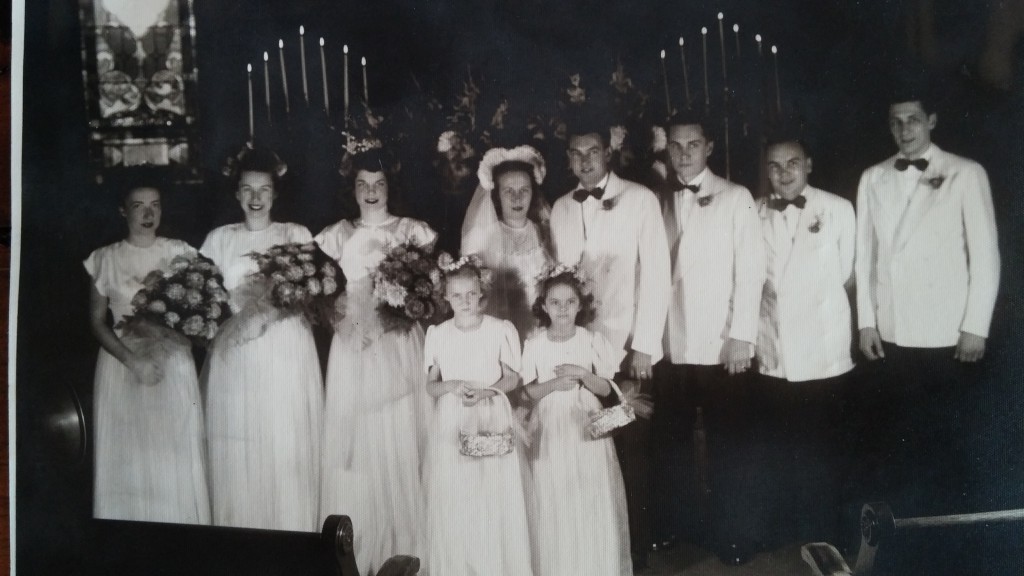 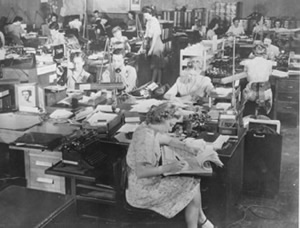