Several of the letters between Harriette Anderson and Paul Kaser, cover the June 1936 trip that she made with some other women teachers to the Texas Centennial Exposition in Dallas. It got me thinking about World’s Fairs and my family’s history of travel. 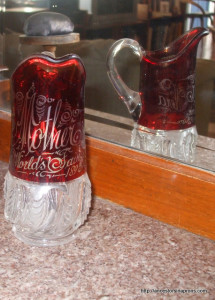 Going to World Fairs seems to be a well-established tradition in my maternal line.  My great-grandmother and her husband went to Chicago for the World’s Columbian Exposition in 1893, and brought home this pitcher for my Grandmother Vera Stout. 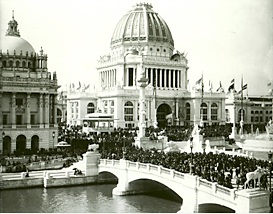 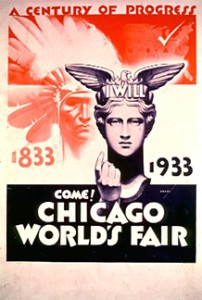 In the 1930’s there was a flurry of World Expositions, and my mother attended most of them.  In 1933 (or 1934–I don’t know the exact date) she drove to Chicago with her mother, Vera Stout Anderson and her sister-in-law Sarah Anderson.  It was the Century of Progress International Exposition, and Vera, who had been to young to go to Chicago with her parents, now got to see it for herself.

In 1936 and 1937, the Great Lakes Exposition was held in Cleveland, Ohio. And although I do not have any proof, they surely must have gone to Cleveland, since they lived so near. 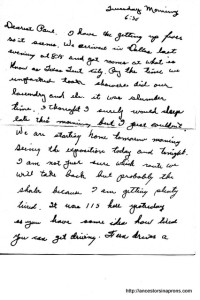 Harriette wrote regularly. This is page one of a 3-page letter from Dallas. Note the temperature!

In June 1936, Mother and her school teacher buddies embarked on a round-about road trip to take them to the Dallas Centennial Exposition.  Her letters show that they traveled through Kentucky, Tennessee, Georgia, Alabama, Mississippi, Florida and New Orleans and Baton Rouge in Louisiana before reaching Dallas. She wrote faithfully, at least every other day. My father, Paul Kaser, tried to send her letters to General Delivery in several cities she passed through, but was not always successful. 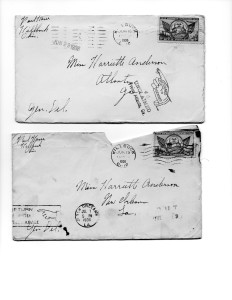 In 1939, Grandmother Vera Anderson was in New York City for the New York World’s Fair. While riding on a streetcar, the diamond was cut from her engagement ring–the most memorable part of the trip, it seems, although there were spectacular things to see at the Flushing Meadows Fairground. 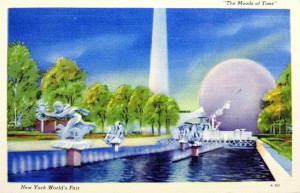 This postcard from the 1939 World’s Fair is used by permission of Joe Haupt who posted it on Flickr with a Creative Commons License.

World Fairs in the United States dwindled after the 1930’s, interrupted by World War II and the recovery from the war, but by 1964, New York was ready for another World’s Fair, and this time it was my husband, Ken, and I who made the road trip–leaving our two young sons with their grandparents in Ohio. 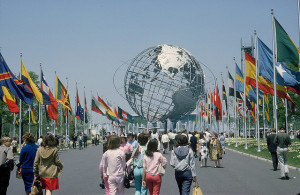 I miss World Fairs–even though I only attended one, I vicariously enjoyed others that I could read about and see pictures of. And by the time my children were old enough to travel long distances, World Fairs were a thing of the past. I guess the closest you can come these days is to go to Disney World in several places around the world.